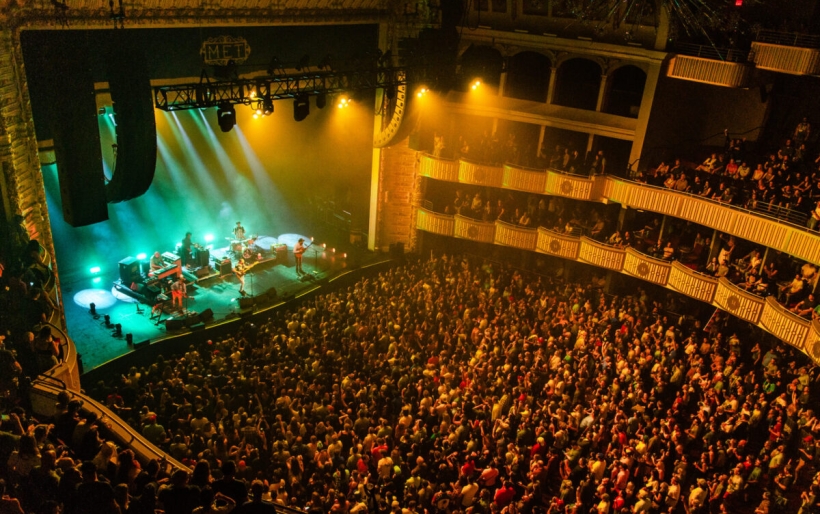 “Best ending yet for a 20-year-old-song!” Toby Leaman exclaimed on Saturday night at The Met Philly. His bandmates in Dr. Dog had just wrapped up a riveting take on their early-catalog rocker “Oh No!,” a song that had the bassist and songwriter reminiscing for a moment about their formative years making scrappy lo-fi records in Philly.

“Hey, we just heard The Khyber is having shows again. If somebody could put in a word for us there, that’d be great.”

Good old Toby. Even as the Philly born-and-bred crew played to a packed house in their über-fancy new hometown venue — “hometown” being relative, as the good Dr.’s have become geographically spread out over the years — he can’t help but wisecracking like he always does, adding to the informality of the night. They might have been playing to a crowd dozens of times bigger than those old Khyber days (or the band’s tenure at The Fire, or Johnny Brenda’s, or the TLA even) but a Dr. Dog show in Philly felt like it always does: catching up with old friends.

The Scott McMicken-led “Oh No!” from 2005’s Easy Beat made an appearance surprisingly early in the show; usually reserved for the encore closer, it was in the first third of the setlist, an auspicious move in an auspicious night. With Dr. Dog’s latest album, 2018’s Critical Equation, already out for a year now, and the band having already played two hometown shows in support of it — XPN’s Free at Midnight, and a Festival Pier headliner — this set felt like a looser, fun-er mix of cuts from all over the band’s catalog.

We were treated to two songs from the seldom-visited 2007 record We All Belong, set opener “Ain’t It Strange” from McMicken, and the soaring “Alaska” from Leaman. We got three cuts from their fan-favorite cassette release Abandoned Mansion, a sadly overlooked corner of the band’s catalog. A Philly premiere of the uplifting new bop “Can She Dance” landed with little fanfare but a lot of energy. The album that got the most play was Be The Void — a treat, since that record was historically less than present in show setlists, even upon its 2012 release — and the clapalong vibe of “That Old Black Hole” and “These Days” had people literally dancing in the aisles.

The one unexpected moment of the night — not as harsh as a shock, not as pleasing as a surprise — was something of a lack in representation for the album widely regarded as Dr. Dog’s best, 2010’s Shame, Shame. The radiant Rundgren-delica vibes of “Where’d All The Time Go” landed in the encore. Those who turned up early for a dazzling set by Nashville’s Liz Cooper and the Stampede caught a cover of “Shadow People” that turned into a collab when McMicken and drummer Eric Slick wandered onstage to join in. Beyond that, there was nothing — which is fine, since next year is the album’s tenth anniversary, so I imagine Dr. Dog is planning something for it.

Below, check out a gallery of photos from the night, including a set of shots from co-headliner Shakey Graves, the project of Austin, Texas songwriter Alejandro Rose-Garcia. His songs were a tad on the average side and perhaps overstayed their welcome a bit, but the performance was tight and profesh, whether Rose-Garcia played solo accompanied by percussion pedals, or with his expansive backing band.

Setlist
Ain’t It Strange
Survive
How Long Must I Wait?
Nellie
Turning the Century
Bring My Baby Back
Oh No
Buzzing in the Light
The Truth
Broken Heart
Go Out Fighting
Can She Dance
The Breeze
Alaska
Be the Void
Army of Ancients
That Old Black Hole
Lonesome