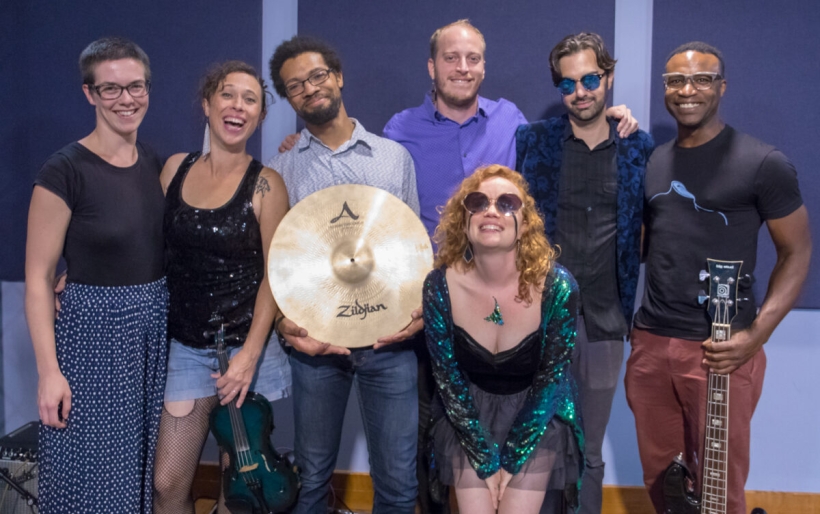 Do you like word games? Good, because Philly’s Upholstery has a few for you to ponder.

First, there are the passive ones, the way their song titles are usually a play on something or other. “The Late Trane” references both mass transit schedules and the person who revolutionized the saxophone in the 50s and 60s. “Constrict the Craw” has fun with alliteration and phonics, “Aten Impaled” with cadence and mythology.

And then there’s the interactive song-puzzle: “Dead as Dillinger,” a rollicking avant-garde jammer from Upholstery’s 2019 album INGA. Its lyrics are drawn entirely from a single movie’s screenplay; the words sung by band leader / guitarist Jeremy Prouty and vocalist Kate Black-Regan are either direct lines of dialogue, or parts of the script re-arranged cut-up style. It’s an ongoing challenge between Prouty and Upholstery’s audience, and to date, nobody has guessed what film it is from without Googling. See if you can be the first.

Beyond the wordplay, though, there’s a cornucopia of weirdly compelling music on INGA, which was released in May on Exotic Fever records. The collective of musicians that back Prouty and Black-Regan — Marty Gottlieb-Hollis on trumpet, Rachel Icenogle on cello, C.W. Kennedy on violin, John Wilder on bass, Christopher Acree on drums — dabble in theatrical drama and lighthearted camp, they’re a bit jazzy and a bit jammy and a bit folky and a bit funky. There are grooves, masks, and mystery.

We’ve seen them in action from afar at Porchfest this summer, and from a somewhat closer perspective at their Johnny Brenada’s album release party in June. But for this week’s Key Studio Session performance, Upholstery gets up close and personal with us and our camera crew, swaying and sweating it out to the aforementioned “Aten Impaled,” a folk song that builds into a feverish dance party, then wraps with a dramatic flourish.

Watch video of that performance below, and listen to an archive of Upholstery’s entire set at WXPN studios via Soundcloud. For more from the band, make sure to see them at Bourbon and Branch on October 4th — a release party for an INGA remix album featuring reoworkings by Johannn Sebastian, George Korien, and more — or catch their return to Johnny Brenda’s on November 7th. Tickets and more information on both shows can be found at the XPN Concert Calendar.