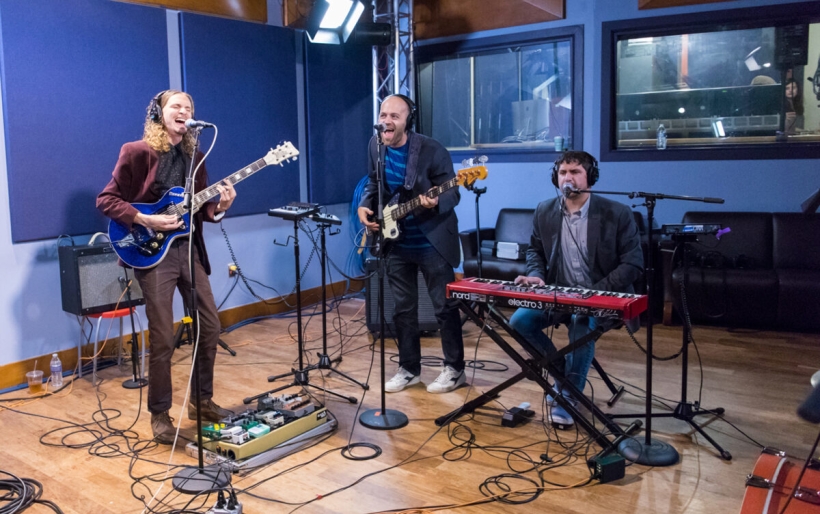 If you’ve spent any amount of time navigating the Philly rock scene, chances are you’ve seen Kirby Sybert. On guitars and harmony vocals, he’s a key side player alongside folks like Ali Awan and Mo Lowda & The Humble. He’s also a videographer and filmmaker who’s collection of work ranges from music videos to medium-length docu/mockumentaries.

On top of all that, Sybert is a songwriter in his own right, and in recent years has truly come into his own. Following the release of the impressive, contemplative single “My Maker” late last year — awash in undeniable tones of Jerry Garcia and Jackson Browne — Sybert has revamped his six-piece live band, FKA The Vibe Tribe, for a busy run of shows and records that found him in WXPN studios this week.

Made up of Dan Rice from The Dawn Drapes on guitar, Lawsuits affiliates Joshua Friedman on drums and Noah Skaroff on bass, Keaton Thandi of Ali Awan’s band on keys and percussion, and keys player John Hildenbrand of Kalob Griffin Band, the players back Sybert expertly in a dynamic performance. Blissed-out tones range from the gentle burner “Ease Fullfillment,” the Laurel Canyon dreamscape of “L.A. Winds,” the urgent “Better Than I Was,” and the suave and sweet song of devotion, “Without You.”

Watch a video of Sybert and the band at work in the studio below, and listen to an archive of the entire performance via Soundcloud. (There’s a bit of a bonus track, too — an instrumental loosely based on the groove of “Better Than I Was.”) Once you’ve taken it all in, proceed directly to Dawson Street Pub, where Kirby Sybert opens the show for Jealous of The Birds’ fall residency at Dawson Street Pub in Manayunk. More information can be found here.