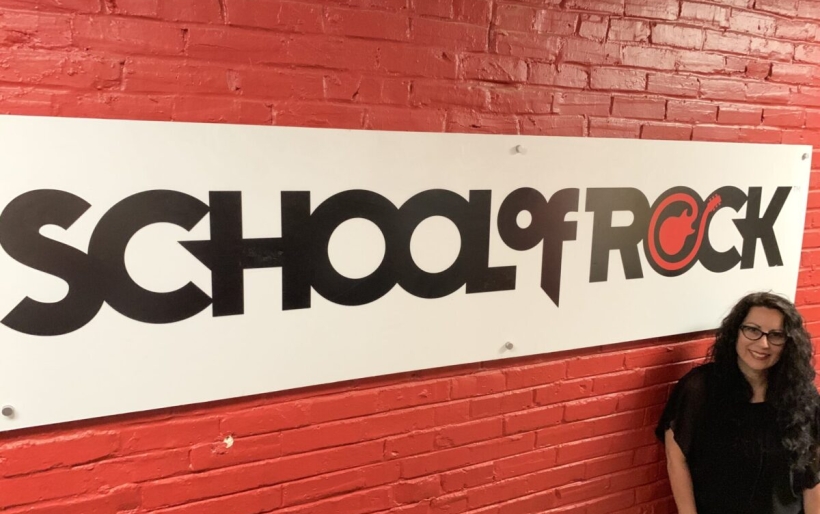 Lisa Riley at School of Rock | photo by Lori Feller

The School of Rock goes deep

School of Rock Philadelphia, formerly known as The Paul Green School of Rock Music, was created by its initial namesake in 1998 as a music educational program for kids who didn’t care to play “Chopsticks” first. These teen-spirited students wanted to skip the line, and go straight to “Misty Mountain Hop,” “Come as You Are,” “Moonage Daydream,” and “Black Hole Sun,” with all the face pulling, arm wind-milling and legs akimbo-stretching that rawk had to offer. And there was Green, making it all possible with huge, friendly doses of tough love training, yelling and preening as his mien. Sure, Green franchised it, had a documentary made of it, and sold it — but the Philly chapter stayed a hallowed ground of sorts, the diamond centerpiece of the School of Rock’s player-first ethos.

“The most important thing from the start has been the intangible, the overall mentality and feel in the building when coming to the school,” says Philly instrumentalist and School of Rock General Manager and Music Director Jace Miller, who has been teaching at SOR since 2014. “We pride ourselves on the staff that we have, which translates to all of the students and families involved.”

What it’s not anymore, and hasn’t been for a very long time in Miller’s mind, is loud and brusque. Loud and brusque all gets saved for the stage. “That starts from the very top with the owner and trickles down through the staff, and can change the experience for everyone in the programs for the better,” says Miller. “Lisa’s awareness, passion, and experience in the mental health field certainly garners a positive energy all around.”

Miller is talking about Lisa Riley, the new owner of School of Rock, who comes from a place of healing rather than howling, as she is a former psychotherapist once specializing in trauma-focused treatment for adolescents and adults.

“Kids today are exposed to multiple daily life stressors that can be overwhelming and lead to symptoms of depression and anxiety,” she said by way of introduction. “Playing, creating, and listening to music is an incredibly effective coping strategy to help reduce the negative impact of these stressors. Performing in a group enables each individual student to build confidence and strengthen their sense of self while fostering a feeling of belonging and connection to others.”

Nobody who ever worked during the Paul Green era probably ever said that. For the old School of Rock, connecting meant plugging in and wailing. This is not to tear down Paul, who no doubt got the job done and helped create and mentor more young musicians to come out of their shell that I can count. If nothing else, he gave Adrian Belew a backing band for life.

But Reily’s background is radically different from Green’s. She received her MSW (Masters in Social Work) in 1995 from Fordham University, is a LCSW (Licensed Clinical Social Worker) in New Jersey, and previously worked at the Center for Family Guidance as an outpatient therapist, treating adolescents aged 13 and older and adults.

“I provided therapy to people who had experienced either a single traumatic event such as a car accident, fire, divorce, illness, loss or had suffered repeated traumatic events that involved verbal, emotional, physical, and/or sexual abuse,” said Riley. “Helping my clients develop the techniques to ‘deactivate’ the impact of their traumas was a big focus on our work. We often explored how to use music either playing, writing, or listening to as a means to calm oneself and help them to become more grounded and centered. Music is a very powerful and effective coping strategy to manage the symptoms of depression and anxiety. It affects and alters our moods and thoughts in very positive ways.”

After working in an emotionally intense field for 25 years and turning 50, Riley was ready for a change. While doing some self-reflection and exploring as to what environment made her happy and calm, Riley kept coming up with a place that involves music and creativity. “What could be a better place to put myself into than a rock school?” she asked.

Upon seeing the School of Rock House Band play at a Festival at Weccacoe Playground in her neighborhood, she enrolled her 11-year-old son (who had already jammed at a Punk Rock summer camp), before doing likewise for her daughter. “I witnessed my son become more confident and comfortable with himself as he progressed in his musical ability,” says Riley, calling the transformation “a newfound confidence that transferred over to various areas of his life, such as academically and socially.”

Riley liked the concept of School of Rock so much, she bought the Philly outpost from Michael Morpurgo who also owns SoR Doylestown and SoR Princeton. “As I have stated, music is such a powerful and effective coping strategy to manage the stressors of life,” Riley says. “Kids today seem to be experiencing higher rates of depression and anxiety, and they aren’t developing the tools they need to cope with things. People need to understand that there is a major physiological component to anxiety, and the key to decreasing the anxiety is to remove the physical tension from your body.”

Playing and listening to music helps keep a body calm as she has witnessed, reducing anxiety and increasing one’s ability to have more rational thoughts and actions. Music is good for the soul, and for society, in Riley’s estimation. With that, she states that the School and the parents of the students she hosts need to take an empowering and supportive approach to teaching the children.

“The Whiplash style of instructing students involves the use of shame, anger, fear, guilt, and can be very distressing and traumatic for anyone to experience,” said Riley. “Empowering students by focusing on their strengths, and providing supportive encouragement, doesn’t mean you can’t still challenge, have expectations, and set limits with the students. It just means you approach it in a kinder, more positive way. You will find that the students will progress more rapidly and have better focus, because their anxiety and self-doubt is less likely to have been triggered.”

This is evident in a collection of Miller’s rehearsal notes for students that Riley shared with us. The positive reinforcement is effusive — “Always fun and you guys are killing it, nice work here,” he writes of the band’s take on Rev. Horton Heat’s “It’s Martini Time”; “Amazing job on this one!” he writes of their rehearsal of “My Iron Lung” by Radiohead — and the critiques are a helpful mix of constructive tips and motivation — “Drums make sure you’re locked in, but I know you were pretty tired by this point, ha,” he writes of a run-through on Queens of the Stone Age’s “A Song For The Dead.” “Keep on this and it will be a monster once again.”

Riley went on to say that a performance-based approach to music education is also key, just as a group experience is important in sports. “But, not every person will play sports or be part of a team, so ‘the band’ helps students develop the key life skills of being accountable and responsible to others. They learn how their actions can affect others. If a student doesn’t know their part of the song, it negatively affects how the song sounds as a whole.”

As music also helps students to develop communication skills, and social skills, one of the greatest things about School of Rock, in Riley’s mind, is that there is a built in commonality: music. “There is automatically something that can connect you with others,” she said.  “For someone who lacks confidence and has a hard time interacting with others, having that automatic connection can be very comforting.”

To go with that sense of community, Riley would like to see the School and its students have more outreach into the Philadelphia school system, and music scene.

“I never understood the lack of presence School of Rock had in the Philadelphia community,” said Riley. “So many people are unaware of what it is and that it even exists. We are trying to change that by building relationships with schools, parent groups, neighborhood associations, music resources, and other organizations. The school hadn’t really been touched in about 10 years. It was very dark, and didn’t represent all the amazing and interesting things that were happening there. We have been renovating the school to highlight how cool it is. We have brightened up the school with new lighting, paint, and artwork. I feel we have achieved the ‘grungy chic’ aesthetic the students were hoping for. We wanted a place that appealed to the parents as well as the students.”

So far, the feedback from students, parents and teachers is positive. “When the time came around, the transfer of ownership to Lisa was quite seamless and a good thing for everyone involved,” noted Miller. “Since the Paul Green era, the programs have matured and adjusted for the betterment of the students and the staff. I will say this, I feel Paul had a wonderful idea and evolved into something amazing and very special. I do not think it would be where it is today if he was still involved, though. Onward and upward, I say. Lisa and I have had many conversations on continuing to improve in every way possible to make School of Rock Philadelphia the best it can be.”

Riley goes on to say that she has encountered, directly or indirectly, multiple students who have shared that they struggle with depression, anxiety, or other mental health issues, and have heard from parents how much being part of School or Rock  has helped their child.

“One conversation I had in particular with a parent stands out to me,” said Riley. “This parent of a 10-year-old child told me that her child had been struggling with ADHD , and had become depressed and withdrawn the past school year. She felt that she didn’t recognize her own child, and shared that once her child began participating in School of Rock, she began to see her child ‘come back to life,’ and was so happy and relieved that her child found a place where she fit in and belonged. I have witnessed this child make connections and  develop relationships with other children, and the child always presents with a positive energy and enthusiasm at School of Rock.”

A new ownership celebration takes place at School of Rock, 421 N. 7th Street, on October 19th from 4 to 9 p.m. House bands will perform, as will Miller and other instructors, and the event is free and open to the public. More information can be found here.