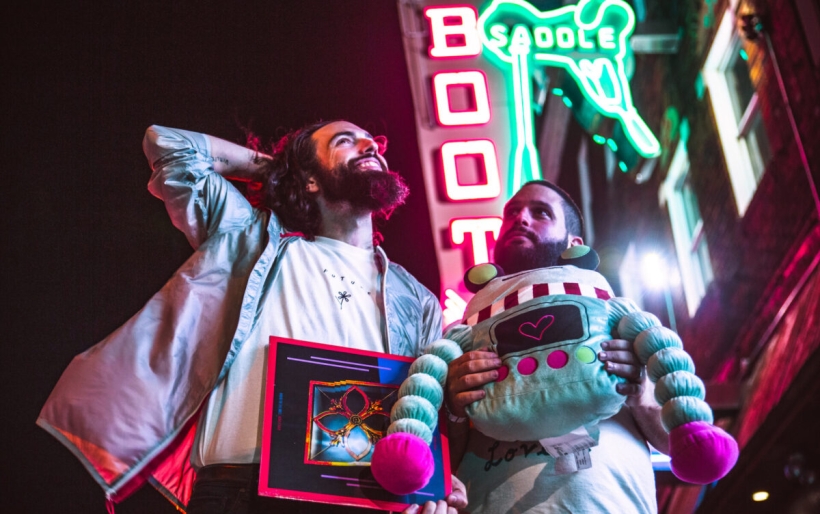 “In a way, this night and this record is the culmination of everything for us,” Isaac Clark told a packed house at Boot & Saddle. “Not that we’re going to stop being a band or anything. This is too fuckin’ fun.”

But to Clark’s point, Honeytiger — the garage rock duo he fronts with Josh Glauser on drums and vocals — has been hard at work for years in the Philly indie scene, ever since coming together under their previous name, Swimmer, back in 2015.

They released an awesome record, Half Clean, and a couple EPs that found their jams becoming more imaginative and sophisticated, while remaining rooted in the bluesy garage / pop sound that got them started. They found themselves immersed in a community of bands and friends under the Good How Are You Records banner, and folks from that community turned up in force last night: to name a couple, Trash Boy’s Dan Baggarly was in the house and got several birthday shoutouts from the stage, while Secret Nudist Friends’ Matty Klauser (who runs GHAY) was dancing front and center for Honeytiger’s whole set.

Add in the mix a killer new record called Brain on the Wall — which is, in Honeytiger’s estimation, the fullest realization of their creative vision to date, and in our estimation the best and most powerful sonic presentation of it (shoutouts engineers and producers Dan Taney and Jamie Clark) — and a lineup with scene friends old and new, and the Boot & Saddle gig effortlessly put the “party” in “album release party.”

The relatively new four-piece Yeenar opened the night with a mix of pop hooks that reminded me of The Cardigans and heavy, intricate arrangements from the aughties nu-metal school. (One mid-set song had definite Deftones vibes, but perhaps that’s because singer-guitarist Andy Slepman noted the drop-D tuning heading into it, and made a Breaking Benjamin joke. As The Key’s Rachel Del Sordo commented to me in the crowd, “once you’re namedropping Breaking Benjamin from the stage, all bets are off.”)

The Vernes took the middle slot of the night, with a newly expanded lineup with bassist Jesse Defrancesco allowing previous bassist Cole Berggren to move over to keys and endless chill pop charisma and sick leads. Matthew Gragg’s delivery was on point and endearing as he bopped around at center stage and leaned into the mic to make room for Fabian Mera’s axe-swinging guitar solos. Fan fave “Fcking Drones” was a highlight, and their new releases Yr of the Rat and Maybe I’ll feel Better When I’m Dead were well-repped.

And for their part, Honeytiger burned across an hour-long set that featured an almost album-in-full performance of Brain on the Wall with Clark throwing himself full-body and hair-in-face into his songs, while Glauser kept the composure and the beat. There was some roasting of one another (“your kick mic fell out” “well fix it, then, I’m kind of trapped back here”) but it was clearly lovingly done, as evidenced by the duo’s hearty embrace at the end of the show.

Check out photos of Honeytiger’s album release party below, and read an interview with the band by Emily Herbien here.