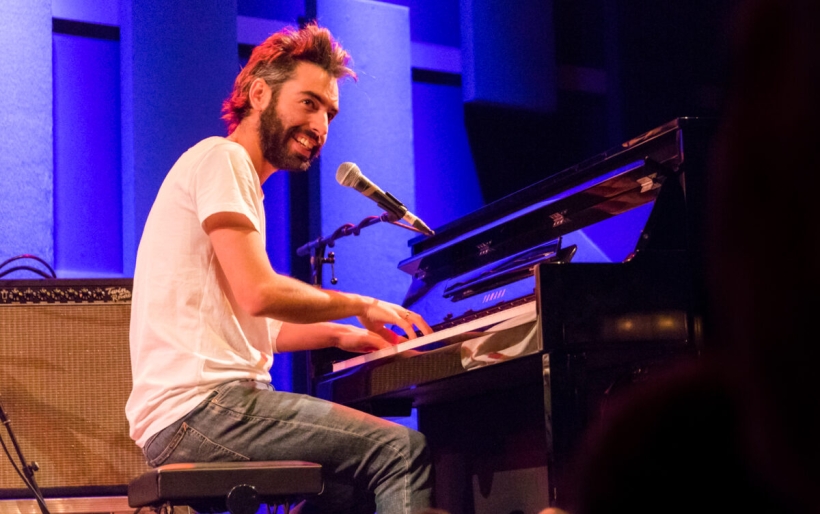 “For my last record, the first show of tour was right here doing a Free at Noon concert,” Montreal singer-songwriter Leif Vollebekk told World Cafe Live this afternoon. “The last show of tour was in this room, too. And here I am again.”

Somebody in the crowd shouted out “Full circle!” which prompted a warm smile from Vollebekk as he sat behind an upright piano. “That’s what it is, it’s full circle,” he said. “I can tell that the last show of the tour is going to be right here, whenever it is.”

As it happens, Vollebekk’s headlining date at World Cafe Live comes a bit sooner than that. His new album, New Ways, is out on November 1st, and he headlines World Cafe Live on Friday, December 13th before playing D.C., doing a west coast run in early 2020, and then heading to the UK in the spring. But album cycles are expansive things, and if Vollebekk wants to bring this cycle to a close in the same place, this Philly audience would gladly have him.

Vollebekk has an immaculate voice and an innate sense of melody; his songs are delicately arranged, soul-inspired singer-songwriter pop, recalling the likes of Josh Rouse and Ryan Bingham. Or Norah Jones, who Vollebekk told the audience that his slow-burning new song “Phaedrus” owed a debt to.

“I like Norah Jones a lot, I think you can tell,” he said leading into the song. “Or maybe you can’t tell. I shouldn’t have told you. Don’t tell her if you see her.” He teased it with a tiny bit of “Don’t Know Why,” exclaiming “SO GOOD, right?” before leading into his own smoky, soaring original, backed expertly by a string-forward ensemble.

With Jessica Deutsch and Blanche Isreal on cello and violin, John Kimock on drums, and Michael Felber on bass, the opening “Vancouver Time” had a delicate chamber pop vibe. A thrumming single-note drone from Deutsch and Isreal guided the set into the single “Hot Tears,” which was warmly received by the crowd. “This is my first time onstage with them,” Vollebekk said before “Into the Ether.” “I’m freaking out. Those strings sound so good.” They lifted the song into delicate, spacious atmospheres to back his existential lyrics: “Sometimes you question life itself / sometimes you just go home with yourself / and take it out on the mirror.”

Vollebekk tackled the ballad “Apalachee Plain” solo acoustic, with a touch of yodeling at the end, and then brought the band back for the stirring “Elegy,” for which he revealed another source of inspiration — “I Dream A Highway” by Gillian Welch. The sprawling journey of “Transatlantic Flight” and the thoughtful “Elegy” brought the set to a close, but Vollebekk will be back sooner than later. And then back again, if the circle continues as we expect. Get details on his December show at the XPN Concert Calendar and see photos from today’s Free at Noon concert below.