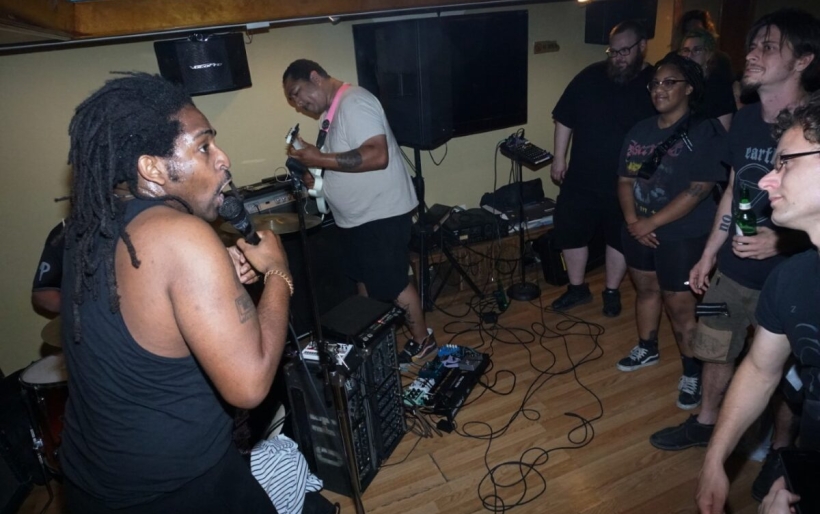 Philadelphia punk outfit Soul Glo likes to experiment, and the best place to find them doing so (or at least the best place that’s not onstage at a gig) is their Soundcloud page.

While that platform provided a home for several of the tracks that eventually wound up on their 2019 album The N____ In Me Is Me, it also gives them a space to try unexpected ideas out as standalone releases. There’s drumloop screamer “Pressure’s On My Knob,” for instance, which is bookended with John Carpenter-esque trap textures, or the heady and hard-hitting “Mathed Up,” which packs a massive amount of information and views into a two-minute rager.

This weekend, a song from Soul Glo’s Soundcloud lab made its way onto the band’s more formal streaming platforms, care of SRA Records. “Too Late” thunders across a minute 46 seconds, with vocalist Pierce Jordan alternating between caustic screams and chilling goth-ish vocal melodies — a new element to the band’s ever-expanding sound.

Soul Glo has a few Philadelphia gigs next month. November 3rd, they play with .gif from god, mattachine, and Binary at Everybody Hits (details here), and on November 24th, they headline a benefit at Boot and Saddle with Love Club and Big Scary Indian, raising money to help with scene friend Mitch Esparza’s medical expenses (details at the XPN Concert Calendar).