Jay Som Opens Up: Beyond the bedroom pop of Everybody Works and into the rich luster of Anak Ko - WXPN 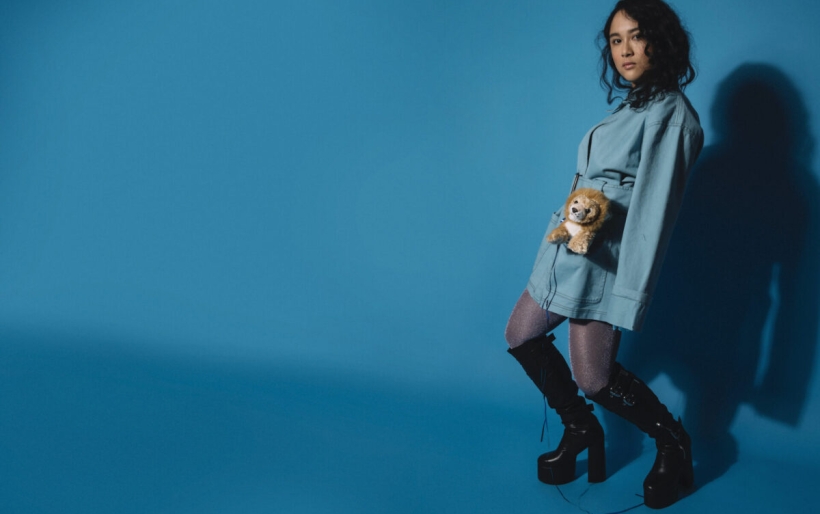 Jay Som Opens Up: Beyond the bedroom pop of Everybody Works and into the rich luster of Anak Ko

Before Jay Som and the woman behind that dream pop nom de plume, Melina Duterte, appear at The Foundry October 29, I had a brief, but lovely talk with her, and several good long listens (again) to Anak Ko, her playful pre-autumn release.

Unlike her previous, lonely long play efforts — 2016’s Turn Into, and 2017’s game changing Everybody Works — Duterte’s more recent work is gently expansive and openly friendly. The dream behind her usual dream-pop mine has become more real and less imaginary, hypnotic and repetitive, but livelier and funkier, and, overall more conversational than quiet.

Sure, a large part of that lonely vibe stems from the fact that her first two records were complex but self-contained, home-recorded, lone wolf work — the very stuff of the bedroom pop tag that’s long been her reward or bane, depending how you see it. She played all of its instruments and produced all of their sounds. Mostly, though, the progress of Anak Ko seems less solitary because it is freer, more sociable — literally and figuratively, in that it is more populous with contributors (Chastity Belt’s Annie Truscott, Vagabon’s Laetitia Tamko, Boy Scouts’ Taylor Vick). It’s also more open, radiant and brimming with love, starting with the story behind the title itself. “‘Anak Ko’ means ‘my child’ in Filipino, and that is something that my mom texts me,” said Duterte. “She would write ‘Hi anak ko, I love you anak ko.”

Another element of Anak Ko that makes its adoring allure more charming and open is the album’s confidence and its sleepy sleekness, the former stemming from the fact that Duterte is more about health and balance than ambition. Rather than jump into bigger tours and “Everybody Works Pt2,” she slowed her roll and focused her life.

“Ambition is a big part of a career,” she said. “Without it, I wouldn’t have an album, or three of them. I always wanted a career in music, but, I think I’m pretty chill about it. Then again, I never thought I’d get to this point – have albums, have a record label.”

I ask if she is chill about everything in your life, music aside, and she responds that she is not.

“Overall I think I’m a chill person,” Duterte says. “But, I’m not chill about absolutely everything.”  One thing that probably helped her maintain a chill on the new album is the fact that Duterte quit drinking and became vegan before she made its music. “I think about that word all the time when it comes to being sober and not drinking,” she said of the idea of clarity.  Lucidity didn’t come all at once or suddenly as soon as she put down the bottle. “Not at all. This was the hardest thing ever. But it felt good, and six months in — with time to digest — it began to feel good and I met other people sober and looking to stay sober and you form a camaraderie.”

The concept of camaraderie is very much a part of one of Anak Ko‘s most intriguing tracks, the bass heavy “Get Well.” The final song on an album filled with blunt, ambient mood swings, glitch soul and dreamy guitars, comes across almost like a suite, as if it is two or three songs stuck together. She seems genuinely surprised that anyone found her out.

“You’re the first person to notice that. It’s a funny thing. I was on bass and my girlfriend was on guitar. I had most of my part finished, or at least I thought so – then she started playing this riff that was a perfect compliment to mine, but different. It’s two halves of one idea or two ideas with two people.”

Before she took on Anak Ko, she began producing other artists — perhaps as an extension of the camaraderie of which she speaks —with Chastity Belt and SASAMI among them.  “I’ve always been very curious as to what it would be like. I dabbled in it when I first started recording music back in 2016. Just friends. That became my introduction to producing. And let’s be frank. I still have a weird definition of what producing is in my head. To me it’s just you are helping people. Recording them.  I think that the Steve Albini approach is the right way to go,” she said of the man behind Nirvana, Pixies, PJ Harvey and more. “You’re just facilitating a band to see their way through to what they want to do. I’d like to carry on and do this if and when Jay Som fizzles out.”

That fizzle is pretty doubtful, but for someone clear enough to quit drinking and go vegan for the sake of clarity, Jay Som seems like nothing else if not a pragmatist.

Jay Som plays The Foundry of the Fillmore Philly on Tuesday, October 29th. Tickets and more information can be found at the XPN Concert Calendar.