Free at Noon Flashback: Joseph Arthur and his bag of tricks bring songs of love and empathy to World Cafe Live - WXPN 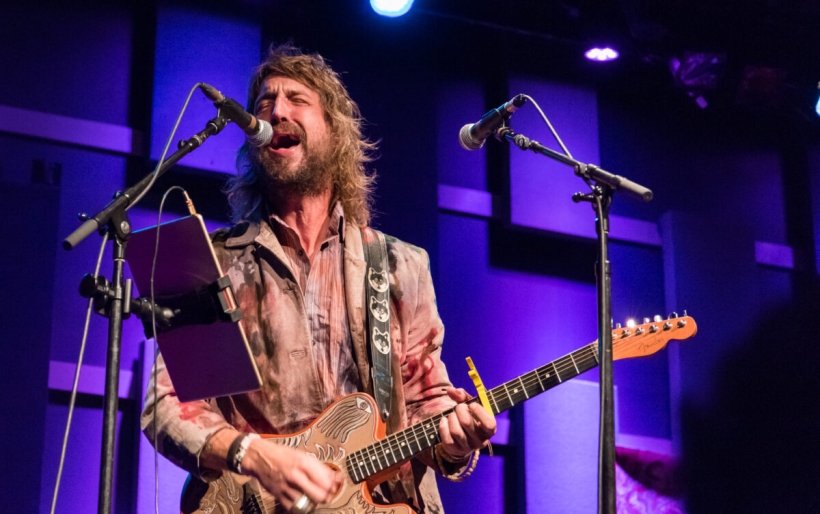 Free at Noon Flashback: Joseph Arthur and his bag of tricks bring songs of love and empathy to World Cafe Live

Over his two-plus decade career, Joseph Arthur has taken a spectrum of approaches to his music. He started as a solo troubadour, and was among the first to bring sound looping into folk rock. He got together a band, and over time he got rid of the band. He’s been a painter the whole time through, sometimes using his visual art as an active component of the set — live-painting and selling the canvas post-performance — and other times using it as a backdrop.

Today’s performance at World Cafe Live for WXPN’s Free at Noon concert was a return to Arthur’s roots, in a way. He took the stage by himself, surrounded by a literal bag of tricks: a binder of his prints, which adorned the venue’s back wall, and a suitcase that contained a bevy of loopers, reverb pedals, and an iPad. The mission at hand: showcase his new album Come Back World ahead of tonight’s performance at the Manayunk venue The Locks at Sona.

The technology might have improved since 1999, but Arthur’s approach remains the same — creating textures with his guitar or voice, and quickly building them into a rich, intoxicating, emotional blend. On the opening “Tomorrow Today,” he stomped a kick drum pulse on a pedal while strumming an electro-acoustic guitar and singing about the depths of devotion: “Loving you makes me believe in tomorrow today.” The beat on “I’ll be around” was built by slapping the strings, and Arthur’s words here offered solace: “If you wanna cry in my shoulder / I’ll hold you here in my arm.”

“Pale Fire” was built around a searing electric lead, while “Mayor of The Lower Eastside” found him affecting a Bowie-esque vibrato, particularly on a lyric about metropolitan ennui: “The city is heaven here just shy of defeat / Where the freaky people meet.”

The second half of the set found Arthur tackling more lyrical introspection — ruminating on regret in the fervent strummer “Biggest Mistake,” and contemplating self-love on “Make It True”: “You got to give yourself permission to be who you are.”

After an outro and a warm embrace with WXPN’s Dan Reed, the fervent crowd brought Arthur back out for an encore of “Streetcar,” making for a total of nine out of Come Back World‘s ten songs performed tonight. See him tonight at The Locks and maybe he’ll do “Somewhere With You” — tickets and more information can be found at the XPN Concert Calendar.