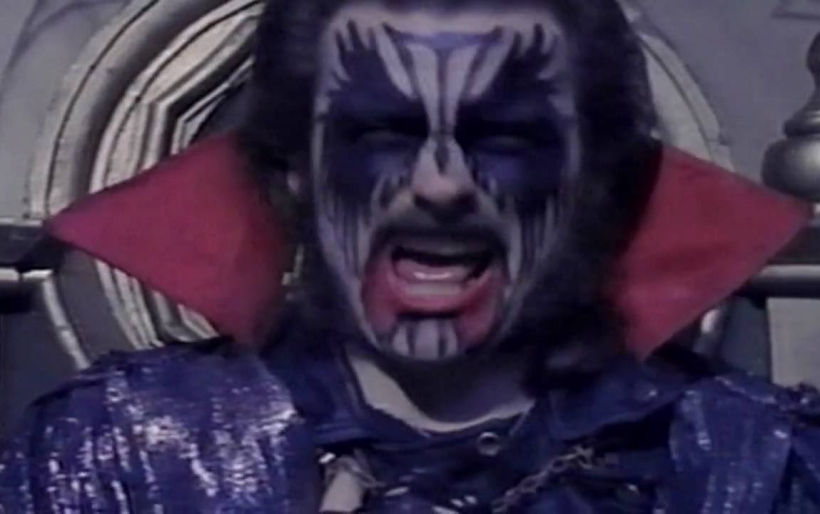 The Skeleton Key: Get nerdy this November with a .gif from god, a Jpegmafia, a Black Midi, and King Diamond

It’s two days after Halloween. My stomach hurts from the steady diet of peanut chews I’ve been on for the past week and my face is a weird mess of makeup and fatigue. I’ve had The Misfits stuck in my head for what seems like a year but is probably just from when Devil Master did an incredible cover set on Mischief Night.

Hello Philadelphia! Welcome to the post-spooky edition of The Skeleton Key. I have a huge mess of shows to tell you about, as usual, so cue up some tunes, pour a cup of tea, and let’s get into it.

Keep those seasonal vibes going this afternoon with The Key’s John Vettese and Maureen Walsh at their DJ gig at The International. This might not be promoted as the Halloween edition of Everything Is Beautiful but that shouldn’t stop you from badgering them to play some Philly classics like “Mind’s Playing Tricks on Me” by Atom and His Package or DJ Jazzy Jeff & The Fresh Prince’s “A Nightmare on My Street.” I mean, seriously, look at this video:

Take Monday off from going to shows. You’ve earned it. Also, there just isn’t much going on. Take the time to research the elections happening the next day. While you’re at it listen to recent stuff from Ecstatic Vision, Chained Bliss, and two newly released very old songs from Hex Nine, which is a synth punk band that’s members of Northern Liberties and Bad News Bats.

On Tuesday you’d be remiss if you didn’t end up at Boot & Saddle for Quintron and Miss Pussycat, the greatest theatrical swamp rock organ puppet show dance party that’s ever existed. It’s also, as you might well imagine, one of one. If you’ve never seen Quintron you are truly missing out. They’re a treasure. Also playing are Evil Sword – it’s their record release! – and Three-Brained Robot.

Other shows happening that night include lauded rapper Jpegmafia at Union Transfer, Superchunk at World Cafe Live, and a new-ish band that’s members of Algernon Cadwallader and Dogs on Acid called Everywhen on a gig in West Philly with Cheer Up and more.

Magnetic Bells – that’s Jordan Burgis from Honey Radar/Magnetic Dog with Alison Stout and Darian Scatton of Hallowed Bells – is at Vox on Wednesday with Ami Dang, a sitar player and producer from Baltimore who combines classical Indian music with ambient electronics. This is one of two shows Burgis is playing this week, so if you’re me and more likely to go see All Else Failed at KFN that night catch him on the 10th at Brickbat. More on that later.

Thursday night marks the return of the Free Library’s Song-Poems series with a performance by lo-fi sweetheart Karl Blau (K Records), who recently relocated to Philadelphia from the Pacific Northwest. At Pageant Musica Practica / Elettronica Viva is hosting The Eternal Now, a Buchla Music Easel A/V collaboration with filmmaker and artist Jeffrey Perkins, and electronic composer Marcin Pietruszewski. iNFiNiEN, Upholstery, and Naeemah Maddox are at JB’s and down at Century in Greys Ferry there’s a cool metal and noise rock show with Black Lung, Faking, Queen Elephantine, and Mutant Flesh.

The solo Radiator Hospital show happening at Repo Records next Friday is special not just because every Radiator Hospital show is special and not just because it’s probably been a hot minute since you’ve been to a show on South Street. Well, let’s be honest, that’s a good chunk of it right there. But still, the chance to eat a slice from Lorenzo’s while watching Sam Cook-Parrott play at a record store alongside Bloomington’s Amy O, who has been putting out absolutely fantastic lo-fi pop albums for 15 years, is not something you should pass up.

If it’s noisier stuff you’re into, check out the show at Ortlieb’s that night with Japanese instrumental post-punkers Transkam – I’ve seen comparisons to Trans Am (and not just in the name), which is way cool – and locals Kohoutek and Mesmeric Haze. Also that night is a performance of “American Odyssey” by the five piece Space Whale Orchestra at the Maas Building. Originally commissioned by the Philadelphia Jazz Project for an event at the Barnes over the summer, the piece was arranged by pianist Erica Corbo and features songs from across the musical spectrum, ranging from George and Ira Gershwin to Mississippi John Hurt to Arcade Fire.

Saturday you have a choice between a number of great shows. At Circle Spaces in South Philly Reef the Lost Cauze and a bunch of other folks are playing the TurnUp to BailOut benefit show “raising money for the Philadelphia Community Bail Fund’s campaign to bail out incarcerated people during the holiday season.”

While Mt. Vengeance, I Think Like Midnight, and Double Wig (Clint from Bardo Pond) are all relatively new bands the people in those bands are of a certain vintage, so to speak, which makes the fact that they’re playing at The Khyber that night definitely a bit of a throwback to the club’s heyday. I’m glad to see a real mix of shows happening at the newly reopened space.

Over at Pageant it’s the final in Nick Millevoi’s Streets of Philadelphia series – I did a long interview with Nick last month that you should check out – and out in West Philly the Monthly Fund is holding a benefit for the Poor People’s Economic Human Rights Campaign with performances from Littlun, Philadelphia Women’s Slavic Ensemble, and the Matt Hollenberg and Julius Masri duo.

So many choices! My plan is to hit one of these up, which one I’m not sure, but I also want to make sure to stop by the final Inciting party, which is going for 24 hours starting that afternoon. If you’re not familiar, Inciting has been serving as host to all variety of electronic music for the past 14 years. They recently announced that they would be closing, leaving a gaping hole in the subcultural landscape of the city. While I’m sure the people involved will start up something new that doesn’t make this any less sad. You can read a bit more about it on their Facebook and in this interview I did with Justin from the space as part of a longer piece I wrote about the WKDU Electronic Music Marathon, which he DJ’d.

The next night the choice is a lot more simple. Do you like metal? Go see King Diamond at The Tower. Do you hate metal? Too bad. Go see King Dia… wait, no, that’s probably not it. I don’t think anyone at the Alexander (that’s David Shapiro from Connecticut psychers Headroom), Jordan Burgis (Honey Radar), Jesse Sheppard (Elkhorn) show at Brickbat Books will be rocking any corpsepaint or using a mic stand made out of human bones but you never know!

Monday there’s a great show at KFN with three heavyweights from England in the 80s: Chameleons, Theatre of Hate, and Jay Ashton from Gene Loves Jezebel. If you have any interest in post-punk and goth music you need to be at this gig.

I could say the same thing about the Black Midi show at the Church the next day, which is also very much can’t-miss if you’re into post-punk that is fun, intelligent, and super catchy. Like Girl Band, who played one of the best shows I went to last month, Black Midi is on Rough Trade Records, which has a long, long history of putting out interesting and awesome music.

Anika Pyle from Chumped and Katie Ellen is playing the second Song-Poems event of the month at the Heim Center of the Free Library on Wednesday. Also that night at Underground Arts Spacin’ is opening for the always entertaining Moon Duo.

Unseen Rain – that’s June Bender on violin, Alban Bailly on cello, Ashley Tini on vibraphone and percussion, Matt Stein on double bass, and Mike Szekely on percussion – are at the Maas Building Thursday to play songs off their recently released debut album Out Beyond. Also on the bill is the Veronica MJ and Matt Engle viola and double bass duo and another made up of bandoneon player Shinjoo Cho and Kinan Abou-afach on oud and cello.

The final night on this first half of November calendar is Friday the 15th where there are four great shows happening, the biggest being Lifetime, Gouge Away, Truth Cult, and Praise at the First Unitarian Church. It’s also quite sold out, which is honestly not surprising. Despite officially reuniting almost 15 years ago, Lifetime haven’t put out anything in a dozen years and basically play on their own schedule. Which is to say that this run of shows is your rare chance to see one of the New Jersey’s finest bands from the 90s and certainly one of the few from that era and style that still holds up.

While I never got to see Lifetime during their initial run I was obsessed with Hello Bastards, their 1995 album that was released on Jade Tree. When I was 19 and taking the train up to NYC all the time I’d always put that CD on the second New Jersey Transit left Trenton. I’m not from New Jersey but it just felt like the right thing to do. “Daneurysm” is still one of the best opening tracks on any album and you better believe they’ll be playing it at the Church that night to a sweaty crowd screaming all the words back at them. I went to both reunion shows in 2005 and saw them again four years later at the Court Tavern in their hometown of New Brunswick. It’s been a decade so I’m probably due.

If like me you don’t have a ticket either work on your hustle or check out one of the other good shows happening that night. At Jerry’s on Front there’s an absolutely awesome all-locals post-punk gig with Blowdryer, False Tracks, and Potion 200. I know I’m probably repeating myself from the last time I mentioned False Tracks in my column but they put out one of my favorite local albums of the year, Either World, in September.

There are also not one but two good avant/experimental performances that night. Former Philadelphia resident Tatsuya Nakatani is bringing his gong and other percussion to the Evangelical Lutheran Church of the Atonement in Fishtown for a truly fun Fire Museum Presents show alongside the Christian Moehring and Victor Vieira-Branco drums and vibraphone duo. And last but for sure not least the final show for this half of November is “Neil Feather: Sound Mechanic” at The Rotunda, presented by Bowerbird. Feather is a composer, inventor, and artist active since 1970 who has designed and built a ton of fantastic instruments of his own imagination including the downright onomatopoetic “Wiggler” and “Thunderwheels.” This concert will be of a work-in-progress concerto written by Feather collaborator Rosie Langabeer that features a number of his inventions being played along with the Arcana New Music Ensemble.

As always feel free to hit me up on Twitter with any tips, tricks, or tickets to sold out shows at @talkofthetizzy! See you in two weeks!