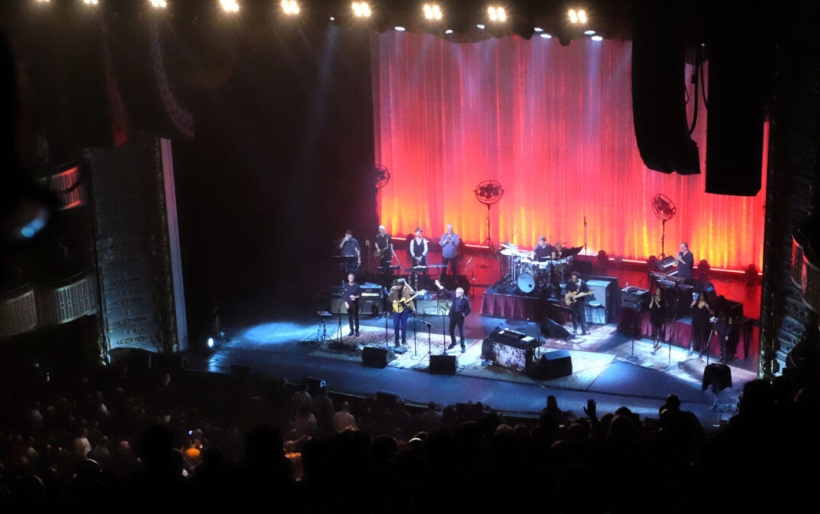 Surveying a new(ish) Steely Dan at The Met Philadelphia

By A.D. Amorosi
November 07, 2019
01:11 PM
Share
Steely Dan’s Donald Fagen and Walter Becker once said (or at least they named their 1972 debut album as such) that you “Can’t Buy a Thrill.” But, for longtime Steely heads and Dan nerds, hearing that the ultimate album act was performing its albums in their entirety at a Beacon Theater residency was such a thrill. That several of its classics, starting with Aja last night would be executed at The Met Philadelphia, was even more of a snarky, angular jazz-pop sensation worth celebrating. Check them out Friday and Saturday and tell me I’m wrong.

Though rarely performing as a live unit, Becker and Fagen changed all that after the latter’s New York Rock and Soul Revue became a thing between 1989 to 1992. Not long after that, Steely Dan slowly became an act that you could rely on seeing nearly every summer, and always with a crack team of sniper-precise musicians apt to ape the cherished album versions of sacred Fagen-Becker song.

With the sad passing of Becker in 2017, Fagen’s partner-in-rhyme since their student days at Bard College, something may have shifted in the singer-keyboardist, something that allowed the sleek sound of Steely Dan some mud, and necessary friction. Something new.
After lead guitarist John Harrington offered up sweet, impactful Becker-like solos throughout the evening, with Fagen thanking his partner (“who could not be here tonight”), a large portion of that fresh energy and zeal came down to two players: drummer Keith Carlock and second guitarist Connor Kennedy.

Yes, Carlock’s been a part of Steely Dan since playing on 2000’s Two Against Nature and Everything Must Go in 2003. But his stick work sounded as if he was hungry for the gig, and turned the raging finale of the placidly, zig-zagging Aja, into something manic and in-the-red. Sure, I could have lived without the show-ending extended drum solo, but, that’s a rule of life, and not just one gifted to this drummer (P.S.: When Mick Fleetwood pulled the same shit, only at 20 minutes long with lots of mic-ed grunting, Sunday night for the Fleetwood Mac show at Wells Fargo, I left my seat and got a drink. F that).

Woodstock, NY’s newbie Connor Kennedy just took on his role, and during a buoyant “My Old School,” and a frantic “Bodhisattva,” let loose with the sort of frank, blistering solos one could expect from Thurston Moore.

While all that didn’t make Steely Dan into noise-mongering Sonic Youth types, it did give them a necessary edge to match Fagen’s aging, ragged but still righteously soulful vocal squeak. Singing a tad into the baritone range that we’re used to hearing from him, the swift kick of “Reeling in the Years” and the oblong R&B of “Black Cow” found Fagen using a relaxed, raspy sing-speaking tone. The frazzled blues of “Black Friday” and the coolly cosmopolitan “Home at Last” pushed Fagen to a more authoritarian, chesty cackle-croon.

What Fagen couldn’t completely handle himself, he left to the Danattes – Latanya Hall, Carolyn Leonhart, and Catherine Russell – to fill in the blanks, fulfilling roles that went far beyond their usual backgrounds. In fact, the singer-electric pianist-melodica player even gifted the trio with “Dirty Work,” a nearly-forgotten hit in Steely’s catalog. Frankly, while I don’t recall who sung it in the first place, I won’t soon forget this trio’s sensually soulful take.

Saxophonist Roger Rosenberg and a small crew of able-bodied brass and reeds men made the chilled and intricate arrangements that long accompanied the Aja opus – a slippery “Deacon Blues” and a poppy “Peg,” in particular – steamily sultry and worthy of an Ellington-ian black and tan fantasy.

Capturing Aja by the tail was a hard trick, and this version of Steely Dan grabbed it, tamed it and made it sweet, yet frisky. And for all of the added edginess, they’re still smoother than the mix of “Cuervo Gold and fine Colombian” that filled their familiar “Hey Nineteen.” Let’s see what they do the next two nights.
Related Content
View All Related Content