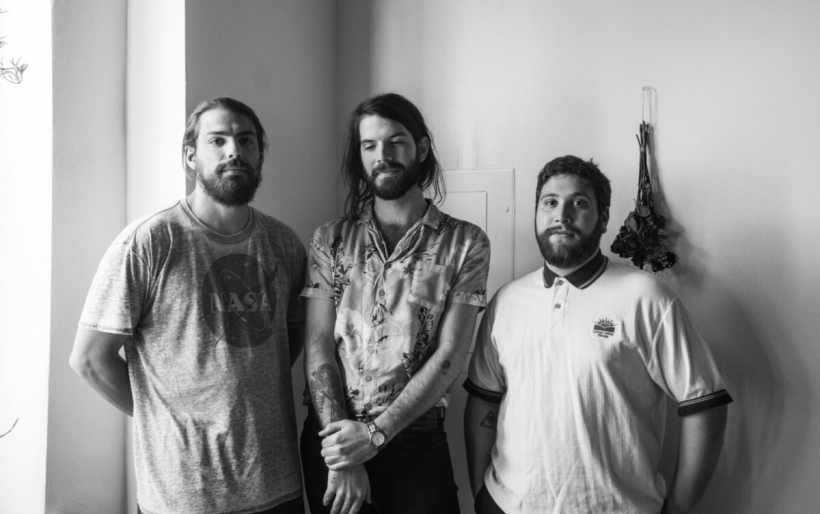 The Retinas | photo by C.J. Harvey | courtesy of the artist

Nothing about being in a band is straight-foward, not even a drive from West Virginia to Pittsburgh on a Friday afternoon. “Something didn’t want us to get to the gig tonight,” Thomas McHugh of Philly rockers The Retinas said with a sigh as we began our conversation. That something was a fender bender leaving the band with a busted radiator and a cancelled gig, a dilemma most touring artists can likely sympathize with. The Retinas, however, are no stranger to figuring things out on the fly.

The first LP since the band’s self-described rebirth, The Retinas is a scintillating trip from the Philly trio’s shredding youth to their controlled, confident present, where impressionistic, quasi-love songs like “Fix That Up” fit snuggly next to anthemic burners like “Problem With The World.” They are a band using every bit of experience they’ve gained to build an album that feels unique to those experiences.

Once their busted van was dealt with, I got a chance to talk with Thomas about the new album, the freedom of trust and much more.

The Key: You guys have been together for some time now, can you walk me through the genesis of the band?

Thomas McHugh: Well, it’s kind of an Old Testament and New Testament thing in a way. [drummer] Anthony Fulginitti and I started playing together seven or eight years ago in a different lineup with kind of a different style. That was while I was in college, and it was us figuring out what we wanted to do and how we wanted to play. Then what I consider to be the beginning of the proper Retinas happened about three and a half years ago. That was when [bassist] Andy Silverman became a permanent member and we really started to take it more seriously, trying to get higher fidelity recordings and just doing it as a full thing.

TK: Looking back to that time right out of college through the reinvention to where you are now as a band, what do you think has changed the most?

TM: I think that especially in this last year, and even more so in this last four-year stretch, we have been learning how to be a band in a way. There are all these weird details I don’t think we realized before, as to what we needed or how we wanted to go about doing things. For example, in the old days we used to do all our own demos in our own rehearsal space, then we started to work with other people, but we felt pressured by money and time until it felt like the recordings were suffering. Specifically with this record, we were able to find a really good balance. I went to school for recording, so we recorded it ourselves then brought in people at the end of the process, after we got everything the way we wanted it, to kind of take it to that next level.  There are just different things like that where we’ve learned how to approach things knowing how we want to do it and knowing the most efficient way to do it and not being so much in the dark.

TK: You’ve discussed the more business side of things changing a bit as the band has grown, do you think there have been similar changes in The Retinas’ sound?

TM: I don’t think the sound has changed drastically. I think we are always going to be a punk band in a way but I think we’ve steered away from being just a punk band. We all kind of line up where we want to be a lot like The Replacements. They could write a country song or a thrash-punk song or a pop song. I think our sound has changed in that we are doing whatever we want as opposed to just playing it really, really fast.

TK: I have to say, I did notice that change a bit. Some of my favorite songs on the record are the more downbeat tracks like “Fix That Up”, “Big Fish”, “Visual Snow”, did you find yourselves writing more songs with that vibe this time around?

TM: I definitely think that we have been. On the earlier EP’s some of our favorite songs to play live were “Checked Out” or “Wretched Time,” those more ballady songs, and I think a lot of the record was us exploring the different directions we could take that. We don’t want to do it too much because we want to keep it a party during the set and have fun and get people moving around a bunch but we also like that more emotional side.

TK: But at the same time, you have “Vote For Pedro”, which is just a true rock and roll, dive bar jam, can you tell me a little bit about that one?

TM: I think that is one of our favorite songs to play live. It’s definitely a little tongue in cheek. It started out as a protest song, kind of an anti-Trump song, but as we recorded it and played with it more, a lot of it was just kind of poking fun at what we see on the internet or whatever. It’s a song just trying not to take itself too seriously. Every time it feels like it is going to get serious, it says something contradicting that seriousness.

TK: You’ve talked about continuing things from the past, but what’s something you did that feels completely new?

TM: I think that the arrangements are pretty new. One of my favorite arrangements on the record is “Afterthought.” We have all been in different bands and played with different people and being in a band is definitely like being in a relationship, sometimes you might limit each other but sometimes you allow each other to be freer and do what you want and I think us, as a unit have more freedom to experiment. For instance, the first demo we did was acoustic guitar and strings then we scrapped that and did more piano with a kind of hip-hop beat, so with the arrangements in general we were all able to push things in different directions and find new ground to cover. I think we are all just a lot more confident. It feels good, it feels solidified.

TK: You mentioned earlier recording the album yourselves before bringing in help at the end of the process, was that how Keith Abrams got involved?

TM: Keith Abrams, who just did The Districts new record, did the final mix for us. He is really great to work with. I feel like we really got a lot of good stuff out of the mixing process with him and that’s where the record really started to come alive and find a lot of clarity. It really became a collaborative process, recording it ourselves and really taking all the time we needed and then bringing it to him with a vision pretty much there and having him direct us. You can get so close to a project that you have blind spots to it so he could really take a new look at everything.

The Retinas will celebrate their new album on Friday, November 15th at Bourbon and Branch. Tickets and more information can be found at the XPN Concert Calendar.