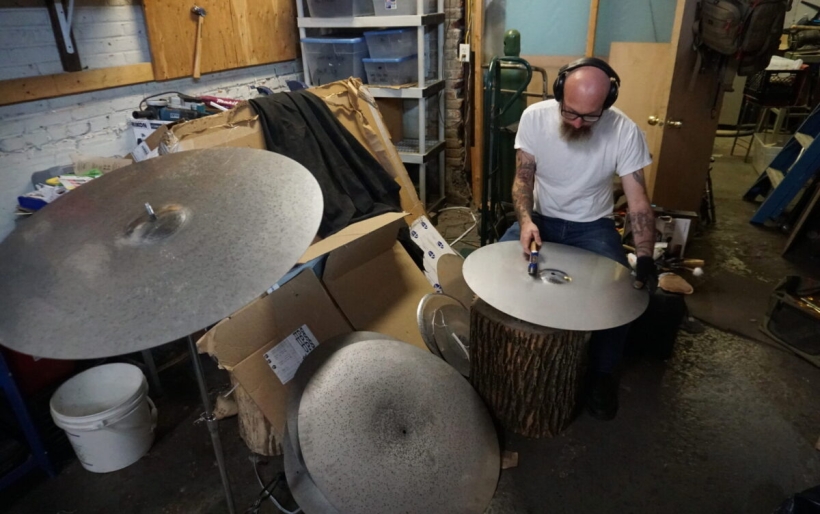 Before starting to bang a piece of stainless steel into a cymbal with a hammer, Michael Mongiello offered up a pair of foam earplugs. “This will probably be louder than when it actually gets played,” he said with a slight smile.

Welcome to the exciting world of DIY cymbal-making in Philadelphia, population one. No, that is not a misprint or some sort of exaggeration: there is exactly one person making professional-grade cymbals in the Philadelphia area and it’s Mongiello. Operating out of a South Philly garage that’s home to a few other work spaces, Mongiello Cymbals has only been a real thing for a few months, though he told The Key that it’s been a long time in the making.

“I sort of went down the wormhole few years ago of learning about custom cymbals,” he explained. “I wanted some, I wanted people to make them for me. And through that I started learning about people like Roberto Spizzichino, Matt Bettis, Nicky Moon, Dave Collingwood.” After a deep dive into cymbal-smiths and the different methods they use he thought, “You know, maybe I can give this a try and I did a lot of research and started making tools and went for it.”

Making a cymbal is not necessarily a time-intensive process – Mongiello told The Key it takes him between one and a half and six hours for each one, depending on the size and style – but that’s only because he’s gone through a lot of trial and error to reach this point. Working in stainless steel, which is not the most traditional material for cymbals, is a different process than if he were creating them out of the more normal bronze or another alloy of some kind.

Historically speaking – and this is going back centuries, since these fabricators are some of the oldest companies in the world still operating – many cymbals came from Turkey. While today there are manufacturers around the globe, bell bronze, the material used for high-end cymbals, still mainly originates in that area.

Not only is Mongiello new to making cymbals, he’s also not an experienced metalworker. “I had to teach myself how to do all this,” he said. Partially because of that he decided to create his cymbals out of a material that is less labor-intensive, though he is planning on learning how to lathe in order to start making bronze cymbals.

Still, you wouldn’t know Mongiello has only been doing this for a short period from looking or listening to the finished product. Mongiello’s cymbals sound loud and crisp. And while steel being thinner than bronze does not hold up to heavy, heavy drumming like in a punk band, he told The Key that it’s good for any other style of music.

Steel cymbals are a “niche within a niche” according to Mongiello, which has made marketing the finished product a bit difficult. “[Drummers] put their nose up a bit because it’s not bronze,” he explained. But at the same time, he’s not attempting to recreate a bronze cymbal. “I’m trying to make a cymbal that sounds good in the medium that I’m working in,” he said. “I think I’ve I’ve come across some methods where my cymbals and gongs sound good to me and I’m very picky. So I know there’s someone out there that will like this sort of thing.”

So far, his South Philly-made cymbals have ended up with drummers around the city and as far away as Hawaii and Alaska. While he’s not quitting his day job – he’s been in the service industry his whole working life and is currently the manager at Bing Bing Dim Sum on Passyunk – he’d like to eventually make cymbals his full-time career.

Before hammering his first cymbal, Mongiello had to fabricate an anvil, which he carved out of a piece of steel, and also modify a bunch of ball-peen hammers, which are his main tools. Since there’s no “Cymbal Making For Dummies” Book or even a plethora of YouTube videos – despite the literal millions of drummers in the world, this really is as obscure as it sounds – he reached out to the small community of DIY handmade cymbal makers for advice.

To hear Mongiello describe it, it doesn’t seem like there are more than a handful of people doing this around the world. “There’s one guy in New Jersey who does it, his name is Nicky Moon and he’s fantastic. There’s a couple guys in England. One in Chicago. There’s a Japanese guy and a couple Korean guys,” he told The Key. He mentioned Heather Stine, who is in California, and Matt Bettis who lives “in a remote part of Idaho [and] hammers cymbals near rapids. That’s pretty cool.” He’s not exaggerating: Bettis really does do that. Why? Because he can. Clearly cymbal making is serious business.

Mongiello told The Key that this community, while certainly welcoming, is generally “super secretive” and “a lot of times advice will be very cryptic.”

“It’s sort of like they’ll give you trials,” he explained. If you pass the test, maybe you’ll get a little bit more information, another tip or trick from the experts. From everything Mongiello has accomplished over the past few months it seems like he’s beating those quests left and right. The lack of information about how to do it makes cymbal making a bit of a “black art” he joked.

While by his own admission, “I’m certainly not going to be a professional musician,” Mongiello is an an accomplished drummer who has been playing in bands for almost two decades including time spent in Bunnydrums and as part of Mikey Wild’s backing band. He’s currently drumming for a new doom metal band tentatively named Hood of the Monk where, yes, he’s using his own cymbals. Part of what fueled this whole endeavor to become a cymbal-smith was wanting to give back to this community he’s been part of for so long.

“I love cymbals, and so just playing around with the idea of making them was cool to me,” he told The Key. He spoke about the physical connection he’s had with the process, starting from having to actually make his own tools before he was able to hammer the first cymbal. More so than any other musical instruments all percussion is by nature kinetic. The power you put into playing is reflected in the intensity of the sound. That is something Mongiello said is also true when it comes to fabrication: “[It’s] like you’re transferring your energy into the metal and feeling it come out of it.”

While he was determined to get it right, it took Mongiello a lot of time and effort until the “first time I made a cymbal that actually looked like a cymbal,” as he put it. Remember, not only did he have to research a topic that is basically word-of-mouth between what is literally a handful of people but he also had to make his own tools before he could even consider figuring out how to hammer a piece of metal into a working musical instrument.

In today’s convenience-driven world it would seem almost anathema to put this much into making something that would be a million times easier to just buy. It might be challenging but for Mongiello, “That’s what makes it satisfying.”

Find out more about Mongiello Cymbals on their instagram: @mongiellocymbals