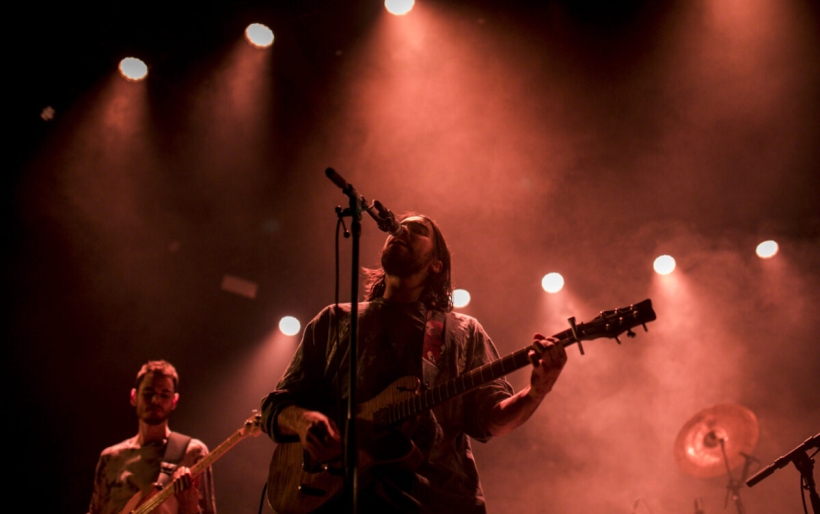 If you could take any snippet of (Sandy) Alex G’s show at Union Transfer this past Saturday and hold it against another, it’d be hard to tell it’s the same set without prior knowledge of the confounding artist that is Alex Giannascoli. A staple of Philly DIY who has been reaching a wider and wider audience since features on Frank Ocean’s album Blonde and the success of his 2017 album Rocket, Alex G puts on the kind of show that’s equal parts machismo and irony. It’s the rare type of paradoxical show with the sense of “he’s there, but it’s not really him;” a sincere lie.

Philly band Corey Flood opened for the night, the dark rock trio performing songs off their 2018 EP, Wish You Hadn’t, along with some unreleased tracks and songs from their recent The Key Studio Session, like “Honey” and “Heaven Or.” Their sound has expanded since their initial release, incorporating some brighter tones into Em Boltz’ guitar and Ivy Gray-Klein more expressive in her vocals, a great adjustment to account for a venue like Union Transfer.

Louisville singer-songwriter Tomberlin (full name Sarah Beth Tomberlin) performed next, distinctly quieter than the bookending acts, but nevertheless a welcome addition to the night, the “miso soup before the spicy meal,” as she described it herself. Playing songs from her 2018 album At Weddings, as well as some as-of-yet unreleased tracks, she performed both solo on acoustic guitar and accompanied by (Sandy) Alex G’s guitarist Sam Acchione. She has a stage presence similar to that of Phoebe Bridgers, her music incredibly personal and touching, but her stage banter considerably more sardonic (“I’m gonna play some sad bangers for y’all.” she quipped when setting up). Unexpected, however, was how encompassing her voice was in the moment, warm and deceptively inviting when hearing the lyrics of fraught relationships and personal battles.

Alex G entered late into the night to the sound of “Project 2,” an instrumental track from his latest album, House of Sugar, so named for the Fishtown casino SugarHouse. From there, he launched into the singles from the album, “Gretel” and “Southern Sky,” the latter a dystopic take on the folk ballad, performed with a growl in Giannascoli’s voice that is left out of the jaunty album version. Completing the trio of the album’s singles with “Hope,” they made sure to get in some fan favorites with “Bobby,” and “Kute,” the two of which could not be more tonally separate, going from indie-rock square dance to aggro grunge sung through gritted teeth.

The night continued through Alex G’s vast discography in this same pattern for the most part, a mixture of new tracks and older hits for the fans, but very few deep cuts. A trademark of Alex G’s sets is audience members screaming requests, then Giannascoli abruptly cutting them off with intense shouting, often met with laughter. During the encore, he revealed that even when they did announce that they were taking “requests,” they continued to play whatever they felt like, not hard to believe considering that they never get into his Bandcamp-only early releases. Regardless, the live adaptations of his House of Sugar tracks were captivating enough, departing from the highly chopped and screwed versions on the record to more straightforward and digestible listens. For instance, songs like “Taking” and “Near,” are distorted into hysteria on the album, but in a live setting strip away the many overlapping echoes of Giannascoli’s voice and instead necessitate a more fleshed-out structure.

Giannascoli was, of course, not alone on stage, accompanied by his longtime bandmates Sam Achionne on guitar and piano, John Wesley Heywood on bass, and recent addition Tom Kellyon drums. Tomberlin joining the band onstage for some songs as well, including “Powerful Man” and “Bad Man,” both benefiting from her harmonies. Just as in previous Philly concerts, Michelle Zauner of Japanese Breakfast also joined the band for “Brite Boy” during the encore, her and Tomberlin handling the higher-register parts.

“Corny” has clearly been a word on Giannascoli’s mind, in interviews using it to describe the Springsteen-esque anthem “SugarHouse” and the faux-redneck drawl of “Bad Man,” stating that, “if it’s corny, just lean into it, make it more corny.” His performance is drenched in that corniness, whether it’s his hokey dancing in the intro to “Horse” and his goose-stepping throughout the show, or his intense sincerity when playing songs like “Fell” (one of the few deep cuts on the setlist, played on piano) or his overly-enraged performance of “Brick,” where he screams into the mic then stomps around on stage and jabs his drummer with his finger while yelling into his ear.

But that corniness is what keeps him at a distance during his performances and holds the audience at arms length. This isn’t a bad thing, in fact it becomes a part of the show, the irony of it all reflected in the audiences fervor when a classic is played, or elicits calls for requests when it’s well known they won’t get played. It’s the difference between Alex Giannascoli and (Sandy) Alex G. Before closing out their main set, Acchione took the mic to thank the openers and the crew, and capped it off by thanking the audience, adding, “We’ll see you all at the SugarHouse after this,” very sincerely.