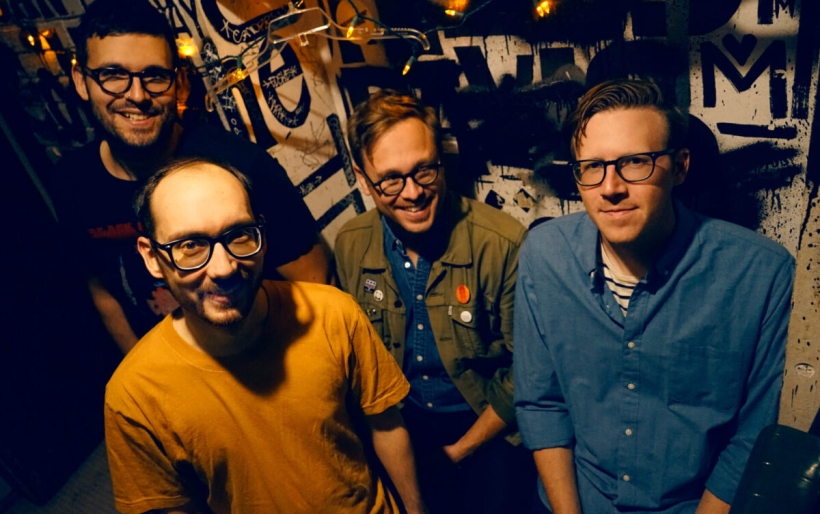 By Surprise | photo by Brian Meitz

The story of South Jersey indie rock four-piece By Surprise is the story of friendship.

The four bandmates — singer-guitarists Pat Gartland and Rob Wilcox, singer-bassist Dan Saraceni, drummer Devin Carr — grew up in Haddon Heights, South Jersey, and began making music together 13 years ago, when they were in their late teens and early 20s. They self-released a couple EPs (including 2008’s 478, ie. four songs on a 7″ in eight minutes) and put out a solid LP called Mountain Smashers on Topshelf Records in 2011.

Since then, they’ve worked and released music at a schedule geared much more towards themselves and the health of their personal relationships than towards the demands of the music industry. Folks moved around the country; folks got grownup jobs. They do the band thing when they can.

“Pat once described [By Surprise] as a ‘bowling league,’ and I think really is a good description of what it’s like,” Saraceni says in a press release. “We basically just get together when time allows and we just try to have fun and make it work at our own pace. We’ve all maintained this friendship/bond throughout.”

By Surprise reconvenes on its hometown at least once per annum to participate in the Arbor Christmas Pageant and record music for its companion compilation. This year, the band has a bit more than a holiday jingle up their sleeve — it has its long-in-the-works second LP.

Cosmic Latte comes out on Chicago-area independent label Jetsam-Flotsam this Friday, December 6th, and is the band’s first release since the terrific 2013 EP Criteria. The record finds By Surprise exploring themes of maturing beyond their turbulent twenties, but also discovering the whole new batch of anxieties that come with it. Sonically, it’s still distinctively these four friends jamming out, but in more of a crunchy power pop way than a twinkle emo way; think of it as the band leaning away from their Cap’n Jazz influence that’d previously been the face of the organization, and more into the Guided By Voices influence that was always at their core.

You can hear that in “Pretend,” the punchy, two-minutes-and-change single By Surprise dropped today. It uses chugging guitar chords and quirky high-end sonics to score ruminations on a personal rut. As Saraceni tells us, “The song is about feeling stuck in a bad situation and wishing you could move on from it,” and you hear that in lyrics about wanting to shut out the world: “I can’t forget the way you said what you said / I hear you calling out my name but I’m not listening to you.” It’s exasperated, but oddly infectious.

Listen below, and get more information on Cosmic Latteat Jetsam-Flotsam’s website.