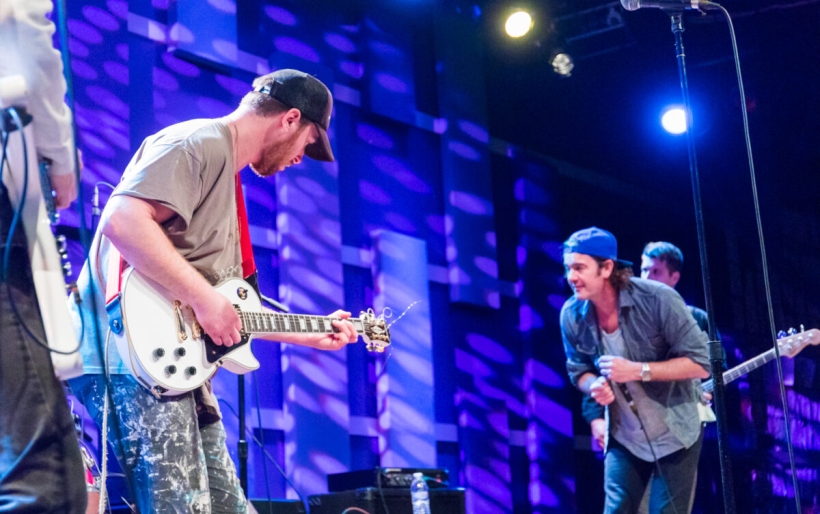 The Warhawks | photo by Jamie Stow for WXPN

Free At Noon Flashback: The Warhawks celebrate London Calling with G. Love on the assist

December 14th is the 40th anniversary of London Calling, the ambitious third album from punk rock heroes The Clash. It’s a double album that stretched their sound from the bare-knuckled punk of their early years into raucous rockabilly, swinging ska, and impeccably hooky pop. It showed the group’s the broad range, and opened up the possibilities that lie within punk, once the genre’s practitioners breaks down its puritanical boundaries.

The album’s influence could be felt far and wide, among the band’s peers as well as subsequent generations, and we saw that in action during today’s Free at Noon concert.

New Jersey rockers The Warhawks took the stage to cover Side A of London Calling, marching out with a true-to-form take on the title track. The plowed right into “Brand New Cadillac,” showcasing guest lead guitarist Zach Tyler of The Dead Flowers straddling the kick drum and leaping into the front row. This was clearly an album these 20-somethings had spent a lot of their life absorbing, and it was clearly a thrill for them to bring it to life in front of a packed house

Philly’s G. Love was waiting in the wings, having just played a Free at Noon set of his own. He’s an artist from the generation in between The Clash’s own late boomer era, and The Warhawks’ early millennial era, and as he fervently blew his harmonica to “Jimmy Jazz,” swapping solos with Hawks leader Matt Orlando, and vamping to a three-piece horn section in the back, you can tell that the music was as much a part of his DNA as everyone else’s on stage.

After the brash brawl of “Hateful,” the horns returned for a giant singalong dancealong to “Rudy Can’t Fail,” an uplifting number that whetted the room’s appetite for The Key’s full-album tribute to London Calling, which takes place tomorrow night, December 14th, at World Cafe Live. Tickets and more information can be found at the XPN Concert Calendar; watch video of “Jimmy Jazz,” listen to the entire set, and see a gallery of photos from today’s Free at Noon below.