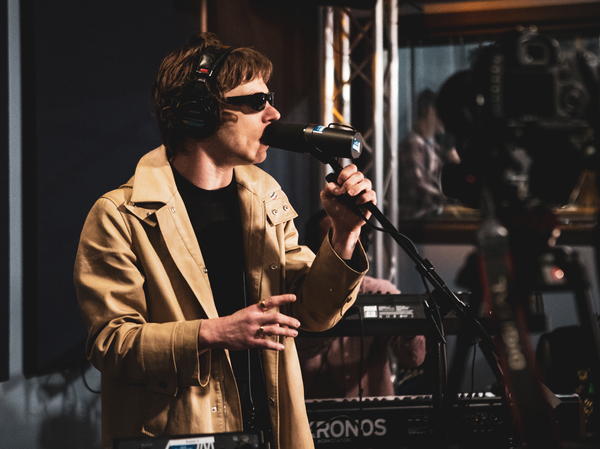 Year-End Mania is the Key’s annual survey of the things below the surface that made 2019 incredible. Today, World Cafe videographers John Groome and Galea McGregor share their top performances of the year.

Between Free at Noon concerts, World Cafe sessions, NonCOMM, and the XPoNential Music Festival, Galea McGregor and John Groome capture hundreds of performances every year at XPN, and turn them into stunning clips for our video channels on NPR Music Live Sessions and YouTube. Here are their picks for the eight most exceptional videos they worked on this year.

Julia Jacklin “Don’t Know How To Keep Loving You”

Galea McGregor: We were impressed with how humble and grounded and the down-to-earth friendly vibe she had coming into the studio. When the band played, everything elevated to another magical level. We were both looking at each other, freaking out…like “woah what happened?”

John Groome: One thing that struck us about the session was the drummer, Ian Daniel Kehoe, and his soulful way of playing, the intentionality of his movements. It really pulls you in. And Julia’s voice is so lovely, and I really like the lyrics of that song, because they’re the inverse of what you’d expect a song like that to say.

GM: His voice was incredibly striking. People had said he was the new Jeff Buckely and though I was resistant to the comparison, being in the room with him, I saw what they meant. But he had a whole other thing going on, with his vocal range and how he used it, and it’s beautiful in and of itself. When he busted out with those vocal runs, it felt like we were in a cathedral. It was lovely.

JG: I remember he was very quiet, he very much turned inward leaning up to the performance. The session where it’s just one person performing solo, those are always an interesting vibe. Normally bands come in, they have their group of people. You get to know the artist differently when they’re by themselves, you get to see their personality differently in that they’re around strangers, the way you’re around strangers. It’s a more vulnerable thing for them to be alone, but he absolutely carried it well, once he started warming up.

GM: You’ll notice Chaz does a facepalm at the beginning of the video. They had a few false starts for this song, which is why he got up on the stool, to flip it. But then, okay, it was the only time I ever had anybody sing while standing on the stool.

JG: Those are stools I assembled by hand.

GM: He was very playful

JG: But not until then. He was very serious until then. Musically, it was cool that it was kind of electronic-y, but the bassline was funky and grooved with the song, it had a live energy to it that made it stand out.

GM: Organic, electronic, and had a bit more volatile side to it…very exciting. And now this song is everywhere, like Whole Foods.

GM: He had an otherworldly vibe, he was so impeccably dressed, and carried himself in this incredible manner, so sweet but would look you straight in the eye. Also, we both had to be barefoot while shooting, because the microphone picked up everything.

JG: Chris said he could hear our footsteps, the microphone was sensitive and picked up everything, so we both popped off our shoes, and that set an really intimate atmosphere. His voice is incredible compelling and his range, when he flips into falsetto at the end of the song, is really breathataking. We were definitely looking at each other between songs, like “wow that was amazing, hope you got that.”

GM: It was really cool to be in the room for such a theatrical band who is really renowned for their over-the-top live shows, and amazing to see that stripped down in to the performance studio. You could tell everybody was dialing everything back, which gave another kind of intensity to the performance, it wasn’t flamboyant and outward, but still sharp and on point.

JG: It was really interesting to see a show that’s normally so large, that you see from so far away, to have it be person-to-person, have it right in your face like that. It brings it down to scale, you could appreciate the nuance of a performance that grandeur.

GM: You appreciate their musicianship on a micro level

JM: At the end, she becomes emotional as the song rings out, and normally at the end of the performance, we’ll go out of focus and ease the camera way from the performer, to wall so we could fade to black. In this case I could tell it was a moment and I didn’t want to miss it. But there was also a voyeuristic sense of “am I intruding on her private moment?” So trying to find a balance. Plus it was powerful and affecting to see her be so struck by the message of the song. She said after that she gets emotional like that after every time she performs the song, it really gets to her.

GM: I am not a religious person but I found this song affecting. I know she’s had a rough life, and it was hard not to be affected by the story she was telling of her faith, through this performance.

JG: So fun, one of the most fun sessions we’ve had where the whole band was cracking jokes, laughing a lot, goofing around, but when it came time to lay it down, they nailed it.

GM: The energy was really high, everybody was crowding in the control room. People on staff who usually skip sessions were down there excited to see them, and there was a real buzz in the air.

GM: The clarity of her songwriting and her voice and her lyrcs was just very moving and breathtaking.

JG: Her performance had a very simple direct beauty to it. As opposed to a session where you have ten people in a room, and it’s mayhem, it was one person doing something incredibly well, and it was very powerful.

GM: I was crying when I edited it. It’s just rare that you see someone that alone and clear between her voice and guitar playing and lyrics, and  it was completely affecting.