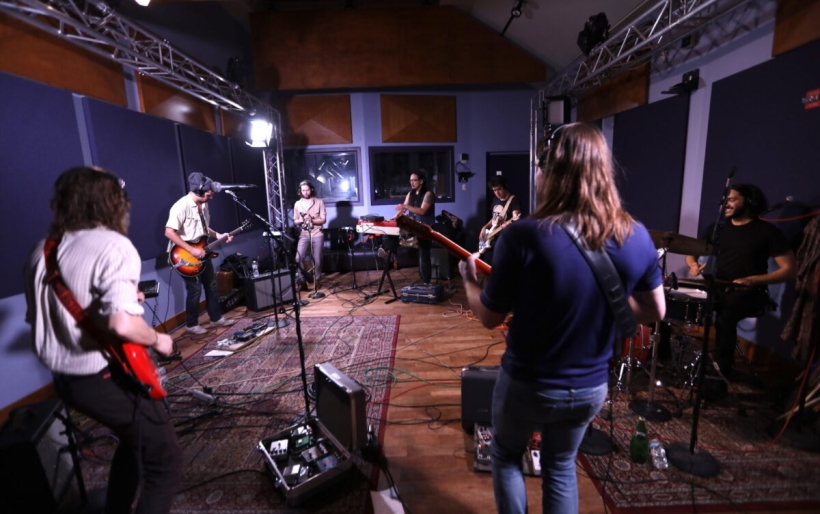 Year-End Mania is the Key’s annual survey of the things below the surface that made 2019 incredible. In this installment, we bring you the ten most popular Key Studio Sessions of the year.

In a way, constantly learning and playing music keeps Goldsworthy grounded, whether it’s rehearsing a 20-song setlist for Bayside, diving even deeper into [Dave] Hause’s catalog, or perfecting her own songs. And that she does; as a listener, you can tell that a lot of thought and care went into crafting a lift and rise to the melodies for maximum emotional effect, or a circular nature to the lyrics that brings the listener along on a journey.

In a way, doing this week’s feature as two separate sessions wasn’t an option for us. As much as they are stylistically distinct, South Philly DIY faves Secret Nudist Friends and Blushed are very much inseparable, even when they’re each off doing their own thing.

Masie Blu’s music circles around themes of love, creativity, and personal transcendence, and with the release of last year’s uplifting Transform EP, she brought her skills as a producer and songwriter to new heights, delivering soaring, Erykah Badu-esque melodies to imaginative tapestries of bright horns and buoyant beats. The set she played for The Key Studio Sessions touches on all of that, with the aid of two backing musicians: Antonio Robinson on electric upright bass, and Nathaniel Savoth on electric guitar.

All that pent-up anger, frustration, hopelessness, and rage finds a release in Low Dose’s gutting, emotional debut record, as well as their live sets — you can see it in [this] of “Sinking,” recorded live for The Key Studio Sessions. The song is already roaring and racing, with Rosenberg and McGinnis swapping vocals about feeling trapped and isolated, suffocating in a toxic environment, when the music breaks into a free-form noise jam at the three-quarters point. The three bandmates with stringed instruments head directly to their amps, jam the necks along the speaker, and begin strumming and scraping their strings feverishly. At the drums, Smith is moving in 180-degree rotations, ambidextrously slamming different parts of the kit, goading the rest of Low Dose on until it comes to a breathless finale. Rosenberg and McGinnis are both on the floor catching their breath as the humming amps cycle down. Slowly, everybody gets up and walks away.

Thomas and co-collaborator / hype man RE-MUS founded The Funkitorium this spring, and busted out the gate with the suave Anderson .Paak stylings of their debut single “Butterfly Loco,” a slick performance of which opens their set. A well-played cover of Earth, Wind, and Fire’s “Reasons” follows, and on it we hear RE-MUS take an incredible lead vocal turn — his falsetto at the 3:30 point will make you cry. Also in the mix is a swift and energized rocker “How You Like Me Now?,” which bears no relation to the hit by The Heavy beyond its driving spirit (watch a video of that one below) and a closing mashup of The Isley Brothers’ “Climbing Up The Ladder” with the original “Rolling Stone.”

In her songs, performed live for this week’s Key Studio Session with a four-piece band, you can hear moments of inspiration from Carole King, Laura Nyro, and an undeniable undercurrent of the Dead. It’s a spirited blend of folk, soul, and rock played by expert musicians — Eric Cooper on bass, Mykk Hoffman and Ethan Cain on guitar, Josh Steingard on drums — but it has a contemporary undercurrent as well.

The tour that had Dzambo and WPO pair up was their second visit to North America, and their first on the east coast. The day after they recorded in WXPN studios, they performed under the stars and nearby a bonfire in the backyard of Germantown’s Rigby Mansion. XPN’s David Dye was in attendance, and he dubbed it “the most ecstatic party I’ve been to in decades.” You can feel some of that heat in this studio session performance, opening with a collaboration on the standard “Ibrahim,” where WPO vocalist Petia Zamfirova trades off on vocals with Dzambo’s tupan player Orfej Chakalovski while a sea of horns fanfares around them. From there, the two bands tackled an instrumental take on the Macedonian pop tune “Kes Kes” by Julia Bikova. Then we heard aan untitled cut from Dzambo, which got Zamfirova and her bandmates dancing along the perimeter of the studio.

“I mean, you’ve listened to Paramore, right?” laughs Youssef, reminiscing about reactions Sweet Pill has gotten from listeners who want to merely align it with the DIY underground. That’s an area where the band excels, for certain — many of its members, including guitarist Jayce Williams, are players in 4333 Collective, an indie promotions group that puts on sick shows at Glassboro’s Rowan University and reminds us a bit of R5 circa 2000. But there is no denying the formidable presence and charisma the band has — particularly Youssef, rocking the mic and stomping around center stage, working up a sweat and barely stopping to catch her breath — nor is there any denying the expansive possibilities of their sound to grow into something massive.

Baizley’s gravelly voice howls, but remains in control of the melody, while Gleason’s alto is a warm counterpoint; their playing styles are complimentary as well, Gleason’s agile and precise, Baizley’s rhythmic and emotive.

As his songs rolled out, Awan knew that he wanted them to sound big — like three guitars and keys big, multiple interlocking lead parts big. “I like to write the songs in layers and figure out who’s going to play those parts when it happens naturally in the room,” he says. “It’s like building a house, but letting the band decorate it.”