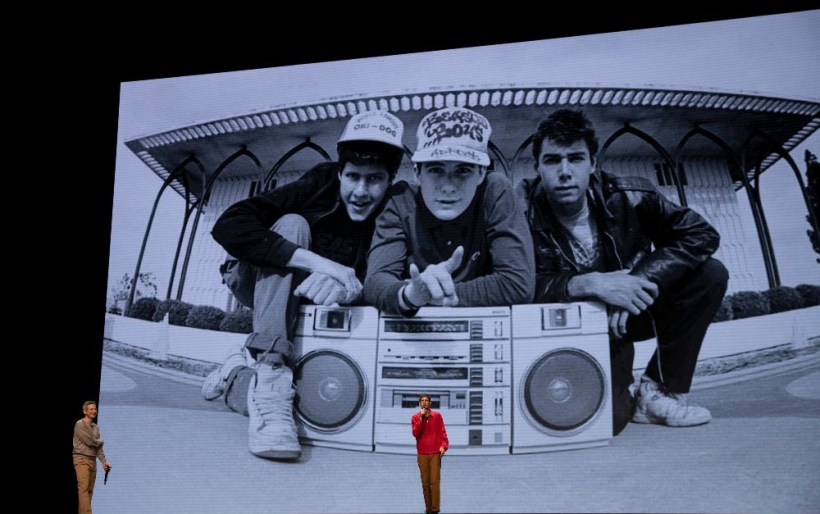 Last spring, founding Beastie Boys Mike Diamond and Adam Horovitz went on a short storytelling tour, coming to the Tower Theater in Upper Darby as well as two nights in New York, telling their story to fans while filmmaker Spike Jonze documented the proceedings. Almost a year later, the Beastie Boys Story documentary will be released in a limited theatrical run on April 3rd, followed by a streaming release on April 24th via Apple TV+.

When the show came to the Tower, The Key’s A.D. Amorosi said that Diamond and Horovitz “are both natural storytellers, at ease on stage being jovial chatty Beasties with dramatic arcs, rather than rapping Beasties.”

Their tale of rising post-platinum success on the first album, to dismal falling failure with the second record (Paul’s Boutique sold zip upon release, despite the Beasties having full control, though it garnered cult-favorite status over the years) was pragmatic, blindingly real and weirdly humorous. How they pulled themselves up with hard work and Yauch’s Buddhist / humanist awakening was tender and victorious — like Rocky without anyone having to hit meat.

With footage from two Brooklyn shows and a Philly show to cull from, Spike Jonze had his work cut out for him, but he’s possibly the ideal person to tell their story. Their stars ascended at the same time, and in overlapping ways, with Jonze directing some of the Beasties’ most iconic videos, like “Sabotage” and “Sure Shot.”

Jonze, of course, is absurdist as heck in his statement in a press release:

“I owe Beastie Boys a lot. One time, they pulled me out of a burning ship, and another time they helped me cheat on my college exam to get into Florida State. So, it was a real privilege to get to reunite with them and help them tell their story.”

Diamond and Horovitz were somewhat more sincere in their take:

“There are some friends you have lunch with so many times over the years, you know their order.  Spike is one of those friends.  And even when you don’t recognize anything on the menu, he comes up with something good for the whole table.  Like when we wondered what to do when our book comes out… then Spike placed his order: You will put on a show for the children.”

Keep an eye out for Beastie Boys Story on April 3rd and April 24, and revisit the tour trailer below.