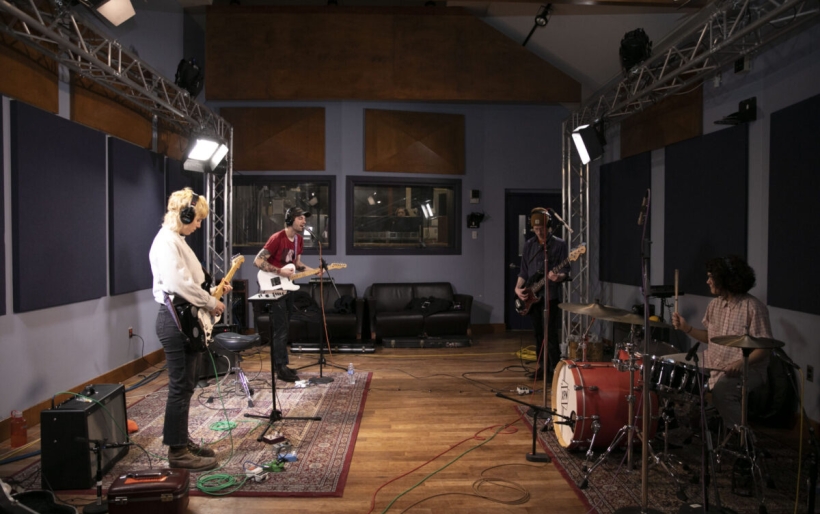 The Scranton-born, Philly-based singer-songwriter has made immersive, introspective music under that banner since 2014, releasing the lion’s share of it on his own tape label Stereophonodon and playing live with an ever-evolving cast of friends.

Though two of the musicians who joined Tomaine to play live this week in WXPN studios have been with the project for a while now — lead guitarist Mimi Gallagher of Eight and Nona, drummer Melissa Brain of Amanda X and Yankee Bluff — there was a notable absence. Spenser Spirit Hogans: bassist for innumerable area bands, and a singer-songwriter in his own right, who sadly passed away last summer at age 29.

Tomaine’s response was deeply emotional when he lost his friend and bandmate: we heard it online in the days following Spenser’s passing, we heard it from the stage at Union Transfer when Cave People opened for Cayetana’s final show. And so it’s fitting that the band’s next Philly gig is in Spenser’s name: they play this Thursday, January 23rd, at Boot & Saddle for Lame-O Records’ annual Boot & Saddle residency, which this year is raising money for charity in Hogans’ name.

For this performance, Cave People looks back while charging ahead in more ways than one. The opening “Hands” dates back to the band’s 2014 album Sinning Tree; “Wait” can be found on 2018’s Kingfisher, while “Are You Looking” is a new full band arrangement of a song that appeared acoustically on the Salt EP. We also hear a brand new song, the propulsive and cathartic “Bed,” to close the set.

Lyrically, these songs circle around themes of memory, and how the things we experience and cling to in life are saddled with impermanence (the line “something I saw as a kid in a place that won’t exist, not with middle management” in “Hands” is a beautiful conundrum). They also touch on decisions made in life, and the difficulty with (and necessity of) accepting the hand that the universe has dealt us: on the refrain of “Bed,” Tomaine reflects on an estranged relationship, singing out “I make my bed now I’ve got to lie in it / I make my bed now I ask you to lie in it.”

Where Tomaine as a singer has at various points in the past felt hushed, introspective, and maybe even a bit timid, in this performance here is bold and expressive, and his bandmates — featuring Rozwell Kid’s Sean Hallock on bass — match his energy and intensity, boding well for the band’s next musical chapter. Cave People might not have made it through its existence unscathed and without struggle, but the important thing is that it is indeed making it through, and pressing onward.

Below, watch a video of “Bed” performed live in WXPN studios via NPR Live Sessions, and listen to a Soundcloud archive of this week’s entire Key Studio Session. Cave People plays live Thursday, January 23rd at Boot & Saddle; tickets and more information can be found at the XPN Concert Calendar.