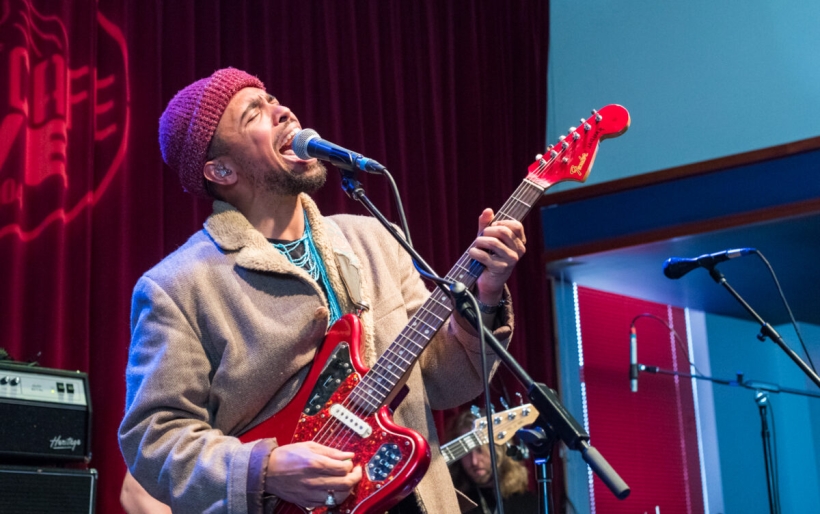 He calls Nashville home these days, but singer-songwriter Devon Gilfillian grew up in Morton, Pennsylvania, and was quite excited to return to his DelCo roots for a performance at today’s Free at Noon concert.

After building buzz over the past couple years, including stellar sets at the XPoNential Music Festival and NonCOMM, Gilfillian released his Capitol Records debut Black Hole Rainbow last Friday.

The record channels blues, soul, and gospel into fervent, dynamic rock songs; the opening “Full Disclosure” chugged along to fluttery organs and wah-wah guitar textures, punctuated by massive chords on the refrain. “Get Up and Get It” dipped right into some deep reggae vibes, with Gilfillian putting down his guitar to work the crowd with a bullhorn, and then give them space to catch their breath and reflect.

“This song is for anybody who’s going through a dark time in your life and feel like you’re alone,” he said to introduce the plaintive piano brooder “Lonely.” “Know that you’re not alone.” The song offered nuggets of advice — “when you struggle you grow stronger” and “let go of your regrets, it’s not over yet.”

“Unchained” was equally motivational, and tied into his local spirit. “I got to come to my hometown to shoot a music video for this song, starring my brother Ryan. I’m so proud of it and so proud to be from Morton, from Delco, from Philly.” Set to a cool, chiming synthesizer loop, Gilfillian sang “Wading through the water, I’m tired of looking back over my shoulder, but I’m rising up.”

The doo-wop harmonies on “The Good Life” broke down to give Gilfillian space to offer his main message of the day: unity, love, understanding, and acceptance. “Whoever you are, no matter what color you are, what race you are, what religion you practice, we’re here to love each other as brothers and sisters and human beings.”

The set wrapped with the massive, Prince-esque anthem “Even Though It Hurts,” and even though Gilfillian fell to his knees on the Lounge stage at World Cafe Live to belt the final notes, it seemed like he still had fuel left in the tank to keep going. That’s okay, though — he plays again tonight at the Fillmore Philly, opening up for his Free at Noon co-headliner Grace Potter. Tickets and more info on the show can be found at the XPN Concert Calendar.