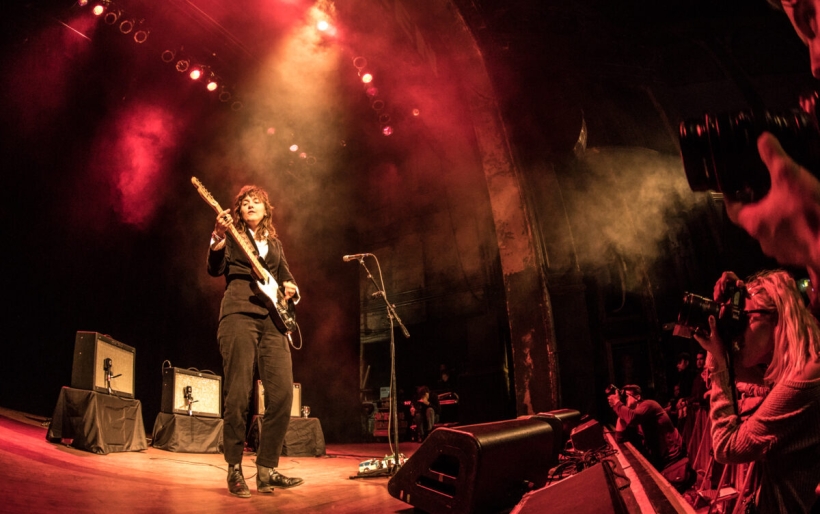 Courtney Barnett took her place at the Queen Theater in Wilmington Thursday night, on a stage sparely set with an array of three Fender amplifiers, and delivered an intimate solo set, the promise of which had sold out the show fairly quickly.

Barnett is effortlessly endearing, engaging with an easy smile and a naturally commanding stage presence. She’s managed to forge deep connections with her fans over a relatively short career, so far, trading on her witty lyrics that offer candid social observations and compelling stories.

The Aussie rocker played a number of those well-loved fan pleasers Thursday, like “Elevator Operator,” Everybody Here Hates You,” and “Sunday Roast,” the chorus of which has organically evolved into an unprompted call-and-response.

She played several obscure covers, too, like the Lemonheads’ “Being Around” and “Not Only I,” from fellow Aussie indie-pop supergroup Seeker Lover Keeper — and Hank Williams’ “I’m So Lonesome I Could Cry,” which she dedicated to the estimated one billion animals that perished in ongoing bushfires back home. She wrapped with a relatively new track, “Play It On Repeat,” released in a recent MTV Unplugged set.

Swapping several times with her guitar tech between between black and blue Telecasters (“it’s just two guitars,” she explained, “but it looks like more!”), Barnett-sans-band sounded a little like a Billy Bragg record, where the space and amp reverb play a part all their own, and seem to contribute to the music as her words and chords do.