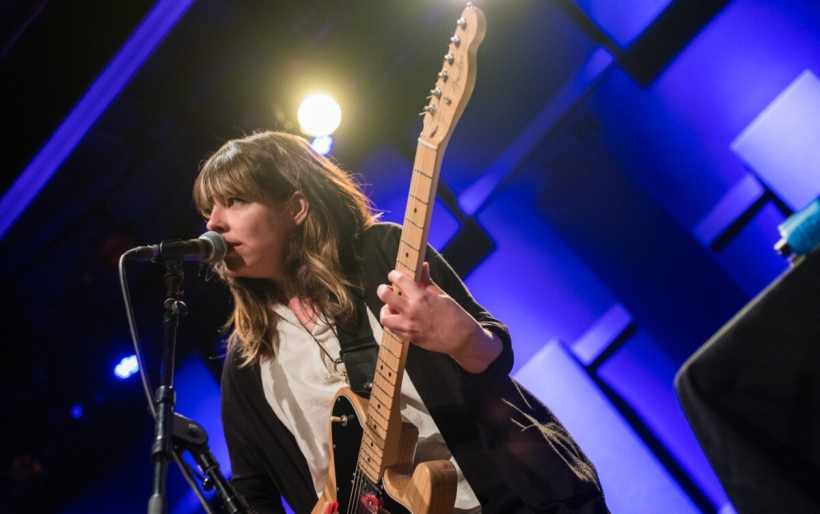 After spending over a decade focusing mostly on her band Hop Along, Philly songwriter Frances Quinlan releases her debut solo album Likewise today. Still somewhat in disbelief that the record is finally out in the world, Quinlan joined us today for Free at Noon to celebrate its release.

In addition to her usual guitar, Quinlan’s solo songs explore different sounds, incorporating synths, strings, keyboards and digital beats. The result is reminiscent of the songwriter’s work with Hop Along, but provides the space for her to work more independently as she crafts her complex melodies and narratives — like NPR’s Marissa Lorusso writes, “these songs follow shapes you can recognize, even when they lead you to places you might not expect.”

Playing alone onstage with just a guitar and backing tracks, Quinlan told folks listening at home to imagine there was a band in the background. She started off the set with Likewise opener “Piltdown Man,” and followed it with the Hop Along song “Some Grace,” noting that the band’s members each contributed to and supported her new album.

Quinlan showcased several more Likewise tracks, shouting out her niece, who’s the inspiration behind “Rare Thing,” in the audience while introducing the song. Still getting used to her new computer-assisted setup, Quinlan marveled at how anything could go wrong when you’re playing live on air, and everyone would experience it. “That’s just so real, isn’t it?” she wondered while running into technical difficulties on “Now That I’m Back.” Quinlan moved past it, though, played another Hop Along song — the dream-like “How You Got Your Limp” from 2018’s Bark Your Head Off, Dog — and closed out the set with a scorching performance of “Went to LA.”

Likewise is out now. Revisit photos and audio from today’s set below.