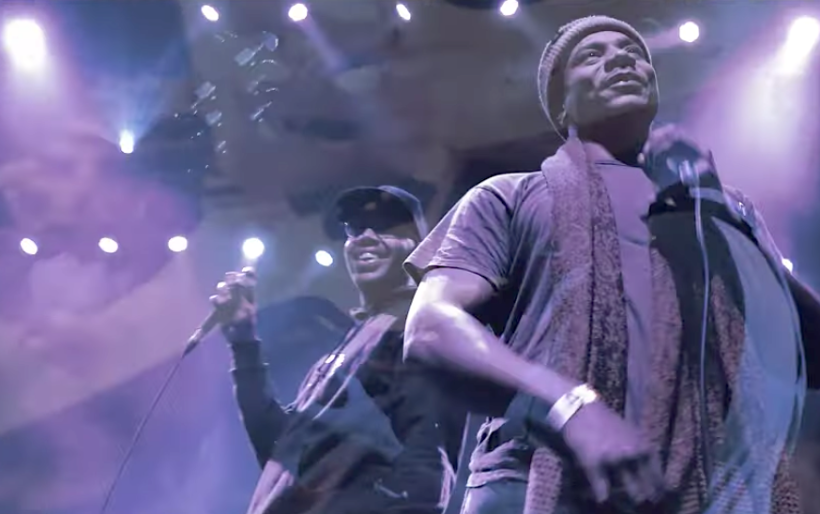 STS and Khari Mateen with RJD2 | still from video

Longtime Philadelphian RJD2 will release his seventh studio LP, The Fun Ones, this April, and as he’s done for the latter half of his career, the composer and beatmaker has teamed up with a spectrum of vocalists from the hip-hop and pop world to add some singing and spitting to his sounds.

According to Rolling Stone, the new record will feature cuts from underground rap faves Homeboy Sandman and Aceyalone, along with sampled snippets of conversations with Phonte Coleman of Little Brother, J-Zone, Kid Koala, Mr. Lif, and Son Little. And on the new single, RJ brings in a few folks he connected with while living in Philly: singers Jordan Brown and Khari Mateen, as well as sharp-tongued rapper STS.

The song, “Pull Up On Love,” rocks an incredibly funky and fun dancefloor groove, with each microphone-wielding person giving an appropriate amount of time to shine throughout the three-and-a-half minute runtime. With each contributor scattered to different corners of the country — RJ in Ohio, Khari in California, Slim in Georgia — the song was mostly composed remotely, with session files swapped back and forth until the process was complete. As RJ told Rolling Stone:

“This tune started with some Zigaboo-inspired drums, a nice little sweeping guitar lick, and a bass line that left plenty of space for wherever Slim (a.k.a STS) was gonna take the track. I purposely left some room to fill out the track once the vocals were in place. So when Slim sent it back to me, and Khari had done his thing on it, it had such a great vibe to it that I didn’t want to drench the track in production tricks and overdubs. I wanted the vocal performances to shine, so I basically cleaned up the mix, did a few breakdowns, and left it as is.”

The Fun Ones is out April 17th via RJ’s Electrical Connections. Watch the “Pull Up On Love” video below, and take a listen to the recent “No Helmet Up Indianola” / “One of a Kind” 7″ from RJD2, featuring Boy Sand — two songs which may or may not wind up on the album.