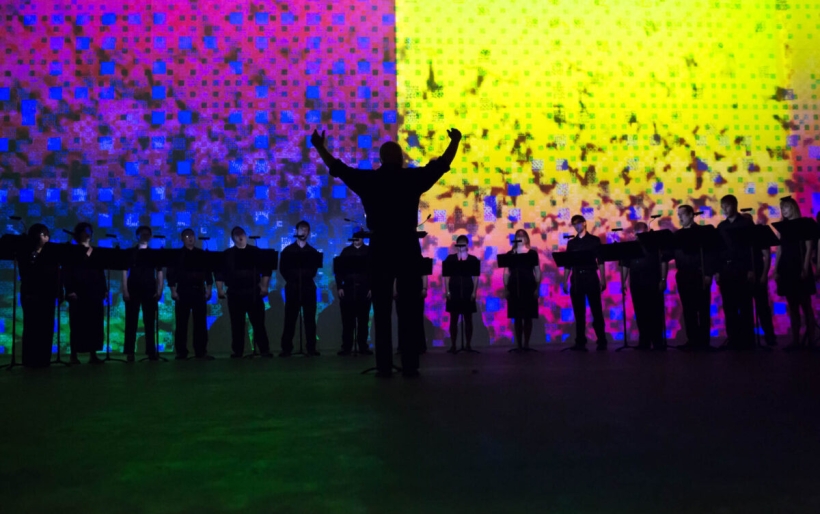 The Crossing | photo by Becky Oehlers | courtesy of the artist

Before the banners appeared on Walnut Street in University City for #Glassfest, America’s most renowned and maximal minimalist composer, Philip Glass, had a relationship with Philadelphia.

“When I came to the Annenberg about three years ago, one of the first things I came to find out was how deep of a history Glass had with our Center,” said Christopher A. Gruits, the Executive and Artistic Director of the Annenberg Center for the Performing Arts at the University of Pennsylvania, which hosts #Glassfest beginning tonight.

As a one-time director at New York City’s Carnegie Hall, Gruits had many occasions in which to interact with the composer and fall in love with Glass’s music, and the works of his ensemble: symphonies, operas, concertos and solo performances all existing between spacious Buddhist meditational chants vibrantly aggressive and repetitively rhythmic tone.

Along with reminding Gruits of previous dates performed at Annenberg or presented by Annenberg (February 14, 1982, February 27/28, 1993, April 29, 1996 in celebration of Annenberg’s 25th Anniversary as well as dates in 1999 and 2003), the director even mentioned how the earliest of Glass dates in Philadelphia – 1974’s performance at the Institute of Contemporary Art – touched on elements of “Music in 12 Parts,” a passionate piece that Glass’ ensemble will perform during #Glassfest.

“A lot of Annenberg’s programming strategy is to focus on artists you can’t otherwise see or hear in Philadelphia as well as those artists with whom we have that long history,” said Gruits of Glass. “We wanted to celebrate him coming down from New York and performing here – the history of his performances at Annenberg.”

“We wanted to touch on iconic pieces that audiences have not had the opportunity to experience, as well as new experiences,” said Gruits.

The initial catalyst for #Glassfest, in Gruits’ opinion, came from a conversation with multimedia Philly theater performance artist Nikki Appino, an artist working with Glass on the biographical performance The White Lama, The Improbable Legacy of Theos Bernard, which touches on lyrical elements of the famed yogi’s spirituality. “A great opportunity presented itself in that we could support their project (The White Lama is an Annenberg co-commission), but also gave us an entrée to resenting other Glass works, and presenting them in context,” said Gruits.

Along with presenting the aforementioned marathon Music in 12 Parts from 1974 in its entirety — a five-hour work with two intermissions and a dinner break performed by the Philip Glass Ensemble — there is The Knee Plays which features portions of Glass’ 1976 opera Einstein on the Beach mashed-up with 1985’s “knee plays” that David Byrne wrote for stage giant Robert Wilson’s grand theater piece CIVIL warS.”

Connecting the dots with the famed dream-like choral counting elements of Einstein is Philadelphia’s own Grammy-winning chamber choir The Crossing who conceived the new piece with its Director Donald Nally. “I wanted to present landmarks,” stated Gruits. “I grew up with Philip,” said The Crossing’s guard, Donald Nally, of Glass with the same brio a Nirvana fan would at having recalled their first Philly gig at J.C. Dobbs. “He’s a thing for me, a BIG thing.” Nally and I go down the list of Glass events we witnessed in New York City such as Hydrogen Jukebox, and giggle like kids. “Doing all this, I feel as if I’m touching my 20s childhood in a way,” said Nally.

Nally reminds me that The Crossing hasn’t ever sung Philip Glass before as the composer hasn’t written much choral music. “This show is a reach into that iconography, as composer such as Glass laid the path for the music we make with the  likes of David Lang and Billy Walsh. Glass was one of the composers that THEY were staring at.”

The #Glassfest opening Knee Plays didn’t really have much in the way of traditional singing when in Byrne’s hands – it was, pretty much, just the one-time Talking Head’s usual way with asking questions. To expand those questions, and perhaps make some answers, Nally had to get Byrne’s permission. “Which he did, graciously, as soon as I asked him,” said Nally with a laugh. “He was very generous, great, he was like do whatever you want. It was just getting a hold of him, because he’s so busy, that took a while. Plus, the halls of publishing move rather slowly.” (And for the record, as this is Nally’s mash-up of several Knee Plays, Byrne’s own texts are still in place and will be performed by actor and Pig Iron Theatre co-founder Dito van Reigersberg.)

What was easy for The Crossing in regard to the Knee Plays was crafting the compelling narrative, “a long riff on where we lie in the universe, looking at Einstein’s work next to the hyper-objectivity of Byrne, and the romantic texts that Glass chose to be spoken over his music of the Knee Plays” – a real mash up,” said Nally. He laughs when considering what audiences will see and hear – something where the vocalists of The Crossing will also play instruments.
“It’s not just The Crossing singing that people are used to seeing – it is The Crossing PLAYING,” said Nally. “We’re making a band out of it. The arrangements are very energetic, and it is us doing crazy, out-of-the-box stuff and stretching ourselves. We already do miraculous work. With ‘Knee Plays,” we’re going just one more step.”

Of #Glassfest and the opportunity of having the ears of Glass to bend, Appino stated that working with a master such as Philip on a tale of the first westerner to study at the monasteries of Tibet (never to be seen nor heard from again) has influenced the Philadelphia multi-disciplinarian’s process in a way that past projects haven’t. “I work in collaboration with a small core group in a set of intensive workshops spread out over a two-year span of time,” stated Appino. “This length of time is a key factor in allowing all of us to make deep explorations of the content, and generate materials that build upon one another. When the caliber of artists is at this level, what happens when we are in the room is faster and deeper and that has surprised me. When you get to a certain age I think surprises are rare.  It’s less that I’ve learned something, and more that I’ve been able to access a kind of creativity that has been thrilling.”

Along with holding Glass dear for influencing her life as an artist and as a spiritual being, the very start of their White Llama collaboration began with the composer, in 1990. “Theos Bernard’s books were on Phillip’s bookshelf; that’s how I first encountered him,” she said.  “Bernard influenced Phillip. Both Philip and Bernard in turn have influenced me. Bernard represents a person who takes a certain set of risks in search of the unknown.  He then had to come back to America with his discoveries and try to sell it. I believe neither he nor America was ready…his story feels so…American.”

Driven by its fourteen musical pieces — a score played live by Tenzin Choegyal and Glass — and a series of Bernard’s books and letters and visuals from his home movies to support both a biographical journey and an esoteric one, Appino says The White Llama is not a piece of theater.

“I call it a concert with stuff,” she said.  Vocalist and composer Lisa Bielawa works even closer with Glass and his legacy. She has been singing as part of the Philip Glass Ensemble since 1992, and, last year, became the inaugural Composer-in-Residence and Chief Curator of the Philip Glass Institute at The New School.  What it must be like then, not only to celebrate the master through #Glassfest, but to have worked in close proximity with lass for so long. “The Philip Glass Ensemble has had the unparalleled opportunity to partner with Philip over the course of almost the entire history of making new work,” said the vocalist. “Most of us have been sharing the stage with him for decades, hearing creative ideas on the tour bus, trying out new arrangements of his work as he evolved stylistically through new terrain, constantly following new artistic paths together. While the PGE was the first vehicle for his musical explorations, along the way his artistic ‘family’ has grown to include countless new collaborators – superb artists like Jenny Lin and Nikki Appino – and the chance to celebrate his work alongside these members of our extended family is especially meaningful to us.”

One of the first things that Bielawa began touring with when she joined the Philip Glass Ensemble was several performance of the athletic Music in Twelve Parts. Recalling those marathon efforts of 1992, Bielawa said, “I remember telling my parents excitedly on the phone that performing the piece was like running alongside a speeding train, joyfully jumping on and off again.”

In order to go beyond the physical stamina of playing an aggressive, repetitive symphony for just under six hours, Bielawa said that all members of the PGE – keyboardists, woodwind players, voice – have spent years developing techniques that enable them to keep going deeper into the physical challenges of the piece. “The physical stamina requires acute mental concentration to maintain; the mental stamina requires superb physical control to maintain. Music in Twelve Parts is the most seminal of the endurance-based pieces that the PGE performs. It is the ‘team sport’ that brings us the closest to one another and to our audience.”

Once trained, honed and past the point of mere physical bliss – anyone who works out will tell you that nirvana is attained when muscles are at their most taught – Bielawa called Music in Twelve Parts an incredible experience.

“I have felt my own voice grow through the piece, and the piece feels different in my body every few years,” she said. “The PGE’s experience of the performance deepens every time, and its meaning in the development of modern musical ideas has also gained many layers over the years that we have been performing it. I think it is especially meaningful in our own times to have experiences in which the individual performer’s virtuosity is entirely at the service of the group. It is a work about interdependence, a theme that feels more relevant now than ever.”

And of the #Glassfest experience, and this city’s first time opportunity to hear Music in Twelve Parts – something Glass started here in 1974,  Bielawa is elated.

“Philadelphia has been a vibrant center for the creation of new work, a city that has long recognized the role of the artist in the life of the community,” said Bielawa. “We are honored to be able to share this piece, for the first time, in a place that is so resonant with these ideals.”

#Glassfest takes place from February 21st to March 14th at the Annenberg Center for the Performing Arts. More information can be found here.