Transcending Beats and Rhymes: Kahlil Ali is a legend in real time - WXPN | Vinyl At Heart 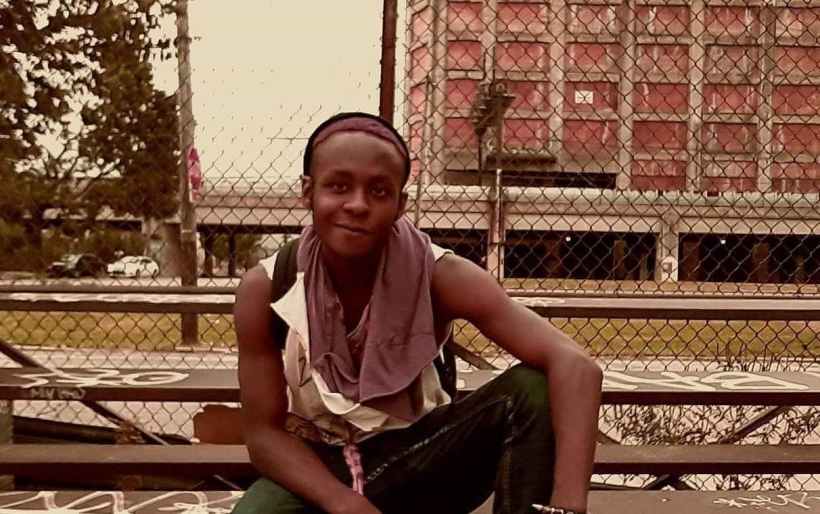 Transcending Beats and Rhymes: Kahlil Ali is a legend in real time

Unbound by genre but deeply, immeasurably hip-hop, the zen-like Kahlil Ali embodies an energy that can turn a room of arms-crossed indie-punks in a stuffy basement into live firecrackers. Their presence on the mic is the same, whether playing to an under-promoted lackluster crowd of hipsters in a South Philly dive bar, or to an unreasonably lit mixed-match group of punks, rap heads, and trip hop-coma induced hippies — theirs is an unwavering abandonment and a hypnotic kenesis.

Basically, they rip. Ali’s versatility as a rapper who can wreck live, distorted punk-y freestyle breakbeats from a makeshift backing band, and as an emcee who sounds perfect and buttery on a soulful, 90’s sounding boom bap track, defines the various energies and influences swirling about in their soul.

Kahlil’s music and live presence authentically reflect their wandering spirit; they’re often bouncing from one strange encounter to another breath-taking adventure, traipsing the South Philly streets as a city-embedded sprite. “I wrote this song after hanging around a lot of homeless people recently,” Kahlil Ali announces on stage from a house show as a slow, moaning loop plays over the system. “I’ve been living here for days / but no one seems to notice” they rap, speaking from a perspective that feels at once like immaculate, empathetic storytelling, and a lived experience.

If they’re playing a character, Ali is embodying them fully and passionately. “I just spit about my everyday life,” Ali replies when asked about the inherent political nature of the music. “I’m not even trying to be political, I’m just aware of the bullshit.” At this same live show, the intro for their powerful statement track “Song 100” (the titular track from 2018’s debut album, produced by “longtime homie Jmanji years ago”) begins with what sounds like a Mumia Abu-Jamal sampled quote about the dangers of reliance on technology as a means of fulfillment. Wrapped in warm blankets of bass and a Kanye-esque choral chord progression played on a warped organ, “Song 100” is the kind of pure, lyrical exposition that can define a rapper. It’s a one minute and fifty second soul burst of raw rhymes and infectious groove with Ali lyrically crawling all over the beat, a ranger returning to the mic after having spent days probing the dark recesses of a broken city.

As ebullient as Kahlil Ali’s music is, it hasn’t always been an easy road. “My life and everything changed when I accepted my own queer identity,” they say. “I’m currently navigating through the same circles with my true self and it’s been hard at times, but I’m a product of my environment and refuse to be false.” It seems that that true-self has been informed by a diverse upbringing where, “homies skated, freestyled, went to LOVE Park after school and weekends,” and by musical genres and art/activist movements that affected them early on. “I learned about punk and hip-hop through skate videos. In [my native] Jersey we still bump boom bap, but I never felt limited to that sound though.”

Now, Ali chooses to be their real, authentic self in their music and their life; their social media feed is filled with anecdotal whimsy, something that they don’t shy away from in their ryhmes, reflecting an emo version of Mos Def-meets-MF Doom at Connie’s Ric Rac vibe. “I just rapped about my daily life.. those cops [that I rap about in songs like “Halfway”] were super racist, homophobic— I knew my rights, but they were bloodthirsty, guns out and all. When they found out my record was clean, they ‘apologized’”

It’s a story many of Black people in Amercia’s cities are increasingly becoming the subject of. Ali, through their music, has found an outlet to combat it. “I started to rap to be more with my culture,” Ali says, reflecting on a musical past that involved touring with punk rock bands to escape the Jersey doldrums. “I remember those early tours, it wasn’t recommended I sit in the front or drive because we’d get pulled over if they saw a Black guy [driving]. I’d tour the south a lot but I’ve had my scariest times at home”

It’s clear that Kahlil Ali’s future in hip-hop is solidified – despite the noise, despite their unconventional approach, despite the path that got them here. Their confidence and impact on the local scene transcends beats and rhymes. When asked how they fell into a collaboration with Philly rap legends Reef the Lost Cause and Moor Mother, Ali simply replies, “I’m a legend too.”