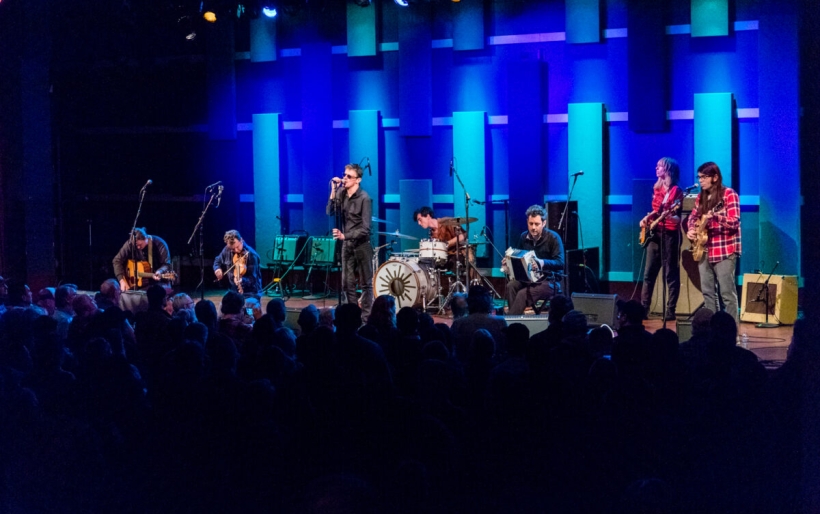 Today’s Free at Noon concert featured more songs about whiskey than just about any other lunch-hour gig we’ve hosted in recent years. Then again, the band onstage featured singer Spider Stacy and bassist Cait O’Riordan, founding members of The Pogues — so drinking songs are kind of their thing.

The show kicked off with “Boys From The Country Hell,” its lyrics very apropos for the time of year — “On the first day of March it was raining, It was raining worse than anything that I have ever seen / I drank ten pints of beer and I cursed all the people there, and I wish that all this raining would stop falling down on me” — and it became quickly obvious that Poguetry was light years ahead of your average “featuring-former-members-of” tribute act. Stacy and O’Riordan’s voices and energy channeled the spirit of their onetime band, and they were backed heroically by Lafayette’s Lost Bayou Ramblers.

Though the Ramblers’ own music deals more in cajun stylings — and we heard them play their “Si J’Aurais Des Ailes,” which Stacy referred to as “some of that Louisiana French music” — the way the band takes folk tradition and amplifies it with rock energy lends itself perfectly to the way The Pogues did the same with Celtic music and punk in the 80s.

In the second half of the show, we heard “Dirty Old Town,” a high-energy take on The Clash’s “London Calling” (apropos, since Joe Strummer shared lead vocals with Stacy in a post-Shane 90s iteration of The Pogues), and the set’s highlight, a transcendant rendition of “The Auld Triangle.” In it, Stacy’s funereal vocal performance was backed by swirling static and drone from Andre Michot’s cajun accordion and Jonny Campos’ guitar, with Eric Heigle slapping a triangle laid out on the stage during the chorus; magic.

The song eased into a fiery “Body Of An American” — a treat for fans of The Wire in the audience, no doubt — and closed with a revved up encore of “Streams of Whisky.” Listen to the performance in full and check out a photo gallery below; Poguetry plays a sold out concert tonight at City Winery Philadelphia.