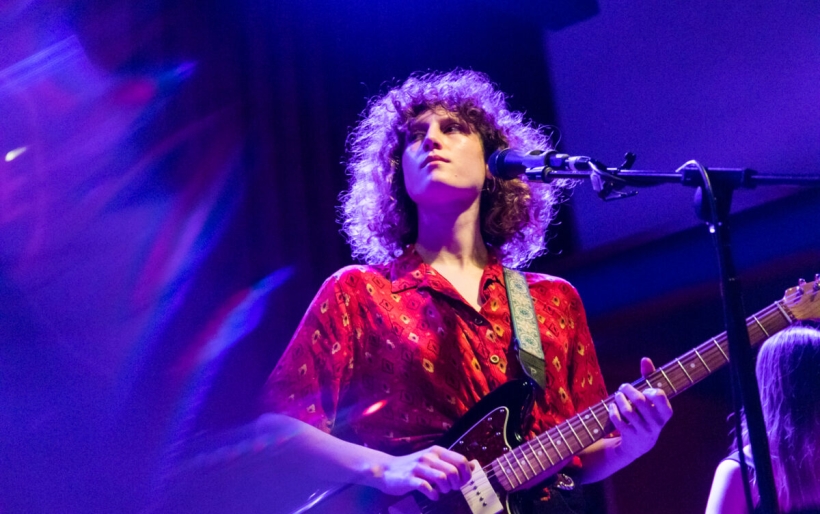 Squirrel Flower holds their own at World Cafe Live

It’s a bad time to be a touring musician. Big music events like SXSW and Coachella have been cancelled and postponed due to the Coronavirus, throwing off tour schedules. Everyone is wary of large crowds and public spaces, and it showed in the crowd at Squirrel Flower‘s performance at World Cafe Live Tuesday night. Those in self-isolation missed out, however, on a brief glimpse of a rising artist just before she hits it big. Singer-songwriter Ella O’Connor Williams’ big sound felt outsized for the cozy lounge, and is sure to be moving on to bigger stages in the near future.

Opening for the night, in what seemed to be a last-minute line-up change, were Philly natives Swim Camp. Led by Tom Morris, the group played a selection of their sleepy, hazy folk-rock, somewhere in the range of Slaughter Beach, Dog and Nap Eyes, with understated vocals and a chill tempo throughout. Similar to Squirrel Flower’s impending set, most songs began modestly but built into bigger sounds. Morris counted down after each song, to remind the audience of how much time he had left on stage, and checked in on the election results from the primaries that night (at the time, results were still unclear).

Squirrel Flower entered shortly after, O’Connor Williams playing by herself at first, quietly on her electric guitar, before the rest of the band joined in. O’Connor Williams can hold her own – her sonorous and full-throated voice filled the room, evoking the depth of Mitski’s vocals or the almost-operatic quality of Haley Heynderickx. Her band matched suit, bringing powerful guitars and a strong rhythm section, but stepping back when O’Connor Williams took charge. Many songs possess a spacious, country-adjacent sound, like “Eight Hours” or “I-80,” while others incorporate catchy guitar licks, like “Red Shoulder,” to push the band to its fullest potential.

The majority of the set focused on releases from their latest album, I Was Born Swimming, the title a reference to O’Connor Williams’ unusual birth in a caul sac membrane. Those born under these circumstances often are the center of superstition, whether believed to possess good luck or a predisposition to witchcraft or vampirism. Squirrel Flower’s music may not show signs of superhuman ability just yet, but nevertheless evoked an aura of mysticism. Their set wrapped just before ten o’clock with no encore, as the audience rushed out to avoid catching anything, but Ella O’Connor Williams’ voice rang through a little longer.