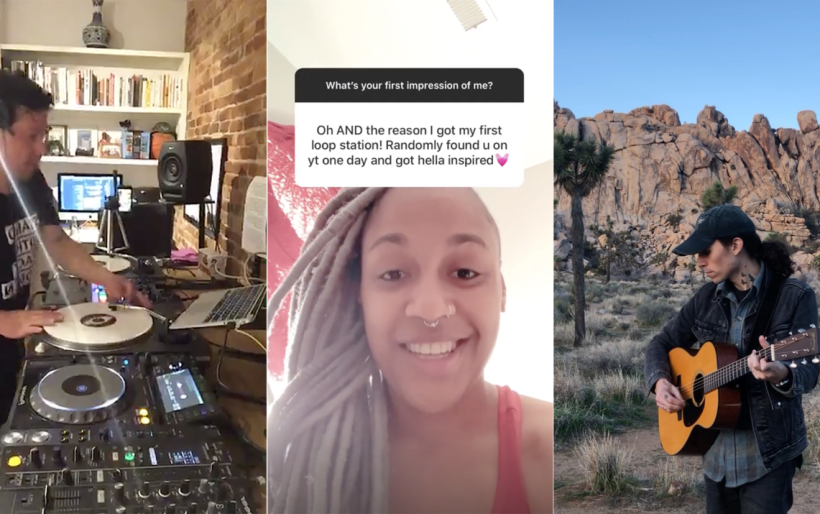 It’s staggering how much the music scene (and the world, really) changed overnight in the wake of the Coronavirus outbreak. Last Monday, artists were still in shock that Austin’s SXSW festival had been called off, but many planned on moving ahead with their spring tour plans, as tour was their source of income for the season. This Monday, most live music has been cancelled, we’re being collectively encouraged to stay home in self-isolation, and folks on the road are making their way home.

But musicians and others in the music industry are nothing if not resilient, and many are harnessing social media to make the best of a terrible situation: finding a way to make up for lost income, helping raise money for others, interacting with their audience, and not letting the outbreak keep them from putting music into a world that desperately needs it right now.

Here are five ways we saw members of the Philly music scene beating coronavirus this weekend.

The 36 hours between Thursday morning March 12th and Friday night March 13th was a rapid string of show cancellations, with most venues around the region trying to determine what exactly to do with their show calendar. Philadelphia Folksong Society took a unique approach with the Friday night gig at their Roxborough venue featuring acclaimed Boston fiddle player Mari Black. Instead of cancelling the show, the venue still hosted it, but told ticketholders to stay home, sending them a live streaming link instead. The event went over so well that PFS has announced plans to move to a digital concert series during the pandemic, and is asking interested performers to apply via their Facebook page.

Philly’s Cosmo Baker has made his living as a DJ for the past 30 years, and with travel being restricted, and gathering in large groups being discouraged, he’s temporarily unable to do that. “Yes, it’s a good thing we’re staying inside, quarantining ourselves in hopes of the storm passing as quickly as possible,” he told a Facebook live audience on Saturday night. “But one thing I know about humans is we need congregation and communication in order to thrive. I’m not giving up the fight, I want to see you in the fight with me.” Set up in his home studio, which he tongue-in-cheekily referred to as Baker Manor, Cosmo brought the party to his followers: a phone was positioned to the left of his turntables, delivering a live feed to Instagram, while another device delivered the Facebook Live feed on the right, and as Baker spun a sick 90-minute set of house and disco bangers, he worked both sides of the virtual room. “Let me hear it from the Facebook side!” he’d shout to a flurry of hearts and thumbs-up, darting across the way to say “Okay, now let’s hear it from the Instagram side!” Brilliant. His doggo makes an appearance at the 44 minute mark, he tells fans that they can help by tipping him on Venmo or CashApp (@CosmoBaker on both), and he promises to do more of these sets as the quarantine progresses.

Engagement with the digital audience is something Philly soundscaper and singer-songwriter Jacqueline Constance has always excelled at, and in the light of the outbreak, it took on another level of significance. On Sunday morning, she opened up her stories to chat with fans, asking them the simple question: “What was your first impression of me?” People commented to say that they thought she was a powerful singer, or that as a Philadelphian she probably kicked a few people’s asses in her time — one person said that Jacqueline’s use of technology in performances inspired them to buy their own loop station — and as the comments flowed in, she responded and reacted to them in real time, taking her mind and her fans’ off the alarming string of news flowing in from other sides of their timeline.

Indie-folk singer songwriters Anika Pyle and Roger Harvey found themselves in a difficult position last week. They were unsettled by the rapid the spread of coronavirus, and knew that their planned spring tour would be risky. But they also were relying on that spring tour for income. They got a few dates in before realizing after a Los Angeles show that continuing would be a mistake. They cancelled the rest of the tour, and turned to head home, but decided on the way to create something positive out of the journey. “I’ll be sharing videos of me performing songs I would have been playing on tour as I drive through the desert this week,” Harvey wrote on Twitter. “I believe the would could use some music & I need it too. Now more than ever.” In a sun-splashed motel room, Pyle performs “Colorado Sage,” a song she says is about growing up out west; Harvey performed “Two Coyotes” in the high desert of Joshua Tree. Follow their journey on Instagram at @anikasneaka and @xorogerharvey.

making the best of these show cancellations by sharing some songs on the way from LA to Austin. this one’s about growing up in colorado, running through sage, rose quartz under foot, mountains in the distance. video filmed by @xorogerharvey ✨ head to his profile to see him singing “Twice as High” which also happens to reference the centennial state �̿

Second song in our series ‘From LA to Austin’. ‘Two Coyotes’ a love song for the US-Mexico border sung at 7am this morning in Joshua Tree National Park. Made the long haul to Tucson today, where we’re settled safely for the night. This is about as good as tour gets right now. Go to @anikasneaka’s profile to see the song she’s sharing today. Thank y’all for sharing in your stories & giving these more visibility. We’re singing our way back home.

When artists find themselves in the storm that Roger, and Anika, and Cosmo, and any number of others are weathering — a very real loss of money and sustainability in their lives — it helps to know that there are others looking to build support systems. Fred Knittel of WXPN’s Folkadelphia launched a project over the weekend called Co-Mission: An Artist Relief Compilation. “Art is not created in a vacuum,” Knittel writes. “It is made by artists, human individuals who not only dream up, labor at, and sweat over their art, but who also need to survive, like all of us do. At the very minimum, we need food, water, shelter, clothing, and access to basic goods and services to live, but right now even that access is uncertain for many, especially for those people who work in financially unstable fields or in the gig economy, like every musician does.” With this project, Folkadelphia will pay artists for new recordings tracked in their home studio or bedroom during the pandemic. These recordings would be released as a charity compilation, and money raised by the compilation would go right back into more commissions for additional releases. “What we do hope for is that this idea will shine a light on the uncertainty that artists are feeling, the plight they are experiencing, and the small ways that those of us in more financially secure positions can lend them extra support and love in these unsettling times.” Read more and get involved here.