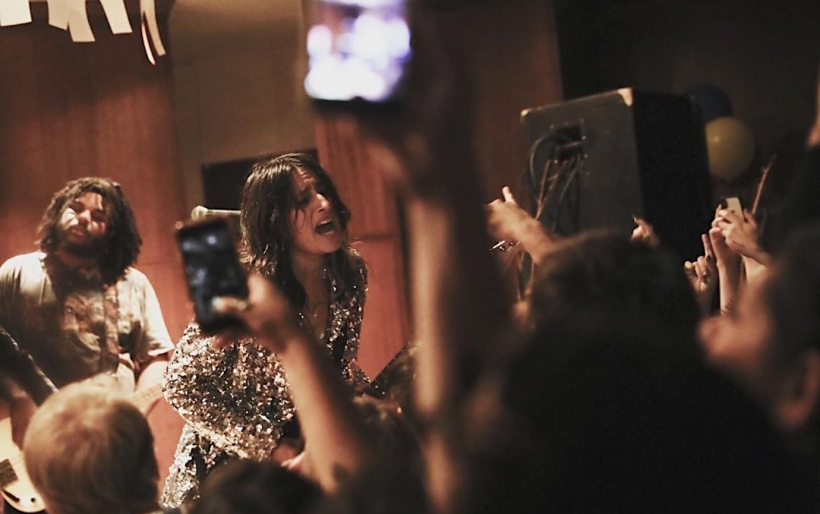 Like so many artists over the past week and a half, Philly’s Mannequin Pussy was forced to cancel its spring tour last week as the spread of the coronavirus pandemic — as well as the spread of fear and concern surrounding it — began to escalate in a big way.

Mannequin Pussy, who released their stellar record Patience last fall on Epitaph Records, was on the road opening for Best Coast from late February up until last Friday when they arrived in Detroit, found their show at El Club cancelled, and drove 15 hours back to their hometown. Last night singer-guitarist and songwriter Marisa Dabice phoned the XPN Local Show for an interview, and she said one of her biggest regrets about the situation was the incredible energy she was experiencing at shows up until the end.

“Tour was going so well,” she said. “It seemed like people were coming out and partying like it was the last show they were going to be at for a long time.”

Cancelling tours is never an easy call for independent artists; playing gigs and selling merch directly to fans is how bands make their money, but it goes beyond just the music itself. In our conversation, Dabice talked about the ripple effect that the tour cancellations have; in addition to the performers losing money, it also impacts their support staff — merch sellers, sound engineers — as well as production and hospitality staff at the venues.

“Realizing the impact of our tour going away and how many people’s livelihoods are being affected by that is really unsettling,” says Dabice, noting that in 2020, bands are job-creators in a way that not everyone realizes.

So what can fans do while their favorite artists are homebound? Dabice says there aren’t a ton of avenues of direct support, but merch is a big one — so now is the time to hit your artist of choice’s webstore and buy that vinyl copy of their new record, or that hoodie you wanted to get at the gig. She also encourages independent artists to use this time to take power of their own means of production: “Being the one who sells your own merch is very important in a time like this,” she says, noting that a lot of younger bands she encounters often sign distro deals and merch deals early in their career. But “that’s just another way someone gets a cut of what you do and how you work. I’d encourage bands who find themselves with a lot of time off to take over. It’s a lot of work, but it’s something you can easily do to stay connected to people.”

For Dabice’s part, she and Mannequin Pussy are taking some time to reflect and regroup after an abrupt end to their spring tour. She’s seen the influx of artists livestreaming performances from home, and though she was initially resistant to the idea, she has begun to think about its possibilities — such as leading guitar tutorials, teaching fans how to play their favorite MP songs. She also hopes to work on new music, as well — “it’s all artists can really do at this point” — but first, she’s got to fulfull the couple hundred online merch orders Mannequin Pussy has received since arriving back home.

“It’s kind of overwhelming,” Dabice says. “But I feel so grateful to be part of a community that so intensely supports each other when things are upside down. … We all find ways to be compassionate when we’re presented with situations out of our control.”

Below, listen to our entire conversation from the XPN Local Show.

My conversation with Marisa stemmed from a Twitter exchange over the weekend, where she suggested spinning Philly bands on XPN who were in the same boat as Mannequin Pussy. It was a great idea, and I took her up on it; the first 90-minutes of the XPN Local Show is entirely composed of artists who were supposed to be on the road right now, and instead are homebound; Harmony Woods and The Districts to Lovelorn and Kurt Vile. Listen to an archive of the entire two-hour episode of XPN Local, and check out the playlist below.