The Skeleton Key: A band called Quarantine, a Philly Shreds emergency fund, and how to get to the gig when you can't leave your house - WXPN 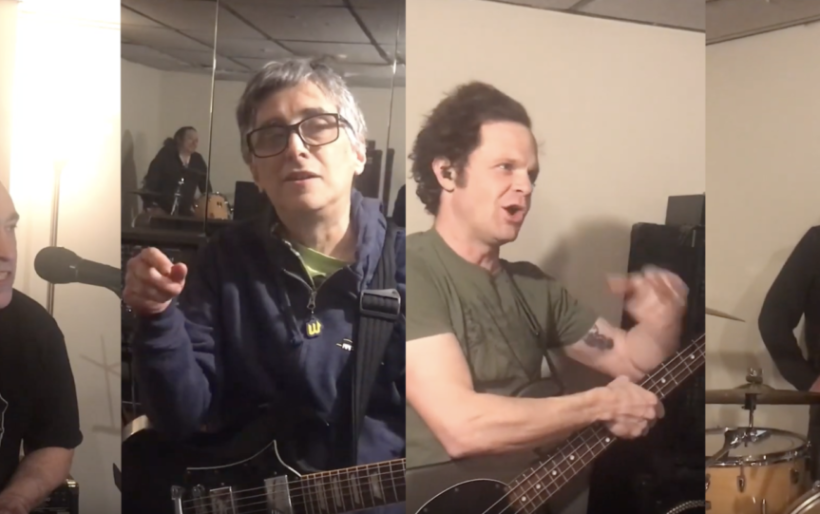 The Skeleton Key: A band called Quarantine, a Philly Shreds emergency fund, and how to get to the gig when you can’t leave your house

How do you write an events column when there are no events to write about? In the age of coronavirus, the age of quarantines and a shortage of hand sanitizer and everything being canceled, it’s hard to find anything to be excited about. Indeed, as I write this article, I feel like we’re all just waiting for the other shoe to drop and for this to get worse.

For the past week my phone has been lighting up at all hours of the day with cancellation notifications for all the events that were supposed to be happening here in Philly between now and the foreseeable future. On Monday, we found out that the city is basically shutting down for the next two weeks, at least. That means no concerts big or small, no DJ nights, no bars, no nothing.

Still, what’s the point in giving up? People are still making music, even if shows aren’t happening for the time being. More than 13,000 people tuned in to a Code Orange livestream a couple days ago. I’ve seen lots of musicians doing solo shows on Facebook or Instagram. A friend posted that her 60 person choir was getting together to practice via video conference!

With that in mind, I figured that instead of the normal 2,000 words about all the upcoming events, I’d instead talk about all the things we can do to get through this without getting to the gig. Sad? Sure. Angry? For sure. But if this is what we’re dealing with – and it is – we all need to make the best of the situation because the alternative is settling further into the miasma that is our current reality and who the hell wants to do that?!

Before you start reading this, I’d recommend you put on the demo from brand new West Philly punk outfit Quarantine. No, this is not a joke. They actually started a few months ago and just put this out in mid-February!

First and foremost, let’s talk about what to listen to. There’s tons of quarantine-themed playlists going around but not only are those not particularly exciting – “Isolation” by Joy Division, “It’s the End of the World As We Know It” by REM, yes, we get it – but I’m really not a playlist kind of guy, especially when I have nothing to do but listen to music.

Not only is there a ton of great new Philadelphia music out there right now but all those musicians need your help! So do your part, put on the new Kilamanzego (and read our review over here), and if you like it throw some money at them. Same with Screaming Females, who had to cancel a whole tour. They have a recently-released singles collection, tons of tour shirts, and guitarist Marissa Paternoster is putting out a graphic novel with Don Giovanni’s Joe Steinhardt in January and you can get an advanced copy via their Kickstarter.

Other newly released albums include “Who Sent You” by Moor Mother-led jazz supergroup Irreversible Entanglements – truly the anti-isolation album we all very much need right now – “Tub of Lard” by noise rock four piece Eye Flys, and “Gloves to Grand Air” by the absolutely charming West Philly jangly rockers Psychic Flowers. I just saw that Bandcamp is waving their share of all purchases on Friday so literally the full amount you pay goes to the band. Get on that! Pay more if you can!

That’s just a few out of hundreds. There’s neither the time or the space to mention every single band in Philadelphia but as you know just about everyone in a band is probably working a service industry job because those are the ones that let you take a couple weeks off to go on tour or whatever. Just about all those jobs are currently shuttered and folks are scrambling to figure out how to pay the bills. There’s unemployment, sure, but that all seems more than a little confusing right now.

There have also been various crowdfunding efforts put together to try and prop up those in need. A couple I want to highlight are the Mace Canister Recordings-organized “Philly Shreds Musician Emergency Fund” and the one Fred Knittel from WXPN’s Folkadelphia has started putting together called “Co-Mission: An Artist Relief Compilation.”

The idea here is not necessarily to pay someone’s rent but rather to be able to help in smaller but still significant ways, especially in times of crisis. As Mace Canister’s Chuck Meehan wrote on the GoFundMe: “Funds raised will be disbursed on a as-needs basis. This isn’t a ‘give until it hurts’ as much as ‘toss a bit into the kitty’ appeal, donations of any amount will be gratefully accepted.”

Alright, so we’ve covered a little bit about what to listen to and what local groups are raising money for out-of-work musicians. But what about you? You can’t just sit around and listen to music all day and find stuff to spend money on that’ll directly impact out-of-work musicians, right? Well, you could read a book, binge something online – I’m midway through the original “Life on Mars” and it’s just as great as I remembered – or maybe watch all “Big Questions with The Dead Milkmen” videos the band has been making the last few months. Highly recommended!

But at some point you’re going to have to do the inevitable. No, not break social isolation, don’t you dare. You’re going to have to break out that guitar or bass or flute or laptop techno noise project you never really quite mastered. If there was ever a time to learn how to play music, it’s now. And instead of trying to find that “Led Zeppelin For Dummies” book your ex bought you that for some reason came with you through four different moves across the city, why not hit up one of your musician friends who has given lessons before – if you don’t know anyone, ask around – and see if they have room in their schedule for some lessons via video? You finally master the guitar parts from Anti-Manifesto by Propagandhi, including that cool solo, and someone gets some much-needed income. Win/win.

Speaking of making noise, both Korg and Moog have made some of their synth apps free for the time being. I downloaded the Kaossilator by Korg and it’s been both very fun and oddly therapeutic to make noisy, weird loops. Order from chaos, even if that order sounds like a building being knocked down to a sick techno beat. Also: highly recommended.

Before I get to the live broadcasts that are happening, I do want to point out that this current state of affairs won’t last forever. It’s been very hard to remember that over the past few days when the world very much seemed doomed and literally everything changed, but we will get through this. In my last column I mentioned how excited I was for Ted Leo’s Dexys Midnight Runners cover band Too-Rye-Ay playing at Johnny Brenda’s. While that show of course didn’t happen, it has been postponed until July, when it will definitely happen. It has to. So that’s on my calendar. Break Free Fest is on my calendar. Porchfest is definitely on my calendar. I can’t wait for all these things. And I will see you all there.

On Thursday the previously scheduled Warp Factor 9 show is happening online. This is the avant and classical series’ first year anniversary and even though it’ll be bittersweet, I’m still excited to hear trumpeter Paul Giess and pianist Ilan Isakov perform. Also on Thursday another canceled event, “Community Service: A Night of Music and Dancing” with DJs Oluwafemi, Rashid Zakat, and Lil’ Dave, is shifting to the internet.

There isn’t a great calendar yet for online concerts and obviously everything is in flux. Key favorite Madam Data has been going live daily on Instagram, which is awesome. Waxahatchee is performing Thursday night. I’ve seen lots of talk from different musicians about possible live streaming and I am a hundred percent sure that will happen. Our own John Vettese put together a list of concerts over here including stuff from The War On Drugs, Dave Hause, and Matthew Law.

If you’re into this idea make sure to pay attention to social media – because what else are you going to do, read the news all day?! – especially to venues and concert organizers like the Philadelphia Folksong Society, who announced they’ll be organizing some streaming concerts. There is also a heavily-trafficked Facebook group called Viral Music where a lot of people, including AJ Ghent who was supposed to play at the Folksong Society next month, have been posting about online shows.

I know it’s not great but right now nothing is. So much of watching live music is the experience of being there and that can’t be replicated. But it’s both necessary and nice to connect and to remind ourselves that this too shall pass. I’ll see all of you right here next month. Remember to wash your hands! All hot quarantine tips can be sent to me via Twitter at @talkofthetizzy.