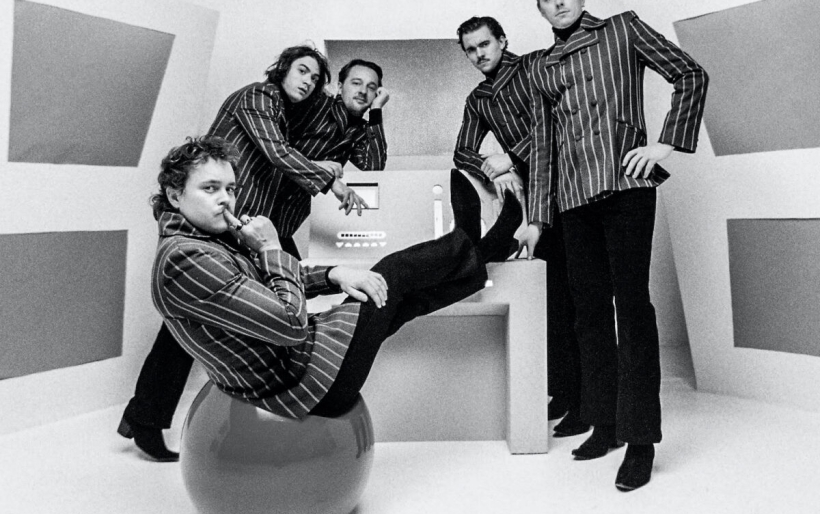 Ceramic Animal | photo by Matt Noll | courtesy of the artist

Born in the aftermath of a sudden death, Ceramic Animal’s latest LP, High End, finds singer Warren Regan navigating the complex space between learning how to grieve and learning how to reshape his life into some semblance of a new normalcy. The loss behind the album is an intimate one – the Regan brothers’ father – and a recurring theme seems to be that nothing in life, not even the forces that seem immovable, is guaranteed to last. With inspirations pulled strategically from their father’s favorite albums — T-Rex’s The Slider and The Rolling Stones’ Sticky Fingers — High End sonically envelopes the listener into a maturation of Ceramic Animal’s staple dirty-blues feel. As far as the instrumentation goes, it’s not necessarily a downer listen. Lyrically, it’s an exploration of humanity’s organically occurring dichotomies with a specific focus on life in the face of death.

As the band was getting ready to record at close friend Sam McKinley’s lakeside cabin in Nashville, Indiana, a massive storm touched down around them and emphasized that “anything can end at any time” feeling surrounding High End. Ironically enough, as the release date hits, we’re now all dealing with that same sense of impending dread regarding the COVID-19 crisis. As you listen from front to back, it’s important to recognize one crucial message within Regan’s lyricism: the person you become in the aftermath of a crisis is a direct reflection of how you deal with it in the moment.

All of these themes come to a head in the title track, “Another High End.” The first half of the song is slow-burning, with a glimmering introduction and understated echoing verses. Each part within the instrumentation is played intricately, and seamlessly blends into a spacey and atmospheric foundation for Regan’s constantly building vocal lines. The chorus comes into an anthemic crescendo with an enigmatic belt, rushing guitars, and sweeping keys and percussion. There’s still that signature feel of old-style blues and Western genres, but it certainly isn’t as overt as it is in previous Ceramic Animal releases. This album leans further into nostalgic rock, which is likely a result of the aforementioned Stones and T-Rex influences and other classic albums that the Regan brothers grew up on. There’s an evident play on motifs of nostalgia and comfort within “Another High End” and other tracks for that reason, which makes this one of their most personal releases to date.

While the topic of the album may be rooted in a deeply personal experience, the themes can be read from a universal angle, as Warren tells us:

“I feel songs with specific messages tread such a thin line before becoming trite or preachy and a song is more inclined to lose its power as the lyrics become more superficial. The best dichotomy I can think of is Neil Young. Between the tracks “After the Gold Rush” and “Who’s Gonna Stand Up?”. One of these has the listener ponder the vague emotional weight of humanity’s timeline, the other one tells the listener to end fracking now to save humanity. One asks you to find your own answer, one thinks it has the answers. People are at their most powerful when they question things for themselves.”

Above all, this is an album created for the purpose of healing. It contains all the incomparable pieces of Ceramic Animal’s inherent sound – bluesy in all the right places, heavy where it counts, with lyrics that read like an iceberg. Despite that familiarity, there is an interesting juxtaposition of nostalgia and maturation thanks to the specific inspirational choices the band made during the writing process. This feels like an album that was created for themselves alone as well as for anyone who is coming to terms with any sort of struggle, a collection of songs that are intimate as well as universal.

High End is out tomorrow, and you can listen to a few other songs from the record below, and grab a pre-order here.