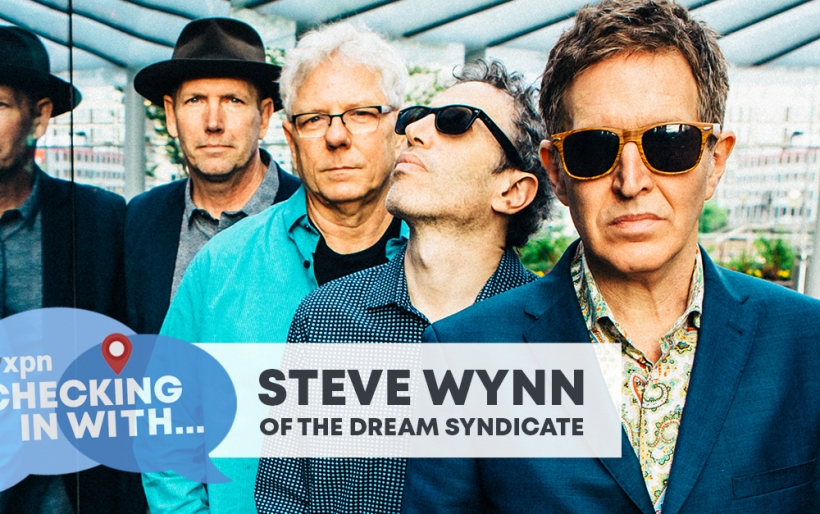 The Dream Syndicate | photo by Chris Sikich | courtesy of the artist

Checking In With… Steve Wynn of The Dream Syndicate

In times of crisis, it’s more important than ever to check in on your friends and loved ones. Here at XPN, we’re Checking In With our extended musical family to see how they’re holding up during the Coronavirus quarantine…and what music has kept them grounded. Today, Dan Reed chats with Steve Wynn of The Dream Syndicate.

Veteran rocker Steve Wynn of The Dream Syndicate was at home in Queens, New York, when we caught up with him on the phone this week. “On the news in the last day, there’s been a lot of news and footage from Elmhurst Hospital, which has become the triage center for this area,” Wynn says. “That’s a block from where I live. It’s eerie to think damn, that’s just down the block! But we’re all hunkered down inside right now, so things that are one block away seem 100 miles away.”

Our conversation covered his favorite music, the struggles of being a musician at this moment in time, and the 20-minute epic at the center of The Dream Syndicate’s new record The Universe Inside, out April 10th. Below, listen to Steve’s full Checking In chat with Dan Reed, and peruse his music picks.

Checking In With Steve Wynn

Favorite Song of All Time: “Tangled Up In Blue“ by Bob Dylan

“It’s a song I come back to all the time as my favorite, for lots of reasons, for sentimental reasons. It’s sort of if my wife Linda Pitmon and I have a song that’s our song, that’s probably the one. So right away, it’s a special song. But also as a music fan, that’s heroic songwriting, that’s olympian, that’s star athlete, that’s Joe Montana, Tiger Woods, Barry Bonds, it’s real heroic stuff. You can’t just write a song like that every day of the week.”

Song That Raises Your Spirits: “Bridge Over Troubled Waters” by Simon & Garfunkel

“It seems like an obvious choice because it is a gospel song, and it was proven so well when Aretha Franklin did a good cover of it. It’s a simple song in a lot of ways — only a handful of chords in the song — and the message is I’m there, I’m by your side, I’ll be your strength. And it could be a gospel, religious thing saying that whoever you believe in is there as your rock. But anything you can look to to comfort you, whether it’s love, whether it’s literature, whether it’s music, the things that stand by you in tough times mean so much in times like these.”

Song That You’re Most Proud Of Working On: “The Regulator” by The Dream Syndicate

“As a former DJ, I used to love playing long song. Of course for the obvious reasons, you get to get up and stretch your legs, do whatever you need to do. But also, I grew up in the era of freeform radio where stations would play 20 minute songs like it was nothing, and you’d go on a real trip, a journey. It’s something I like in music, and it’s why I like this song so much. I’ve never been in a band that did a song this long, 20 minutes, and it really is a journey. It’s sculpted, it’s constructed, it’s kind of weird, it covers all the ground of everything I love and I know the rest of the band loves, from free jazz to soul to psychedelic music to, you name it, krautrock…it’s kind of all there.”