Checking In With... Chill Moody - WXPN 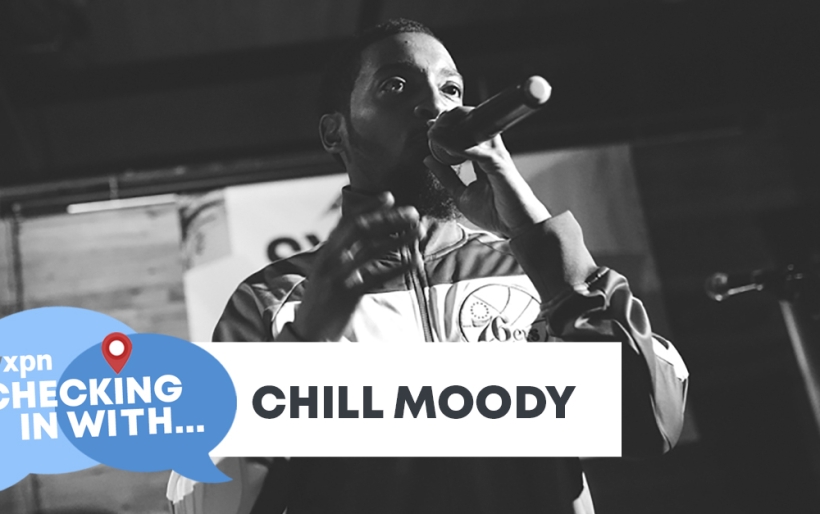 Checking In With… Chill Moody

In times of crisis, it’s more important than ever to check in on your friends and loved ones. Here at XPN, we’re Checking In With our extended musical family to see how they’re holding up during the Coronavirus quarantine…and what music has kept them grounded. Today, John Vettese chats with Chill Moody.

Philly rapper Chill Moody had a lot of plans that got sidelined when the Coronavirus hit last month: a panel and showcase at SXSW, a homecoming concert and a video shoot back in Philly for his new single “Jawn on My Left” — the ban on social gatherings left him unable to continue with either.

He remains positive, though, when we caught up with him on the phone this week: “I’m good. Really I’ve just been creating, writing a whole lot, I’ve been reading a couple new books and a couple new things I hadn’t gotten around to reading that I had. Right now I’m reading David and Goliath from Malcolm Galdwell, and I also have his newer book Talking To Strangers. I got both at the same time and never got around to reading either, and thought, let me start one of these real quick.”

Listen to our full Checking In conversation with Chill and peruse his musical picks below.

Checking In With Chill Moody

Favorite Song of All Time: “These Three Words” by Stevie Wonder

“I was five or six when that song came out. I had some allowance and my mom let me buy my first CD. And we used to have these nametags that said property of — mine said Property of Chill — and it was the first CD I got to put my sticker on, the Jungle Fever soundtrack. I ran that song forever, I really really love that song, and every time I listen to it, I think back and I feel like a young bol again.”

Song That Raises Your Spirits: “Can’t Tell Me Nothing” by Kanye West

“The times when I’m at my lowest, nine times out of ten it’s because I’m doubting myself or doubting something, and that song is the ultimate antithesis to doubt. It’s the story of someone who consistently feels like the underdog. It’s something I relate to.”

Song That You’re Most Proud Of Working On: “Jawn On My Left” by Chill Moody featuring Peedi Crakk

“I came up a Peedi Crakk fan, and I’m still a huge Peedi Crakk fan. And I reached out — you never know how it’s gonna go when you reach out with a record, it might not be their vibe, or they might not be in the mood. A thousand things can happen. But when I sent the record, he was right back like ‘I really like this, let’s do it, we gotta shoot video.’ He got all in with it, completely what I wanted but completely unexpected. It was a pleasant surprise, and we came up with something really dope. [Peedi and I] see each other in passing, he performed on the Chill Moody music stage with DJ Aktive July 4th last year. So we were definitely cordial. There was a mutual respect for what we were doing. But making music is a different thing. There’s a bunch of people I’m really tight with, but for them to respect your craft and respect what you’re doing to get on a track with you, that type of cosign is a little bit different than just hanging out and talking. Once we made the song, we got to really build in the studio, we got to work on it in the studio together, which is real rare in these days, that was definitely an added bonus to it — getting able to talk man to man instead of rapper to rapper.”