Checking in With... Maxwell Stern - WXPN | Vinyl At Heart 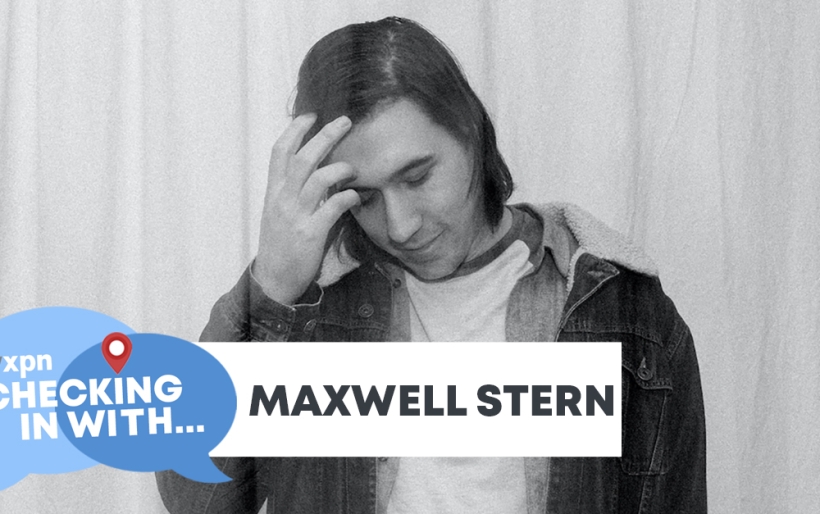 Checking in With… Maxwell Stern

In times of crisis, it’s more important than ever to check in on your friends and loved ones. Here at XPN, we’re Checking In With our extended musical family to see how they’re holding up during the Coronavirus quarantine…and what music has kept them grounded. Today, Rachel Del Sordo chats with Maxwell Stern.

Today we checked in with Philadelphia-by-way-of-Cleveland singer-songwriter Maxwell Stern. Right at the beginning of the COVID-19 pandemic, Stern released his new single “Water Tower,” which is going to be on a new album Stern will release this summer on Lauren Records.

Since the start of quarantine, Stern has been keeping very busy. “My girlfriend and I moved into a new spot just after the quarantine started, so setting up a new living space and getting more time together has been a great outlet to channel our energy into. My day job doing design work also keeps me pretty busy and I am incredibly lucky in that regard. I’ve been running a lot – since the quarantine started I’ve run something like 60 miles, which isn’t that much but it’s also more than I’ve ever done in my life.”

Stern has also been getting his new album ready for its summer release and going through a decade of live video footage of himself and his bands Signals Midwest and Timeshares for a project with Ottica Productions.

Check out Stern’s Checking In music picks below.

Favorite Song Of All Time: “Lost In The Supermarket” by The Clash

“My friend Josh showed me London Calling when I was 13 or 14 years old, and it blew my mind open. There are so many things I love about it. It’s a Strummer song, but Mick Jones sang it – one of the heights of their collaboration. The rhythm section is amazing on this song, particularly the drumming, and the chord structure is beautiful. It’s still debated how that main riff is played, and there aren’t really any videos of them playing it live (trust me, I’ve looked) so I like that it’s a bit of a mystery. My dad and I still talk about this song and how wistful and evocative the lyrics are, about suburban upbringing and the depersonalization that can come with consumerism. That ‘long distance callers make long distance calls’ gets me every time. And there’s a great guitar solo, because of course there is. I got to sing this song backed by The Warhawks at a Clash tribute show back in December at World Cafe and it was three or four of the most fun minutes I’ve ever had on a stage.”

Song That Raises Your Spirits: “Bring It On Home To Me” by Sam Cooke

“I would say the version of ‘Bring It On Home To Me’ from Sam Cooke’s 1963 show at the Harlem Square Club.  My buddy Matt Sanders showed me this record on my first-ever tour. I think it’s the best live record ever made.”

Song That You’re Most Proud Of Working On: “Water Tower” by Maxwell Stern

“I’ll say ‘Water Tower’ from my forthcoming solo record, because everything it took to bring it into the world was so collaborative and fun. It was a song that had existed for three or four years in various forms and I had almost used it in other bands I play in, but it never really clicked. After fighting with the verses I threw the whole thing away for a while, but rediscovered it in an old note on my phone the night before a Headroom session with Kyle. We made a drum loop, did a couple passes through it and it started to click, and Kyle kept pushing me to stick with it. I worked on it more at home and added a bunch of extra vocals and low harmonies. And then when we finally got to do the studio version, it was the first song I heard with real drums. My buddy Adam recorded them in Chicago and sent them over and when I heard the playback for the first time there was this great moment of, ‘Holy shit, this is gonna work!’ And the video was super fun to make too — Signals Midwest played in Brooklyn just before the quarantine went into effect, and my friend Chris and I spent the next day just skateboarding around Prospect Park and filming ourselves just cruising in the sun. We worked on the video together, and I did some animations and editing stuff that I’d never done before. So now when I look back at it, I can trace the through-line of everyone I worked on it with.”