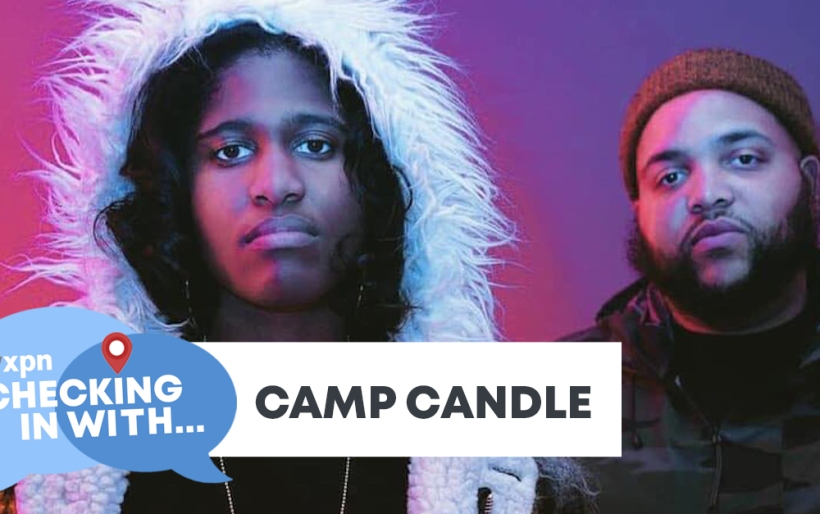 Checking In With… Camp Candle

In times of crisis, it’s more important than ever to check in on your friends and loved ones. Here at XPN, we’re Checking In With our extended musical family to see how they’re holding up during the Coronavirus quarantine…and what music has kept them grounded. Today, John Vettese chats with Camp Candle.

The two creative minds behind Camp Candle are self-quarantining in their own separate homes, but that didn’t stop them from joining us during WXPN’s Public Radio Music Day digital concert series last Thursday. Nu-Ra and Hetepsa were able to pull off a coordinated, socially-distanced concert from remote locations, while chatting with me about how they’ve been doing during the pandemic.

Producer and percussionist Nu-Ra tells us that he’s been at home with his kids and trying to make the experience fun for them with online yoga classes and fun recording projects in his home studio. “I’m trying to stay active and not active and not be inactive, because then all those thoughts start coming in: ‘dag, I wanna go outside!'”

Singer and lyricist Hetepsa says “I’m fortunate enough to still be working my regular job Monday through Friday. I’m also going to community garden plot, growing some food; I’m reading, playing X Box. Doing some meditating, I need to be doing that more, but X Box has taken over my life right now.”

Below, watch Camp Candle perform “Weapons” and “Save Me” from their respective home setups, listen to our entire Checking Through spotlight, and peruse their musical picks.

Checking In With Camp Candle

Favorite Song Of All Time: “Sing” by Slowdive and “Reckoner” by Radiohead

Nu-Ra: “I’d never been on a plane till I was 26, and I was listening to Souvlaki the whole plane ride, and [when I put it on now] I like to go back to the place where I’m going up in the air and looking over the city and seeing all the pretty lights and stuff. That’s been keeping me cool.

Hetepsa: “I can listen to ‘Reckoner’ for an hour at a time on loop. It’s like my brain-decompress song. It’s like if I need a good therapy session and I’m not going to therapy, the second thing will be ‘Reckoner.’

Song That Raises Your Spirits: “Return of the Mack” by Mark Morrison and “Square Biz” by Teena Marie

Hetepsa: “It never fails to get me hype. When she goes ‘WHEEEEE,’ it’s over, whatever you’re feeling, you gotta move that out of there. That’s my jam.”

Song That You’re Most Proud Of Working On: “NRT” and “Come With Me” by Camp Candle

Hetepsa: “I think it’s just, we were so open to experimenting. We always are but we kind of let loose [on If We Had A Pool]. We had all these other songs and narrowed it down to those three, and during that process of cutting songs, sometimes you get to a point where you try to force something. And we just let go. We had a fourth song, it was going to be a four-song EP, and I was just like I don’t feel it, and he was like I don’t feel it either. And we were like okay, three songs. So it gave us the freedom to trust our gut, and not be like ‘well on paper we need to have a four-song EP.’ It was freeing creatively as well. I like ‘Come With Me’ so much because as far as the percussion in that song, he has congas in his house, so I was playing on them, and I brought a glass bottle from Target, and he was like ‘Oh, I’m gonna play that.’ We had fun! It was a cool experiment and the project turned out to be really nice.”

Nu-Ra: “When I got into this space here, this is an extension of my house, so we built a studio and I put the stuff here, and ‘NRT’ was one of the first things that came to em once I got into this new space. Hetepsa came over one day and I let her hear it and she was like ‘wow, I really like this! Let’s build on this.’ Because it was really just a skeleton of an idea, just me messing around with autotune. Initially we had a Jermaine Jackson sample, but we ain’t clearing a Jermaine Jackson sample. But I was super inspired by it. I’m just inspired by rhythm, I’d been listening to a lot fo funk music at the time, and NRT spawned ‘LILAH’ and ‘Come with Me’ [the other songs on If We Had A Pool]. W just allowed ourselves to be as creative as possible.”