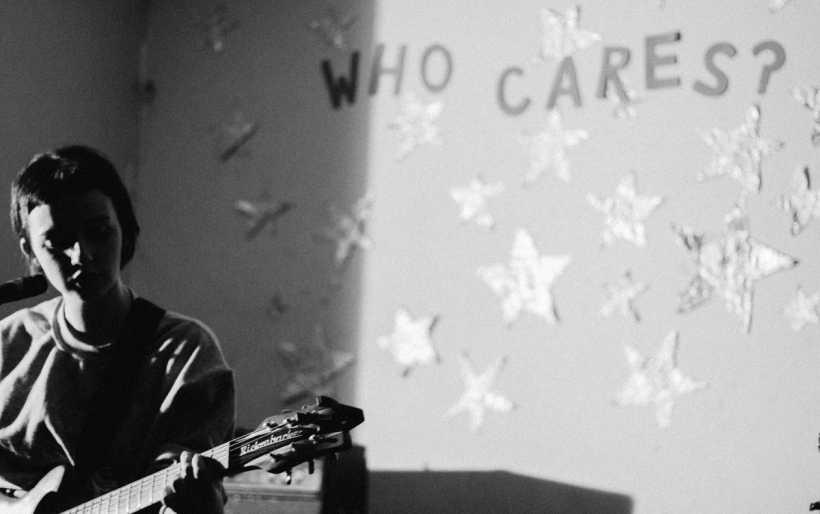 Philadelphia singer and songwriter Mary Allen emerged on the scene about five years ago, quieting house show crowds down to a whisper with emotive sets and releasing stirring home-recorded albums under the name tombo crush.

After taking a hiatus for a couple years, Allen revived the project in 2019 with a couple EP releases, and returned this spring with tombo crush’s third full-length. The album tombo crush was released on March 14th , just as the Coronavirus pandemic escalated our collective levels of anxiety.

For those who were in the know and have been able to spend the past *checks notes* 41 homebound days with this album readily accessible, it must have been a source of solace. It can still have that effect for those who arrived later, though. Allen sings of pain but also acceptance, of trauma but also resolution, of finding a way through the trials life places in our way, and they do so with pure empathy.

Sonically, tombo crush is Allen’s most rock-oriented work, the emphatic “absence” mourning distance and separation with backing vocals from Kississippi’s Zoe Reynolds: “absence makes the heart grow fonder / but I can’t take your absence any longer.” The electric guitars crunch as the bass and drums groove with a fervent energy. By comparison, “1 a.m.” is as quiet as its title implies, where Allen’s lyrics detail a drink in their hand and a person on their mind; it’s short and simple, raw and real.

The urgent energy of “abhor” reminds me of Snail Mail and early Waxahatchee as Allen paints a picture at the moment of dissolution with remarkable clarity: “it will never be easy / I can’t make you happy / our arms will never meet again / maybe this is for the best.” Again, striking songs are paired in complimentary ways, and “gaze aversion” makes space for a hopeful sentiment amid insecurity: “I hope you’re never a stranger to me / I’m just happy to be next to you.”

In the final act, we arrive at the most intense experiences of this song cycle, with lyrics making allusions to death and the remorse of the living. On the album’s third minimal guitar vignette, “fingernails,” Allen sings of regret that they “couldn’t pick up the phone a few more times / now you’re above me thinking less of me.” It concludes on the swelling instrumental energy of “bad song,” which juxtaposes a viscerally angry sentiment with an empowering melody: “did you think that i was not worthy of decency to my brain and my body,” Allen repeats, and as much as those words are filled with scorn, they come from a place of strength.

Listen to tombo crush below, and order a cassette of the record via local label Small Grey Tapes.