Checking In With... Birdie Busch - WXPN | Vinyl At Heart 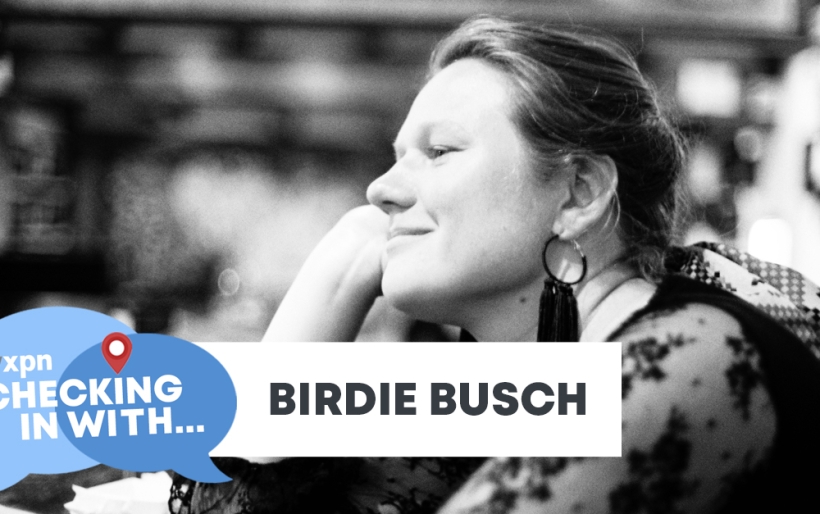 Birdie Busch | photo by Todd Erk | courtesy of the artist

Checking In With… Birdie Busch

In times of crisis, it’s more important than ever to check in on your friends and loved ones. Here at XPN, we’re Checking In With our extended musical family to see how they’re holding up during the Coronavirus quarantine…and what music has kept them grounded. Today, John Vettese chats with Birdie Busch.

Singer-songwriter Birdie Busch was sitting in her Germantown backyard when we caught up with her for Checking In; it was a sunny day, and you could hear the breeze blowing through the trees and neighborhood traffic off in the distance.

“I’m spending a lot of time in the homestead,” she says. “And as far as music, just writing a lot and recording. I’m fortunate enough that we record in a space that we put together in our home, so we can do pretty full production recordings. We even have an upright old piano, so we can record a lot of instruments in our place. The newest instrument we were gifted was a slightly broken accordion.”

In our wide-ranging conversation, Busch chatted about long-distance production projects with her old bandmate Devin Greenwood, who runs The Honey Jar studio in Brooklyn — “it’s nice to remotely continue to work with people we’ve worked with in the past,” she says — and also told us about the Sunday afternoon concert series she’s been doing on Instagram Live, which she launched as a vehicle for playing children-friendly songs for fans who have young family members quarantining with them. It was a success, and it led to Busch deciding to come back every Sunday, the same time, with sets that aren’t as specifically kid-oriented.

“I kind of made that promise to myself and everyone else,” she says. “I have a lot of songs, I have a lot of records — I have a lot of songs that aren’t on record — and I was like… you know how some people are actively sorting through their closets and their basement? This is my practice in going through my catalog and really thinking about all the songs and sharing them. And it became this centering piece in my ‘week’ — our weeks have become kind of decimated in some ways — and it’s been really cool.”

She also sees the possibilities in using the medium as a way of facilitating connection while we’re all separate.

“We aren’t able to collectively get together and converse,” she says. “This is our collective conversation right now, with a soundtrack. There’s a lot about it that I’ve come to really like that I haven’t thought of before. It’s really sweet to see someone socializing at the bottom of the screen, the way they would socialize at a show. ‘Hey, Rachel!’ To someone who lives on the west coast. ‘What’s up?’ We’re all here together.”

We also talk about her upcoming Instagram concert this Friday with Jesse Hale Moore to benefit Kidz Meals on Wheels — a local organziation currently organizing and packing box meals for students at Attic Brewing Company in Germantown. She tells us about her involvement in the Fuel The Fight benefit comp as well, and her earnest love of songs plural. Hear a few of those and our conversation in the player below.

Checking In With Birdie Busch

Favorite Song of All Time: “Sleep Walk” by Santo & Johnny

“When you asked, I mean, I flat out refused [to give a single favorite]. I was like ‘no, this is not happening.’ I’m a musician. The whole reason I’m a musician is because I love songs plural. So to find one, and also to kind of have people almost inadvertently define you by this one I choose, is something I’ve always tried to slip out of and avoid. Because, man, there isn’t one. And in addition to playing music,I also DJ and have a big record collection, I am a song lover, of many different songs that all have songs that have times and places. But if you want to talk songs, we can talk songs. I thought it would be interesting to choose a favorite song of mine that was wordless. I think a lot of times people, when they hear that, especially coming from someone who loves writing songs, they think I’m going to choose something lyrically as well as musically, so it seems like a little bit of a curveball to pick one that was wordless. I’m a huge fan of that era of super revered desert mellow rockabilly music, that desert drive kind of vibe. Ever since I was younger, the melody of that song is so undeniably gorgeous the minute it comes in and the minute it leaves. And it’s so emotive, that song, the melody alone is so transporting, it has such a powerful hold on me. And since you said favorite song, that one always just pops into my head. ‘Oh, “Sleep Walk,” when is there a time when I don’t want to hear the song “Sleep Walk?”’ I don’t think there’s ever a time when I don’t want to hear that song.”

Song that Raises Your Spirits: “Do It Nice” by The Wailers

“I am a huge fanatic of reggae in general, but especially early 60s 45s reggae. I don’t know where I heard this before, but someone was telling me that the music you listen to around 17 and 18 years of age is some of the most visceral pieces of music that you’ll carry with you through time. I at that time was working on the Jersey shore, delivering pizzas, driving around with my friends for the first time with licenses, and listening to cassettes in the car. And I had a lot of cassettes of a lot of this early era Wailers stuff. It just got fixed into my spirit from then on, and now when I really need to move through stuck energy kind of places and deep winter, things like that, I always put that stuff on. It’s a really joyous place for me to tap into. There’s so many songs from that catalog and era, but ‘Do It Nice’ was always aa personal favorite, just the turn of phrase — ‘It’s so nice, I like to do the same thing twice…’ Love it! So I chose that one. A lot of that early Wailers stuff, because of those cassette tapes from those summers, those songs can can come on — early Toots and the Maytals as well —those songs can come on and I can sing every little inflection, turn it inside out, put it on its head, every single thing, I so viscerally know because I listened to it so much and it resides in a place of joy for me. Same thing, I was surprised…you know when you don’t revisit something for quite some time and then it comes on the stereo somewhere, or the radio, and you’re almost taken aback by how much you remember about every little part of the song? Early Beastie Boys is like that for me. I’m just like ‘How do i remember every single word of these songs on Paul’s Boutique? What is happening?’ I find that to be true with early Tribe Called Quest, certain 90s era hip-hop, it’s just burned in my brain.”

Song You’re Most Proud of Working On: “Anchor and Sail” by Birdie Busch

“Local musician Madalean Gauze reached out to a lot of people via email saying she was wanting to put this together, and if you’re interesting in submitting a song to be a part of it, this is the deadline. What’s cool is she really didn’t let anyone know who else was submitting and kept it very anonymous until everyone sent their songs in and she was putting together the promo to release on May 1st. I think originally she was thinking it would be like 15 to 20 songs and it turns out that over 60 artists submitted,  which is really cool as a listener, because somebody could buy this comp to support the charitable effort, and all of a sudden it’s not just a compilation, it’s like a huge Spotify playlist of like 60 songs, this is going to be something people can really dig into for really sitting down for a couple hours and taking it in. I’ve been really enjoying it on headphones, walking around the neighborhood solo. She really left it open for people could submit really anything they wanted to. But we — meaning Todd Erk and I — we felt really strongly that we wanted it to be something we hadn’t recorded before and felt in the spirit and relevant to the time we were going through. We recorded this tune ‘Anchor and Sail’ and we tried to move through it without…we obviously had a deadline looming, and we went into it without overanalzying it too much or being too meticulous, and we really were happy with haw it turned out, and happy to be part of it with everyone else. It’s cool cause I’ve heard music off of it that I really liked and now I’ve connected with further catalogs with just the compilation as the jumping off point.”