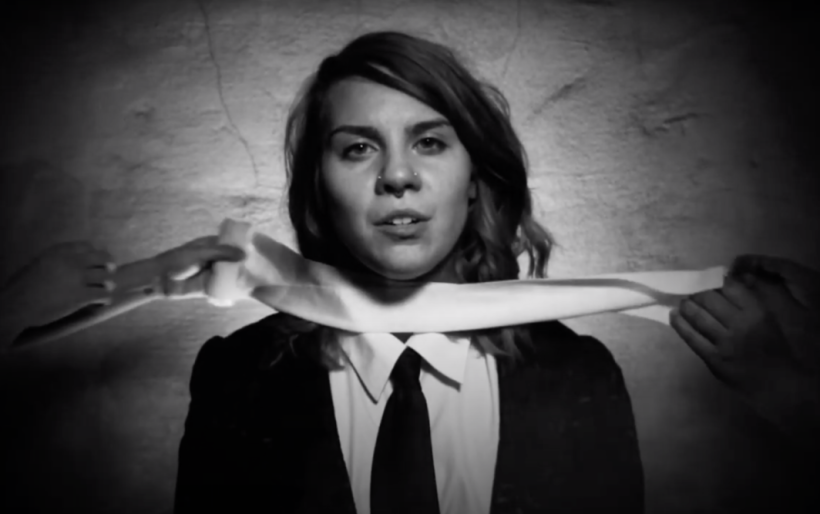 Philly-based experimental rock band Ellen Siberian Tiger debuted their new single on Friday, and it’s a swirling torrent of guitars and vocals that explores queer longing and the fight to be heard.

The latest from Cinderblock Cindy, the new LP that Ellen Siberian Tiger plans to release in July, “If A Tree Falls In The Forest” is about “how the world doesn’t always seem to have a space for queer people, leaving them to carve out spaces for themselves, often silencing and ignoring their voices,” according to a press release.

A beautifully-shot black and white video by filmmaking team Michelle Goodwin and Gracie Martin gives this a very literal depiction as frontperson Ellen Tiberio Shultz sings from the center of the frame while two pairs of hands wrap their head in tightly-wound gauze, subsuming a strong identity in anonymous banality.

According to Tiberio Shultz, the album as a whole looks deeply at these themes of gender and power dynamics:

Existing in the patriarchy without benefiting from it feels…like I’m under scrutiny, like people are looking at me and measuring me against what they think I should be and in the process rendering me a passive thing to be judged. So I tried to write about who I am without those expectations.

Cinderblock Cindy will be self-released on July 24th and was recorded by Matt Poirier at Miner Street Studio. In addition to bandmates Tiberio Shultz on guitar and lead vocals, Collin Dennen on bass and synth, and Richard Straube on drums, it features contributions from Catherine Park, Joel Sephy Gleiser and Nicole Pompei. Watch the “If A Tree Falls In The Forest” video below.