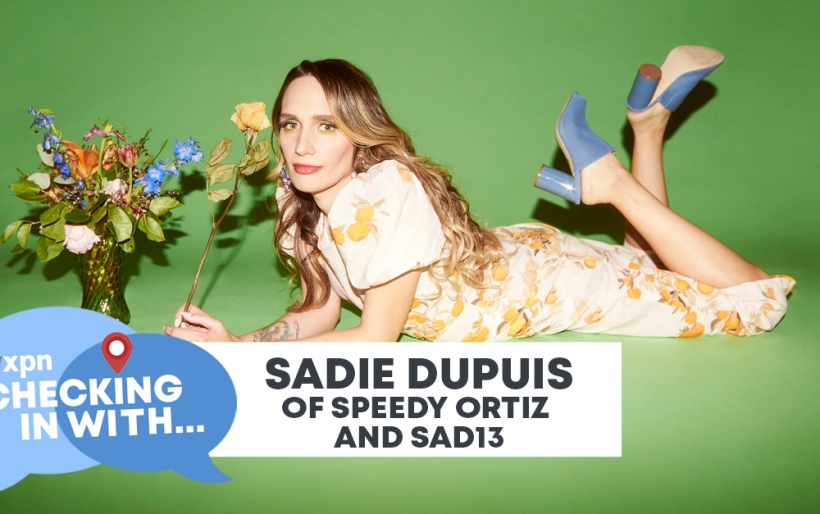 Sadie Dupuis | photo by Natalie Piserchio | courtesy of the artist

Checking In With… Sadie Dupuis of Speedy Ortiz and Sad13

In times of crisis, it’s more important than ever to check in on your friends and loved ones. Here at XPN, we’re Checking In With our extended musical family to see how they’re holding up during the Coronavirus quarantine…and what music has kept them grounded. Today, Rachel Del Sordo chats with Sadie Dupuis from Speedy Ortiz and Sad13.

“I’ve been about as totally fine as one could hope for,” said Sadie Dupuis when we caught up with her over the phone for a Checking In chat. “It’s a strange time for all of us. Some days I’m pretty productive, other days I’m like ‘what could we possibly do to move forward with the world like this?’ But I think, all things considered, my immediate family is healthy and I’m doing okay.”

The singer, songwriter, guitarist and producer of Speedy Ortiz and Sad13 has kept very busy since the spread of the COVID-19 pandemic. She’s been a very active spokesperson advocating for UMAW, the Union of Musicians and Allied Workers, which organized as people across the music industry lost their source of income during the quarantine and its ban on concerts and other public gatherings.

“Our main action has been this open letter that was delivered to congress, that we got 1000 musician signatures on, stating our main demands in protecting musicians and all workers in the wake of COVID, and closures, and most of us losing our employment,” she says. Dupuis says UMAW is seeking Congress’ help in extending unemployment benefits, legislating rent and mortgage stoppages, medicare for all, and financial support U.S. Postal Service “which is the only way any of us can afford to send our records and merch out with an affordable rate.”

We also talked about why she’s been using her livestream-era performances to read her poetry instead of play her music, we find out a bit about the new Sad13 project and single, and we talk about a couple of her favorite songs of all time. Hear it all in the player below.

Checking In With Sadie Dupuis of Speedy Ortiz and Sad13

Favorite Song of All Time: “Another Nail In My Heart” by Squeeze

“Squeeze is just one of my favorite bands ever, and [on this song] there’s such great interplay between the synths, the guitar line, awesome lyrics. It’s a really fun song. One of the last things I got to do toward the end of February was I got to play in an all-star benefit revue in Boston, and I got to cover this song. Ted Leo was part of it, it was sort of an all-start ban with Letters to Cleo members too. I learned the guitar solo for it, and when I said I wanted to do this song, I hadn’t really thought about how fast the guitar solo is. It’s notoriously known as one of the more difficult guitar solos in such a short period time. So it was really fun to play. I definitely got a little tendonitis practicing it, but it’s one of my favorite songs.”

Song that Raises Your Spirits: “Disparate Youth” by Santigold

“When we got on the phone, I was like ‘I have my ups and downs, but I’m doing okay.’ But there are definitely days when I’m feeling the despair. I walk around my apartment like ‘is there any music in the entire world that will cheer me up?’ And the answer has generally been Santigold. I really love all her albums. This song in particular, when the guitar comes in, it’s Nick Zinner form Yeah Yeah Yeahs, and it just feels so good! It’s a great song, great arrangement, great recording. I love all her work and it’s definitely helping me improve my mood. Going to a local business would be a thing I’d do to cheer up in the past, but now it’s listening to Santigold.”

“I haven’t had a new Sad13 song out in a little over three years. This song and the last one came out through the Adult Swim Singles series. Sad13 is my other band that’s not Speedy Ortiz, it’s the one where I produce the project and play pretty much all the instruments. On this song I have Zoe Bretcher playing drums and Audrey Zee Whitesides playing bass, another Philly Local. I had the one Sad13 album and went and toured on it a bunch, and then Speedy had an album out and I went and toured on it a bunch, and I had a book out and I went and toured on it a bunch, and for reasons like that I hadn’t written a song in almost two years. And this is the first one I finished for a project yet to be announced. I play an electric sitar on it, that was kinda of fun, I played a cowbell all kinds of fun stuff. I’m excited to have some new music out, it was great to work on, Erin Tonken engineered it, she’s an amazing producer who has worked with Esperanza Spalding and David Bowie and other geniuses.”