Coronadome: Why was Pat Finnerty covering ELO with members of Dr. Dog and Buried Beds on a West Philly roof this week? - WXPN 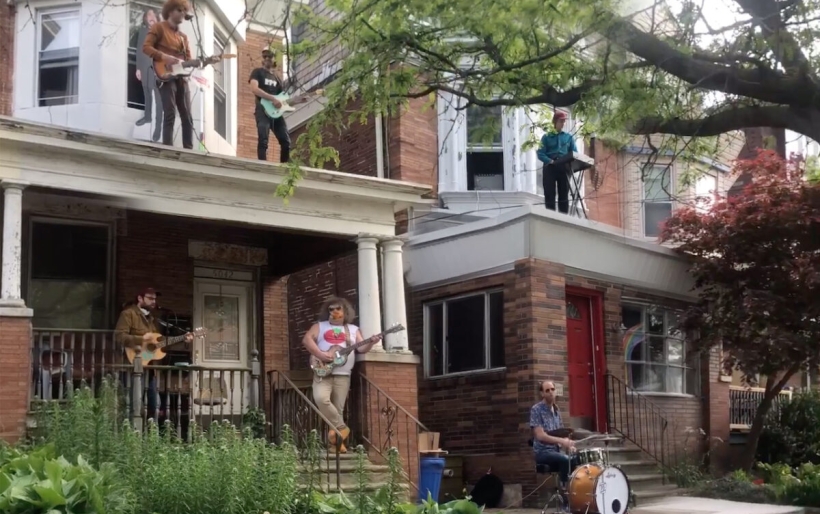 Coronadome: Why was Pat Finnerty covering ELO with members of Dr. Dog and Buried Beds on a West Philly roof this week?

There are West Philly house concerts, and then there are concerts on top of West Philly houses. And for a couple dozen folks watching a band cover ELO’s classic “Don’t Bring Me Down” this Thursday afternoon on a block in the Spruce Hill neighborhood — and tens of thousands more who have seen the video online in the past 24 hours — this particular house concert was something magical.

The band in question is led by Pat Finnerty, who plays in Son Little and (for some, more notably) ran incredibly fun live band karaoke nights at Johnny Brenda’s in the pre-quar era. Joining him were his regular collaborators Patrick Berkery on drums, Justin Mazer on guitar, Brian Langan on bass, with Dr. Dog’s Zach Miller joining on keys and Brandon Beaver of mewithoutYou and Buried Beds on guitar. Though Langan is the only person we see full-on wearing a mask (Beaver, a backing vocalist, does the chin mask thing in the video), everybody is performing spaced amply apart, and short of one audience member we see in a lawn chair, the sidewalk crowd appears to be mostly watching from inside cars, on porches, and other remote spaces.

The video was shot and shared on Facebook by Marley McNamara of JBs, who wrote “this is the first live show I’ve seen in MONTHS and it was glorious.” We caught up with Finnerty over email to find out how this mini-gig came together.

The Key: First and foremost – we should note that pretty much everybody playing lives together in these two houses, right? So you were abiding by social distancing while still playing a gig. How did the idea develop to combine houses and make a split mega-stage?

Pat Finnerty: Yeah, I live in a house with two band members.  Zach lives next door.  Brandon lives in the same neighborhood and stayed masked up and 6 feet away.  Pat Berkery is out in the burbs but we still made sure to keep him out on the sidewalk.  Everybody stayed the hell away from everybody.

TK: You really had a gorgeous day to do this. Was this an idea you and the other musicians were saving for a nice-weather day, or was it more spontaneous?

PF: I’ve been doing ELO Thursdays this month [on Instagram] and sang “Do Ya” in the middle of the street last week.  I originally planned to just have Pat Berkery come and set up his drums on the sidewalk so that I could record him playing “Don’t Bring Me Down” from the 3rd floor, but then the idea of playing live popped in and I saw a way that we could pull it off safely.  Everybody was down and it all happened in matter of an afternoon.  I told them to have “Don’t Let Me Down” ready in case we were able to get away with another song.  Worked on a bunch of levels because the name, the rooftop reference, and the world needs The Beatles now more than ever.  We played “Breakdown” because Pat Berkery started playing it on drums and we said “Fuck it, let’s play ‘Breakdown.'”

TK: How did your experience doing live band karaoke help out?

PF: Playing with dudes that are real good makes it easy. I’ve been calling tunes out to bands my entire life, but this was the first time I had to find a drummer through tree branches.  If this thing doesn’t wrap up soon I’m gonna put binoculars on my pedalboard.  That might be the first time I’ve ever typed “binoculars.”  Binoculars are real ’80s too.

TK: Some of the people playing are also members of Dr. Dog, mewithoutYou and Buried Beds…are they folks who normally jam with the full band, or were they special sit-ins for this show?

PF: The rest of the guys have been members of the ever-expanding Full Band, but I think it was Brandon’s first time.

TK: You do a performance every day at 5 on IG. Can we expect more of these full band oriented pop-ups, or is it something different every day?

PF: I’m still going to keep the format of recording songs in one hour with guest singers alongside talent shows and contests, but am certainly going to do the full band again because I miss giggin’ so much and I think the world needs to hear a band rip.  I’m going to keep it spontaneous, because I don’t want to gather any sort of crowd for obvious reasons. I knew that it was going to work but I had no idea it would sound that good.  Our houses kind of make the perfect Coronadome. Take that, Red Rocks.

Follow Pat Finnerty on Instagram at @The_pat_finnerty_show for more, and watch the video for his latest single “Tough Gig” below, along with more footage from the pop-up.