Listen to Jake Blount talk collaboration, activism, and more in his live set on the XPN Folk Show - WXPN | Vinyl At Heart 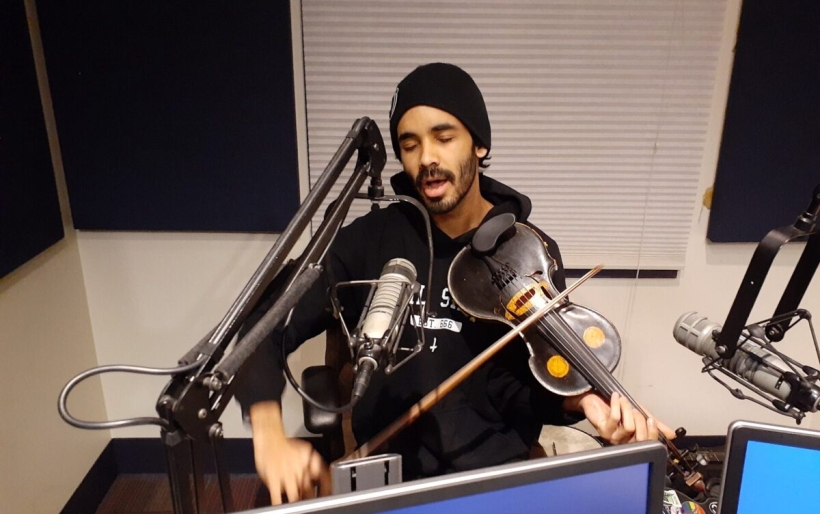 Listen to Jake Blount talk collaboration, activism, and more in his live set on the XPN Folk Show

Washington, D.C. fiddle player and songwriter Jake Blount released his latest album, Spider Tales, this past Friday on Free Dirt Records to critical acclaim from outlets like NPR Music and The Guardian in the UK, who named it the best folk album of the month.

Back in February, Blount paid XPN studios a visit while he was in town accompanying an MFA dance recital at Temple by Matthew Olwell, a friend he connected with at the Augusta Heritage Center

“I’m in a period of life where I say yes to a lot of different things,” said Blount, who also plays in the duo Tui, and has collaborated with musicians across the greater folk universe like Philadelphia’s Cameron DeWhitt. “I’m the type of person who gets deeply immersed enough in what he’s doing that I run the risk of blinkering my view of the possibilities.”

Blount opens his Folk Show set with a cover of “Tangle Eye Blues,” a favorite from the Alan Lomax archives recorded in the Lambert Camp at the Mississippi State Penitentiary, performed by a prisoner known only as Tangle Eye. Later, the set leads into “Beyond This Wall,” an instrumental written by Judy Hyman of The Horseflies and named by her husband Jeff Claus after a phrase he saw in an old photo of the entrance to the Salaspils concentration camp.

“Walls are at the forefront of social and political discourse in our country, for a lot of the same reasons,” Blount said. “And it’s important to remember all the walls that have been built before and the fate that befell all of them.”

We also talked about how current events affect his songwriting, and how activist spaces informed worldview and music.

“I have been involved in activism in the LGBTQ community since I was in high school,” says Blount. “And I’ve been reflecting a lot on those years, and how many friends just died, and how many people I was working with just died. It’s a battle of attrition in every possible way working in that sphere. So many of these songs revolve around grief, loss, being disempowered and disenfranchised.”

Listen to his performance and interview on the XPN Folk Show below and check out a stream of Spider Tales, available now.