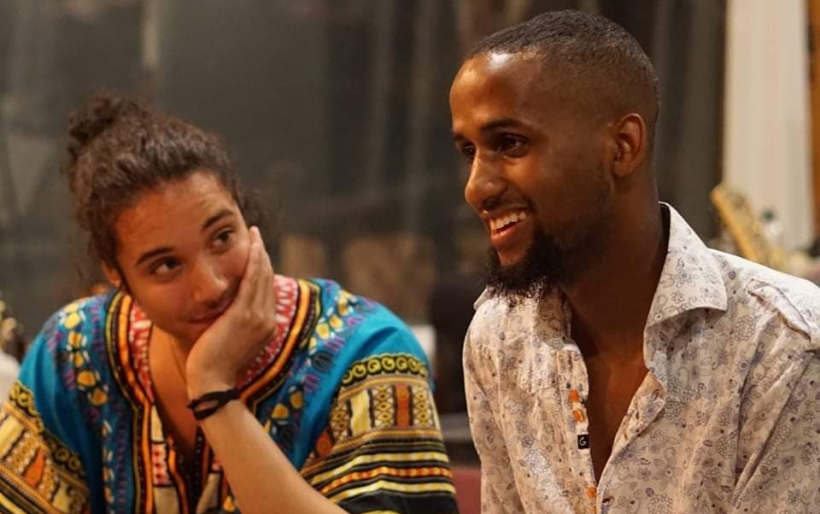 Damien-Graves | photo courtesy of the artist

Last week, amid uproar in the streets of Philadelphia, Damien-Graves released a chilling and deeply honest debut single. “Being a Black Man in America” is a dauntless first statement from the young group, led by trumpeter Jamal Damien, 21, and pianist Micah Graves, 22.

On this stunning new track, the band — with drumming by Maya Stepansky, bass work by Nathan Pence, and spoken-word vocals by Vince Anthony — fuses confident R&B chic with raw poetry and fiery instrumental interplay. The musicians demonstrate their grounding in traditional approaches to jazz improvisation in the quartet format, but they’re also unafraid to approach the experimental, hip hop-infused territory that’s been developed by contemporary giants like Ambrose Akinmusire and Christian Scott aTunde Adjuah. The group shows terrific promise, and later this summer they plan to release a debut album, which they recorded at South Philadelphia’s Turtle Studios last year with producer Jay Levin.

Graves and Damien both grew up playing jazz in the Philadelphia area, and they’re currently studying in the jazz programs at Temple University and Eastman School of Music, respectively. When they started collaborating in April 2019, Graves explains, “we wanted to share our feelings and our music on what it feels like to be a black man living in a white norm, especially in a university.” Damien, who wrote the lyrics for this track, drew inspiration “from my own experiences as well as the experiences of my peers and the history around systemic racism and black oppression.”

Graves conceived his musical composition as a response to Damien’s poetry, and the band brings the whole project to life with exhilarating purpose. Together, the four instrumentalists traverse an array of different time signatures and key centers, all underpinned by precise rhythmic patterns in the drums, bass, and keys, interlocking like threads in a resilient fabric. Anthony’s voice and Damien’s trumpet sound like dual protagonists, in turns feeding on and fighting against the roar of the rhythm section. Damien’s pointed lyrics describe social isolation, alienation, being inundated with noise, and struggling to hold onto a sense of self as a Black American — “The expectation that I’m something someone wants me to be. Assumptions, fears, stereotypes, of what people choose to see.” This record, like the thousands upon thousands of Americans who have taken to the streets this week, reminds us that “self-expression is something no one can take away.”

Graves says the COVID-19 outbreak has slowed down the process for releasing Damien-Graves’ debut album, but they remain committed to their music and their message. “At the time being, we are marching with the protests, demanding justice to be served.” Last weekend, Graves also played keyboard at the Rally for Black Artists on the steps of the Philadelphia Museum of Art, along with Philly jazz luminaries Cedric Napoleon, Donovan Pope and Hiruy Tirfe.