Black Art Matters: How to make your support sustainable, not symbolic - WXPN 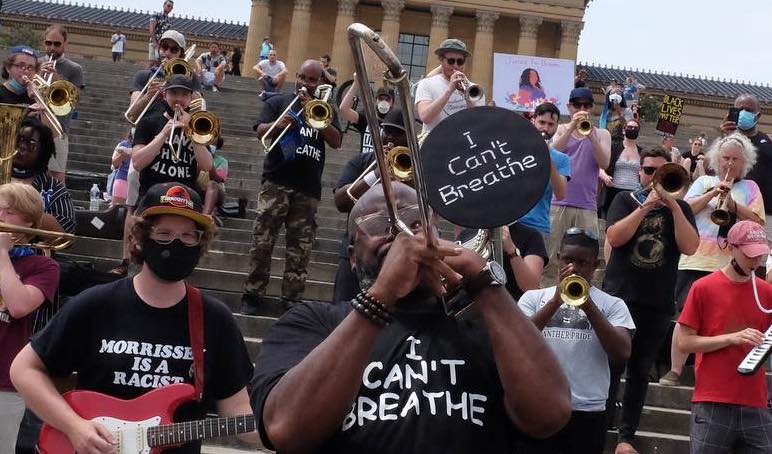 A Clarion Call For Justice | photo by John Vettese

Black Art Matters: How to make your support sustainable, not symbolic

Confession: I’ve never seen the video of George Floyd being murdered by Minneapolis police officers. I’ve never watched Eric Garner taking his last breath or Mike Brown being shot or Korryn Gaines in a standoff with police, and can gather that thousands, millions of other Black people have not either. I, we, live that life daily, ingrained and implanted, suffocating and immersive — it’s beyond systemic racism, beyond micro-agressions, beyond anything that can be described in academic terms. Racism is just there; consciously, unconsciously, palpable, undignified and noble — it’s cross burnings, it’s cabs not stopping for me, it’s being overlooked by magazines, art institutes, people putting together punk shows.

Even those of us who ignore it, through strength of will or cognitive disassociation or deniability, it’s inescapable. In the middle of writing this, I read about a vigil for Elijah Mcclain being disrupted by a riot police squad, I read testimonies from friends on Facebook about times they’d been harassed by cops — led into back rooms, fondled, stuff dumped onto the ground; these frisks aren’t just a quick pat down. It is with this understanding that relationships between white folks — presumably good people who want to be allies — and Black people must be forged; it feels like a really high price to pay just to talk to someone who shares a mutual admiration for Bad Brains, but this is the reality, the level of understanding and trust that must go into interracial relationships going forward. Our survival depends on it.

In the wake of these murders, an uprising has happened. No, they aren’t peaceful protests, they aren’t looting, they aren’t marches — all of those actions are a part of a larger movement, they’re moments in time that represent nothing short of a paradigm shift. Millions of people are demanding massive, zeitgeist level changes in policy, economics, and against institutional racism. Millions more are waking up to baseline ideas that many of us have talked about for ages — reparations, defunding police, gate-keeping institutions, military industrial complex, or even the fact that yes, racism does “still exist.” And on some level, all of these people are asking questions about how to help, where to go from here, what to do. Ultimately, with this essay, I don’t wish to show you, the reader, what to do on the political front. The information is out there and, if you found this article, you can find all that — the phone trees, the petitions, the police departments to call, the books and articles and pamphlets to read, where the rallies are, where to donate, etc. But what about our community here, in music?

There have been strong concerted efforts, many of them quite commendable, to funnel money into Black causes from the underground music community. As an artist, I’ve participated in three compilations that have given money to groups such as Amistad Law Project and Morris Home. A nagging irony though is that, as a Black artist, I’m being asked to participate in a benefit for Black lives, while my own Black life hangs in the balance. The requests have all been genuine; the promoters dig my band’s music and support my voice, as well they all made an effort to make sure that their compilations aren’t just a bunch of white guys with guitars, and all of that matters. However, in a world where equity for Black people, Black artists in this case, doesn’t exist, asking Black folks to perform labor for white audiences — regardless of the cause it benefits, and perhaps especially if it benefits Black life directly– doesn’t work. It feels like a conundrum, but with some creativity and transparency, it doesn’t have to be. I’ve compiled a list of questions you can ask, ideas you can contemplate and strategy that we can implement in the artistic liberation of our spaces and in further solidarity with Black artists and musicians.

1. Will you sustain the practice of supporting Black music and art or go back to nearly exclusively white content once the uprisings are seen as being “over”?

It’s extremely on trend for everyone, from fashion labels to magazines to music venues to post the black squares in solidarity with BLM or for promoters and publishers to seek out Black art as there is more social capital to gain from supporting us. What happens after this uprising?

2. Will you make a statement saying you recognize anti-Blackness in your past publishing and promotions?

It’s important to any movement that looks towards social progress to be aware and transparent about its past. Are you willing to sacrifice a bit of social capital in order to admit that you fucked up in the past? Those all-white writers rooms and venue staffs look real dumb right now, don’t they? It needs to be pointed out that a lot of you were complicit in this in order to reconcile.

3. What Black creators do you already know? Why aren’t you reaching out to them?

Posting calls for Black artists, musicians and writers to participate in something sounds like a good tactic on one hand, but it highlights a glaring problem: that you, as a promoter or publisher or gate-keeper, don’t know any Black artists. If you had, all along, Black people in your sphere of writers, artists and musicians, if you had actively sought them out, you’d already know how to best allocate resources. And those that you did know could point you in the direction of other artists, and so-on. While it may be necessary now for you to make such a call (though I’d even advise you going through old emails and past submissions and investing in Black artists that you turned down), it would be more transparent if this call came with an understanding that in the past, you weren’t as diverse as you assumed, and that your efforts to be inclusive will be real and sustainable.

4. Please don’t turn your solicitations into a “crabs in a barrel” war.

Leave space for every Black voice you encounter and not just ones that conveniently fit your narrative. Black artists deserve their voices heard, and deserve to not have to compete with each other for token spots. Recently someone shared with me a post that some white ally with resources made for Black writers. “In order to uplift BIPOC writers…I want to pay for the application/submission fees for contests, fellowships, prizes, grants for BIPOC”. The post went on to say they’d reimburse folks until a total amount of $2k was reached, and that those who wish to participate should DM the white ally a screenshot of the application. This is difficult to unpack because people want to be congratulated for charitable acts, but this isn’t a good tactic. Not all writers submit to institutional “prizes”, the competition is intimidating especially for Black writers. Not all Black writers are, at this very time, submitting to things — some of us are in the process of writing and have other needs: food, rent, transport, or even entertainment. And limiting who has access to these funds creates a situation where the ally has pit BIPOC folks against one another. To say nothing of the fact that some of us don’t have the money to begin with to, in fact, be reimbursed later. There are other issues here, but for brevity’s sake these are the main ones. What should have happened here? This ally could have: scoured Instagram for Black writers and donated money to them, period. They could have made this call, but not restricted it to those applying for grants or submitting (and forcing them to send you a receipt no less!). I’m sure the endorphin rush of having Black folks by the score DM this person must have been massive, but it’s performative, despite the intentions. Give Black artists money or set up a fund that can be directly pooled from, and without conditions.

5. Do the work yourself.

Don’t just post the solicitations. Go out and find these artists and writers. Black people do it all the time; we wear Google out trying to find Black artists to collaborate with, listen to, observe, read and uplift. Why can’t you, as a white ally opening up to the possibility of finally working with us, do the same? Be deliberate and determined to find our work. Use our hashtags! Meet us where we are. The onus is on you to change.

6. Pay us, and pay us well, and in every aspect of your search.

It’s labor you’re asking of us, so pay us. Even with benefit shows and compilations, pay your Black artists a small stipend from the funds raised. And don’t use this as an excuse not to include our work on your compilations, because that is defeatist. Please be mindful that bands with Black members in them, or artists and writers who are Black, face a different set of social, political and economic circumstances than artists who are white. Certainly, Black artists do events and make music with charitable intents; but asking for Black labor (to, ironically, benefit Black lives) assumes that the Black artists you’re asking to do the work aren’t experiencing trauma and displacement and the effects of racism. We are.

This is just a start. More can, and should, be said. More ideas can, and should, come to the forefront. As well, this piece isn’t meant to upset any sincere efforts of solidarity or to shoot down people trying to make a difference. This is meant as a rallying call, a primer for continued justice work. It may feel sharp, it may not be smoothed down for you to digest, throw on a smile and then pat your white self on the back and move on, but that’s the point — for all of my 44 years, 25 of those spent in the DIY music community, I’ve never been given the privilege of absorbing this information in dosable bits, or of having the impact of anti-Blackness softened. You’re reading an article and can stop any time; if you don’t stop, if you keep working, if you keep asking questions and keep listening to and supporting Black people and Black arts movements, you could actually change the world. Writing and researching this, I had to pause this and ask my husband to hold me for a second, to ask him to help guide me through a moment of terror. I don’t want to watch anymore videos of Black people dying, and I don’t want to be in one. Think of these steps, this piece, as tools for continued work and impetus to implement a shift in the paradigm. Just think: you could change the world.