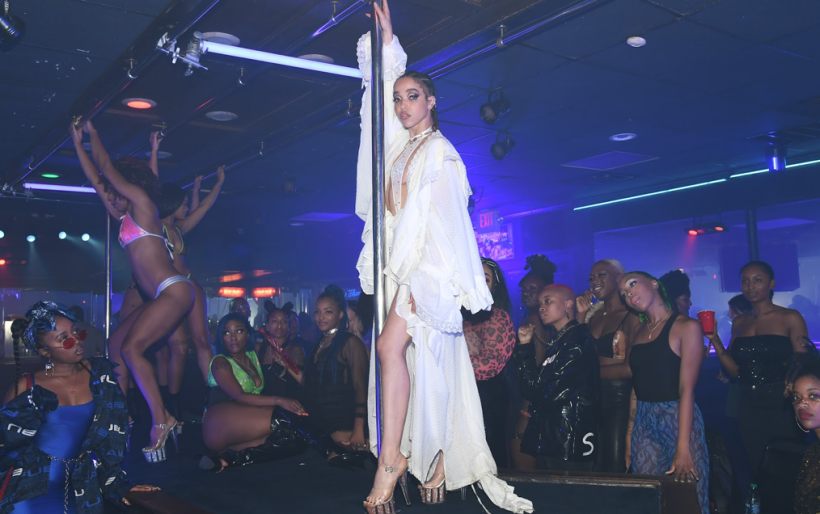 FKA twigs’ music and live performances have always centered around womanhood. Every project she has released has subverted predominately masculine narratives of love, sex, and pain, instead highlighting the power of femininity. Her most recent project, a short film created in collaboration with WePresent called We Are The Womxn, continues this narrative. Centering around twigs’ performance at the 2019 Afropunk Festival in Atlanta, We AreThe Womxn documents twigs’ performance at Afropunk with Queen Afua, followed by her performance with dancers at Blue Flame (Atlanta’s first Black strip club).

“We are the womxn who light the darkness,” Queen Afua declares toward the beginning of the film. Hypnotically, the crowd attentively repeats these intentions. “We are the womxn. We are the universe.” Set against FKA twigs’ “Magdalene” (off her 2019 album of the same name), the film radiates with raw feminine energy. Interspersed with these ritualistic cries are shots from Afua and twigs’ moon dance: an ancient rite to celebrate the sacred feminine.

After the moon dance, the women travel to Blue Flame. “I decided to hold the second part of the all-female and femme sacred moon dance at Blue Flame, firstly to honor the heritage of pole dancing, but also to create a matriarchal dominance in a space that’s usually filled with, and run by, male energy,” twigs explains. “My experience at the Blue Flame solidified that, although historically womxn are often pitched against each other for their looks or their assets by the patriarchy, when left to our own devices we are incredibly nurturing and healing for each other.”

Below, watch We Are The Womxn, directed by Ivar Wigan. Read WePresent’s interview with FKA twigs and Queen Afua here. As part of the We Are The Womxn project, WePresent encourages donations to Lysistrataand SWARM, organizations who provide mutual care and support for sex workers in the US and UK.