The “Green Phase” may be on the horizon, but Philadelphia concert promoters remain skeptical about in-person concerts - WXPN | Vinyl At Heart 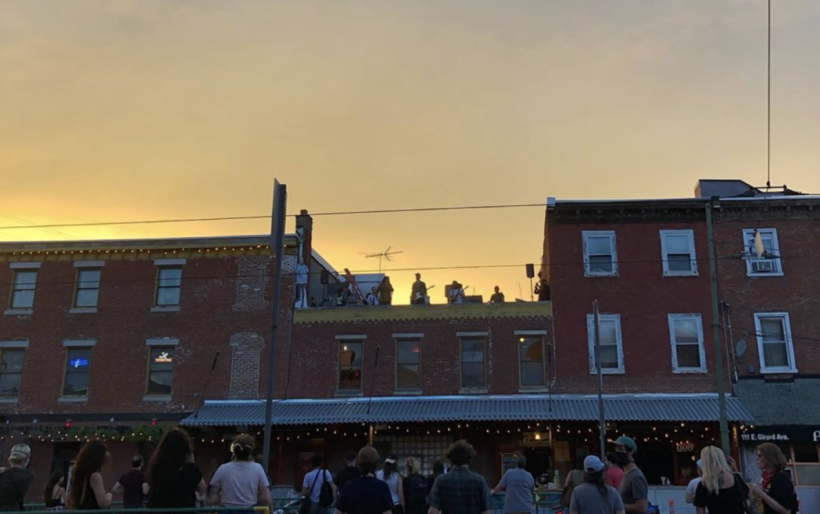 The “Green Phase” may be on the horizon, but Philadelphia concert promoters remain skeptical about in-person concerts

It’s twilight, June 25th, and Pat Finnerty and the Full Band are playing music off the roof of Johnny Brenda’s. Their audience is made up of passers-by, close friends, and neighbors watching from their balconies, upwards of 150 in attendance spilling onto the street. The band are wearing masks, standing six feet apart, and keeping their own instruments to themselves, despite the rotating cast of Philly musicians like Brian Williams, Nikki Starr, and a handful of members of Dr. Dog.

“Hey, we were talking during soundcheck, you said that utilities were included up there, right?” Finnerty calls to a woman on her balcony, who gives a thumbs-up, “But your landlord is taking you to the cleaners.” Another thumbs-up.

An unusual way to bring the Fishtown community together, but it cannot be emphasized enough how rare these occasions are under Coronavirus. Chatting about the performance later, Finnerty emphasizes that, even with plans for future pop-up concerts at Johnny Brenda’s, advertising ahead of time is irresponsible.

“What’s really, really most important right now, is we do not promote people going out right now. I’ve been asked so much ever since doing [this], will you come play here, will you come play there at this ticketed thing and do all this stuff. I don’t wanna be a poster boy for telling people, ‘Let’s go out and have fun!’ We’re not there.”

“I feel like the cool thing with Pat’s show is that it’s so spontaneous,” adds Marley McNamara, Assistant Talent Buyer at Johnny Brenda’s, “And on our end, too, just as also a bar and restaurant downstairs, our main concern, obviously, is just the safety precautions.”

Under current restrictions, venues are unable to hold shows as normal, forcing more creative solutions like this. The City of Philadelphia previously had scheduled their Green Phase to fully begin on Friday, July 3rd, but as case counts plateaued around 100 daily new cases, the date was tentatively pushed back to August. Earlier this week, the City had canceled all large public gatherings through February of 2021, including concerts, with the exception of those held on private performance venues. Even when concerts can continue, they will be restricted to 50 people in attendance.

Smaller venues, in the meantime, are suffering. According to a self-reported survey by NIVA (National Independent Venue Association — read more about the work they’re doing here), 90% of independent venues nationwide will have to close permanently within six months without a cash injection. Within three months, more than half will close. Even larger venues like The Fillmore, whose primary tenant Live Nation owes $24.5 million against the property, are faced with defaulting on their rent.

Some are finding ways to keep their heads above water. The Wilma Theatre plans to spend $150,000 to construct special-made box seats that hold 35-100 people in groups of one to four. R5 Productions and Union Transfer announced limited editionclothing to fundraise for the benefit of their venues and its workers. People’s Light in Malvern is hosting drive-in concerts, where concertgoers are given a “home space” within their parking lot to set up lawn chairs or sit on the hood of their vehicle.

“No one interacted. No one walked over to the other guy’s car to bum a smoke, or whatever. Everybody was super cool and understanding,” says Jesse Lundy, talent buyer and publicist for Point Entertainment, of the most recent drive-in performance with the band The Big Takeover, “And so we felt good about it, the [People’s Light] theatre people felt good about it, and frankly, the band and the audience felt good about it.”

Lundy talks about how, on June 27th, country musician Chase Rice received national backlash for staging an outdoor performance in Petros, Tennessee, with nearly a thousand people in attendance. Videos showed fans packed together in the outdoor venue, very few among them wearing masks.

“The reality is, the people who say that they are ‘over it’ and want life to return to normal have forgotten about science. When science tells me that the moral obligation is to not have people in groups, indoors, in an unsafe situation, and it’s a moral obligation at this point, then I’m not gonna do it,” he says.

“I wouldn’t do that to my audience.”

Lundy, like many, doesn’t believe that audiences are prepared to reconvene at indoor concerts even if that were legally sound. With the earliest projections for a vaccine in 2021, many will not feel comfortable gathering in large groups until the risk of infection is next-to-none. “I personally can’t see opening for shows until there’s absolutely no way anybody who comes to our show could be in danger,” says Mel Grinberg, owner and talent buyer of Home Outgrown Presents. Grinberg is skeptical of outdoor concerts, as well, when many outdoor spaces present issues of unexpected crowd sizes, and the extra work and money to turn public spaces into venues.

“Right now, Home Outgrown is coasting,” writes co-owner and promoter Alex Northrup in an e-mail, “Like a lot of indie / DIY promoters, we don’t operate our own venue and instead develop working relationships with trusted, like-minded spaces. Because of this, HOP is pretty lucky and can basically be out on pause with no operating costs during COVID-19.”

When venues are able to re-open, which remains strictly in the hypothetical, they will have to focus on local acts, as national tours will be on pause due to varying local restrictions and a fear of spreading contaminants state-to-state. Barrett Lindgren, Head Talent Buyer for Johnny Brenda’s in charge of booking national acts, is hesitant to return to work for this very reason:

“There are thousands of independent venues all around the country, all around the world that are booking these tours. And if a market drops out, if a market can’t be part of routing tours for safety concerns, that really drastically affects what kind of shows we can bring to Philly, and you know, how artists from here can tour. The whole thing is just so inter-connected.”

Across the board, the future of independent venues and promoters looks bleak, but many are holding out hope on a bail-out from the government and a vaccine in 2021. Until then, few can in good conscience even consider asking fans to turn out.

“That is the sort of thing that NIVA and a lot of organizations focused around this are sort of trying to wake people up to,” says Lindgren, ”is that we can’t really come back and be fully functional until this is done, until this is completely done. We were the first people to close, we’re gonna be the last ones to open.”