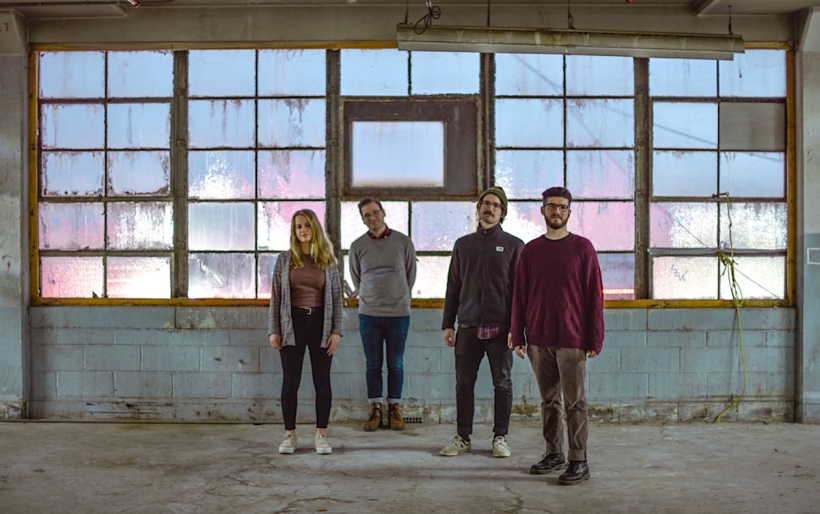 Buddie | photo by Ashley Cordoba | cobra.cam | courtesy of the artist

Songs of Experience: Buddie’s Dan Forrest on balancing heady metaphor with personal perspectives, and how the new Diving helped the band find itself

Buddie’s debut record Diving hits plenty of indie-rock pleasure centers. From the Lvl Up-style guitars vining their way through “Seeker,” to the off-kilter pop sensibilities of early Built To Spill on “In Aquamarine,” to the Hop Along level control of loud and soft on “Tell Me Why,” Buddie are able to scratch several itches at once. These are not simply influences, but the edges of a puzzle songwriter Dan Forrest is able to arrange with a precision that betrays the band’s limited catalogue.

What’s even more impressive, though, is what he is able to do once the borders of his indie-rock palette are set. Few young songwriters are able to so confidently take inspiration and create something wholly their own. Much of that can be attributed to Forrest’s reluctance to shy away from some of songwriting’s more tricky subject matters. While themes of love and friendship do pop up here and there, much of Diving — which comes out out August 4th on Crafted Sounds — exists on a more vivid, motley landscape, where blinded wildebeest and pools of carbon sit comfortably next to Gilmore Girls season 3 and singing Elliot Smith in the bathtub.

The former can be attributed to Forrest’s work as an environmental scientist, a career which he says does not allow him to ignore our climate crisis. Though he was once reticent to write about that issue, Diving sees Forrest tackle it head on. We talked over the phone about this decision, finding their footing as a band, and much more.

The Key: Considering Buddie started as a solo project, what has surrounding yourself with what is now the core of Buddie changed the way you approach the project?

Dan Forrest: We played a lot of the songs off the EP live, so I was playing the songs live with this group, but this is the first time I have recorded anything with these people. Every single time I’ve had a new group of people to play with it’s been a little different, but the people I’m playing with now – Danielle Farly, Brian Thomas, and David Dean – are really awesome. David actually has a solid technical music background, having gone to school for music, so that’s really cool. I have never really worked with anyone who has a lot of knowledge on the theory side of things. Far beyond the basic stuff I know. Me and him have been working the songs out. It has been cool to get his feedback. He will analyze what I’m doing in a song, like “oh you did this thing here and this thing there so it would make sense if we tried something like this”. Getting that feedback is really cool.

TK: This record often blends the specific and the metaphorical, is it easier for you to write about personal experience or larger ideas and themes?

DF: I think I’m a literal person and pretty direct about things. A lot of my lyrics are very straight forward for the most part and I think before I was trying to overcompensate for that. I think I was trying to put some fancy metaphor on the top because that is what happens in a lot of the songs I listen to, where the lyrics are really vague. I was just learning by example, but now that I have been doing it for longer and feel more confident I don’t feel the need to change my voice for the lyrics. I can just be myself and write what I’m feeling. If that means using a metaphor to get my point across and it comes naturally that way then I’ll do it but if the idea is sitting in my head pretty straight forward then I’ll do that too. I don’t usually overthink the lyrics and go back and edit them too often, usually it’s just whatever comes out.

TK: The album opener, “Boiler” strikes me as one of the more moody, metaphorical songs, kind of setting up Diving’s palette in an effective way, when in the process was that written and when did it become clear you wanted that to open the record?

DF: It was maybe the second or third song we wrote and recorded. We didn’t really decide album order till we had all the songs ready to go. It just felt right. It opens with those big power chords and gets right into it. It’s on the shorter side but still packs a punch without getting boring. It’s not one of the more complicated songs that you might have to dive into and listen to a couple times to get all the ideas.

TK: Songs like “Heartbeat” and “Tell Me Why” have pretty clear messages, how important is it for you to get a specific point of view across in your songs?

DF: That is something that I was pretty hesitant to approach initially.  I didn’t necessarily want to make the social or political commentary very obvious. Previously, I was more likely to cloud them in metaphors but now it is a little more obvious. Just in the course of working in environmental science and ecology and getting older, I feel like it’s more important to speak my mind. If I’m going to be dedicating a lot of my free time to writing songs for this project it should align with the other parts of my life.

We’ve tried to be more conscious in everything we do as a band. It’s not so easy when you are a band just starting out to be able to get political messages across and actually make a difference in your community, but we are trying to find different ways to do that even as just a smaller band in Philly, whether it be through trying to have fundraising shows or just spreading information. One obvious way to do it is talking about it in our songs, which is what I’m trying to do.

TK: Why do you think, in general, environmentalism is not necessarily a topic many songs touch on specifically?

DF: It is a hard thing to write about in a song. It feels very far removed from people’s everyday life. Ever since I started studying eight years ago, it’s been on my mind every day. But for a lot of people that’s not necessarily the case. It’s hard to make it relatable in a song so for a while I stayed away. Then I realized that if I think about it all the time, I should be writing it into my songs. I hope that I managed to make it relatable in some way.

I always hope people can connect with the lyrics. I feel confident in the music and people being able to relate to that but it is almost like an experiment for me in just putting down environmental advocacy in my lyrics and seeing if people actually latch onto that and relate to it. More people are talking about it than ever before, obviously, and it is in the news sometimes, but it isn’t in music very often. Sometimes when people do it, it can come across as a little hokey. Folk songs can obviously do it very well but they approach it in a narrative way which is very different from writing a pop-rock song about it.

TK: You’ve mentioned more folk and pop influences making their way into Buddie, what music specifically influenced you and the band throughout the writing and recording process?

DF: A lot of local indie and rock bands, especially anything coming from Exploding in Sound or Double Double Whammy like Lvl Up and Philly’s 2nd Grade.  I got really into Fountains of Wayne’s “Mexican Wine” recently as well. The pop writing in that song is so good. I think I’ve learned a lot about pop sensibilities from listening to them. Big Thief is another modern band that blends folk and rock really well which I look to for inspiration. Looking further back, I grew up going to the Philly Folk Festival every summer and every band that comes there, whether it be bluegrass or folk or singer-songwriter, are all still on my mind as I write.

TK: Was there any point during the process of writing and recording Diving where you felt like you were pushing yourself out of your comfort zone?

DF: The first four-song session we did was very much still in our comfort zone. Something like the really heavy “Boiler”-type rock song is something that just comes really naturally. Then there’s “Circle”, which falls in the other category of songs I feel comfortable with, the more direct, straightforward pop-rock songs. But the second batch of songs we recorded, especially the closer of the album, “Garden Grow”, was us trying to incorporate a bunch of influences rather than be so direct about the type of song we were writing.

Trying to write that song was definitely a learning experience, knowing it didn’t exactly fit one genre and kind of goes all over the place. Trying to weave all those things together was definitely something new to me. Songs like “Heartbeat” and “In Aquamarine” were some of my favorite songs we recorded and really captured our sound best. They gave me an idea of what we will be aiming for on future releases. Overall, there was definitely a lot of finding ourselves on this album.