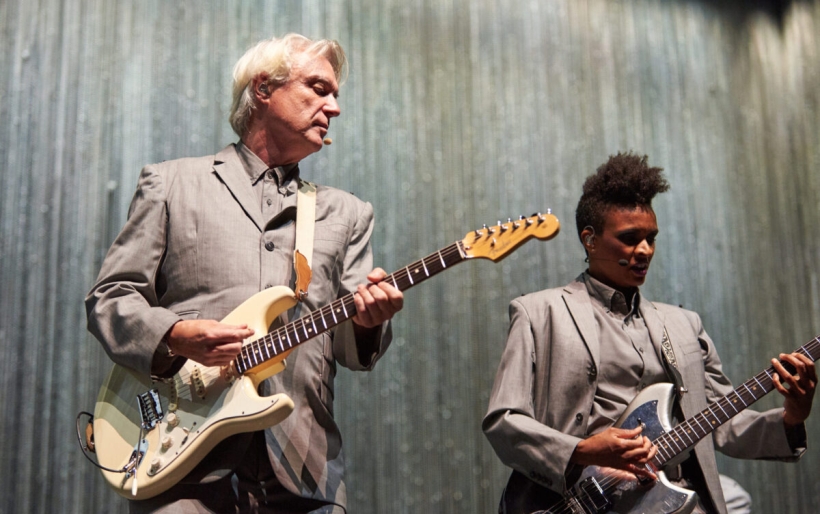 As the band strikes up a rendition of Janelle Monae‘s “Hell You Talmbout,” David Byrne emerges from behind a chain-mail curtain to join them in a new teaser for his upcoming concert film, David Byrne’s American Utopia, directed by Spike Lee.

The teaser, filmed during Byrne’s recent Broadway residency, showcases the artist and ensemble dancing barefoot in the shadows, while Byrne’s voiceover speaks of hope. “Despite all that’s happened and despite what’s still happening, there’s still possibility. James Baldwin said, ‘I still believe that we can do with this country something that has not been done before.'”

American Utopia ran on Broadway from last October to this past February. It featured Byrne speaking on the state of America, mixed in with performances of songs spanning from the first Talking Heads record up to Byrne’s most recent solo album, also called American Utopia. Byrne also passed through XPN Fest in 2018 to support the album.

All of the musicians, including the drummers, had handheld instruments with which they could move around the stage. “I realized, ‘If I can afford it, I can liberate the drums,'” Byrne told Rolling Stone last year. “It’ll mean there will be a lot more players. … Of course, I’m a fan of drumline and samba schools and second line, and all that. So I love that feeling of the whole group of musicians being able to move and make formations and do all that. It has this great feeling. So I thought, ‘If I can do that but bring it into this kind of musical context, that would be really exciting.'”