John Peel, Philadelphia, and the Land of the Lost - WXPN | Vinyl At Heart 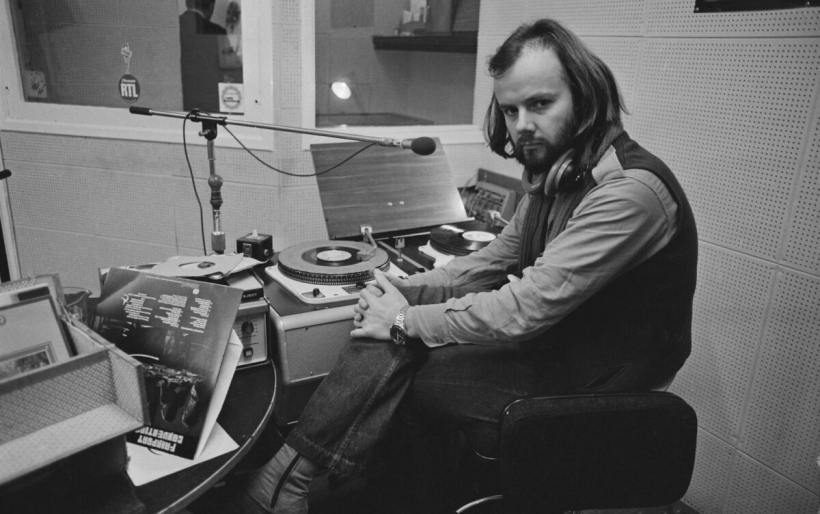 John Peel, Philadelphia, and the Land of the Lost

“I just want to hear something I haven’t heard before.” — John Peel

There will never be another John Peel. The BBC Radio 1 DJ reigned over the airwaves from 1967 until his sudden death in 2004, bringing an extraordinary amount of music not just to the UK but to the entire world.

Normally when we talk about somebody liking “all music,” there are exceptions, but in Peel’s case he really did play everything. If you tuned into his show you’d hear anything from folk to hip hop to grindcore, ska, punk, and new wave. Lots of punk and new wave.

What he is perhaps best known for are the thousands of BBC-hosted sets named after him. Recording a Peel Session was very much one of the highest honors that could be bestowed on a musician. It was an exclusive club of a couple thousand members that were all championed by Peel. It didn’t necessarily make you famous – looking at the full list, there are a lot of rather obscure names – but it definitely made you feel famous to be in the company of bands like Nirvana, The Specials, Sonic Youth, Captain Beefheart, David Bowie, The Fall, Jimi Hendrix, The Disposable Heroes of Hiphoprisy, and so many, many more.

“For me it feels unbelievably incredible,” Elizabeth Fiend told The Key. Her band More Fiends recorded a Peel Session in 1989. That was during the funky Philadelphia punk group’s first European tour, a three month long slog that took them across the continent and even gave them a front row seat when the Berlin Wall came toppling down on the 9th of November of that year. You can read more about that on Elizabeth and Allen Fiend’s website.

Sixteen years after his death, Peel is remembered as an innovator, a cultural icon, a quintessential voice on British radio, and most of all as a music fan to the highest degree. One of his biggest fans is WXPN’s Robert Drake from Land of the Lost, who has been doing an annual memorial show around the time of Peel’s August 30th birthday. This year’s tribute will take place on Friday the 28th of August.

“John Peel passed away suddenly in October 2004. That following August, I decided to celebrate [him] as his birth date fell near the August edition of Land Of The Lost,” Drake told The Key. “I’ve been remembering John Peel every August since, making this year my 16th year of Peel Sessions on LOTL.”

Asked what Peel meant to him as a DJ, Drake said that “John was part of my inspiration to be in radio …. [He] had an amazing ear when it came to discovering new music.” He brought up Peel’s history as a pirate radio DJ and how, “After the government shut down the pirate radio stations, they launched BBC 1 to cater to the fans of all the new music out there and brought John over to terrestrial radio.”

While More Fiends never got to meet Peel – he wasn’t always around when the recording happened – they corresponded with him via the mail, which is how they were invited to do a session in the first place. According to Elizabeth Fiend, it all happened after the band’s first album Yo Asphalt Head was reviewed in the punk zine of record Maximum Rocknroll: “We got a letter in the mail from John Peel – it obviously came from him but it looked like it was written by a teenage girl, it had big flowery handwriting – that said, ‘We read your review in Maximum Rocknroll and you sound really interesting, can you send us the album?’”

Peel and his BBC cohorts apparently liked what they heard, and invited the band to come to England. It just so happened that More Fiends were already planning on heading over there, though as Allen Fiend recalled, “I think we did the European tour because we did the Peel Session. They set up the session and it was, ‘I guess we’ll try and fit a whole tour around it.’ And we did.” No matter what brought them there initially, on October 22nd, 1989 they arrived at the BBC Maida Vale Studios in London.

The previous day the band had recorded at Southern – the studio-of-choice of legendary anarcho punk band Crass and many others – and those tracks plus their Peel Session made up Toad Lickin’, their second LP. According to Elizabeth Fiend, they were there until three in the morning and had to be at the BBC just a few hours later.

She told the story about how when they were loading in their equipment a producer walked up and was effusively gushing about how excited he was to meet them: “He said, ‘Oh, I’ve been looking so forward to you, I’m your biggest fan! I love you guys. You are so incredible!’ And I was, like, ‘Really? This seems really weird.’” They quickly realized he thought they were someone a bit more famous. “We were the wrong band,” Elizabeth Fiend said with a laugh.

Once that got figured out, More Fiends were ushered into studio MV4 – the Fiends recalled that it was the same room where David Bowie and Bing Crosby did their famous rendition of “Little Drummer Boy” – and over the course of the day recorded four tracks with producer Dale Griffin, a founding member of Mott the Hoople.

Because it’s the BBC and because it’s John Peel, there are a lot archived radio shows online, including the one when he played the More Fiends session for the first time. On the recording you hear how he’s struck by a line in the song “Vinyl Grind” where Elizabeth Fiend says, “Did you ever notice the lower a guy wears his guitar the more of a jerk he is?”

“That’s a very good point, actually! I’d not thought about it, but by and large I think it is true,” Peel exclaims. “I must note that down and use it myself: drop it into conversation at some of the smart parties I go to and everybody says, ‘Yes, yes, he’s right, he’s absolutely right.'” It’s a very fun and endearing moment in the show and something Elizabeth Fiend cherishes.

More Fiends were one of very few Philadelphia area bands to do a Peel Session. The others are psych rockers Bardo Pond (2001 and 2004), cult favorites Ween (1992 and 1993), and the late guitarist Jack Rose (2004). An Albatross, the chaotic noise rock band that started in Wilkes Barre and now calls Philly home, were a favorite of Peel’s and recorded a set at the BBC in March of 2005, approximately five months after he passed away.

An interesting fact about John Peel was his absolute love for grindcore and other extreme music. He had Napalm Death, Agathocles, Extreme Noise Terror, and other similar bands do multiple Peel Sessions and was very excited to have that stuff on the radio. When More Fiends recorded, their drummer at the time was Rich Poor aka Rich Hoak, who a couple years later would join grind giants Brutal Truth. While that band never made it to the BBC studios, Peel did play their records on the air.

For XPN’s Drake, the Peel Sessions are “amazing time capsule moments of radio” taken from the almost four decades Peel was on the BBC. He pointed out how Peel constantly stayed relevant and how influential his radio show was when it came to breaking new bands. That started in the late 60s when Peel was first on the air and continued throughout his entire career. It was especially true in the mid-to-late 70s and the birth of the punk and new wave scenes, when Peel’s show was one of the only spots on the dial you could hear bands that sounded like that.

When Drake started on the air in the mid-80s, he was certainly indebted to Peel and other DJs who came before him. As he told The Key: “In a way, John Peel really helped nurture the music showcased on Land of the Lost. If it wasn’t for him, many of the artists would never have become household names today.”

It was Peel’s energy and his almost obsessive need to dig deep and discover new bands that’s stayed with Elizabeth Fiend over the past 30 years. “If he liked what you did or even thought it was interesting or unique or had something that was important to him, he would promote you,” she explained. “And that’s completely unlike anybody else. That to me is the most special thing about John Peel.”