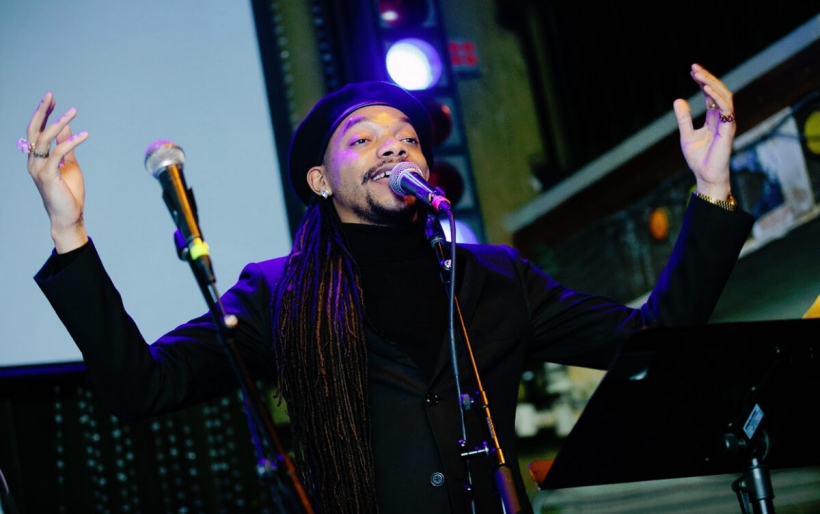 From the opening seconds of V. Shayne Frederick‘s latest EP, Blacklight, it’s immediately evident that this isn’t an ordinary Philly jazz project. The vocalist, pianist, and bandleader cackles and asks us, directly: “What y’all thinking?” before launching the devilishly soulful opening track, “Black Nile.” While the project is clearly steeped in the jazz tradition, its deviations from the genre define it just as much as its traditional jazz-based chords, riffs, and grooves.

The final track, “Dream,” takes another left turn away from “Always.” It opens with discordant strings and some unsettling pizzicato lines, before the hazy sky of strings clears, making way for Frederick’s vocals: “Dream, and it might come true,” he sings, reminiscent of legendary crooners like Nat King Cole. And then, right as the track feels like it’s fading toward the end, a bustling Latin flair suddenly breaks out, resplendent with a gorgeous flute feature (performed by Mervin Toussaint).

Even though the project dips its toes into Latin grooves, hip-hop, and experimental jazz, Frederick’s vocals are constantly (and rightfully) at the forefront. His stunning baritone effortlessly soars; sometimes a seductive whisper, sometimes an exuberant belt. The one track where he takes a backseat — “Softly, As In a Morning Sunrise” — is carried by the brilliant instrumental work, specifically Adam Faulk on keys and Khary Abdul-Shaheed on drums.